Verizon this week unveiled a new “Above Unlimited” plan which will become available starting Monday, June 18. On top of that, the nation’s biggest carrier also announced that from now on subscribes on a family plan will be able to mix and match unlimited plans to suit their own personal needs.

Joining the previous Go Unlimited and Beyond Unlimited, the Above Unlimited plan starts at $95 per month for a single line. Comparatively, the others start at $75 and $85 respectively.

Verizon redefines the meaning of unlimited once again

Above Unlimited provides users with 75GB of data a month before throttling, or 20GB of usage as a hot spot. You also get 500GB of Verizon Cloud storage and five TravelPasses per month that you can use while traveling abroad.

In contrast, the Beyond Unlimited plan only comes with 22GB of data before throttling and 15GB of hotspot usage. There’s no cloud storage or TravelPassess.

As for the Go Unlimited plan, this one is subject to throttling immediately, all video is compressed down to 480p quality, and the hotspot speeds are limited to 600Kbps. So the $20 difference might be worth it if you use a lot of data or tend to travel a lot. Although I don’t think there are so many people who use up 75GB of data on a monthly basis. But I might be wrong.

Check out the table to get a better idea of the differences between plans: 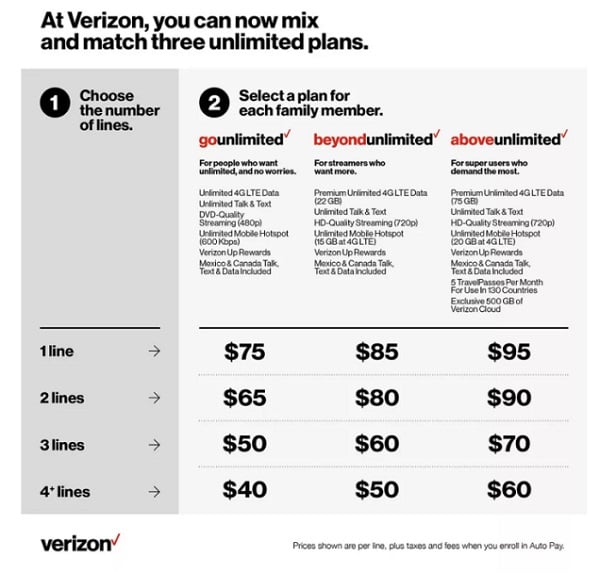 On top of the new Above Unlimited Plan, Verizon also has a helpful new update to share for families. Those on unlimited plans can now opt to have different phones on different plan versions. Previously, families had to choose a single plan for every line.

But with the new system in place, parents can choose to put their kids on a cheaper plan, while they go for the more comprehensive format.

Also note that for families with four lines of service, the Above Unlimited costs $60/per person, as opposed to $95 if you’re a single user.

The ability to mix and match different unlimited plans on your family plan will go into effect on Monday, June 18. At the same time as the new Above Unlimited plan.