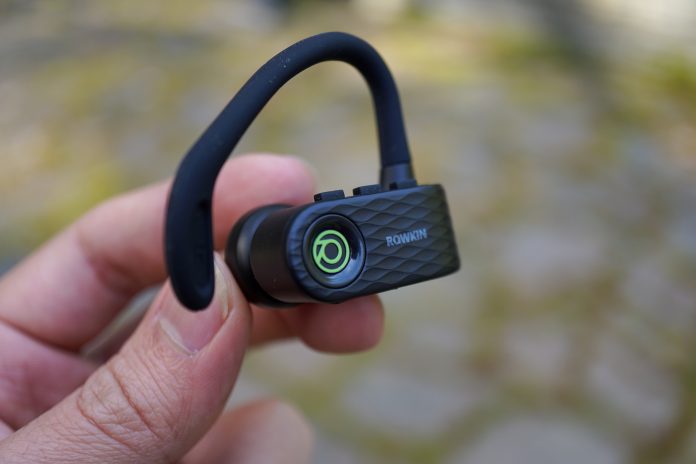 If you’ve done some searching for a pair of truly wireless earbuds, chances are you’ve come across Rowkin. The up-and-coming company has a few solutions under its belt now, with no signs of stopping. We particularly like how competitive it is with cost. A good pair of true wireless earbuds doesn’t come cheap, and Rowkin makes a valiant attempt to get there with affordable pricing.

But usually, this practice results in considerable compromise. Well, Rowkin has passed us its latest device, the sporty Surge Charge, to examine where they’re at today. Let’s find out if this is the best pair of true wireless earbud for active lifestyles. 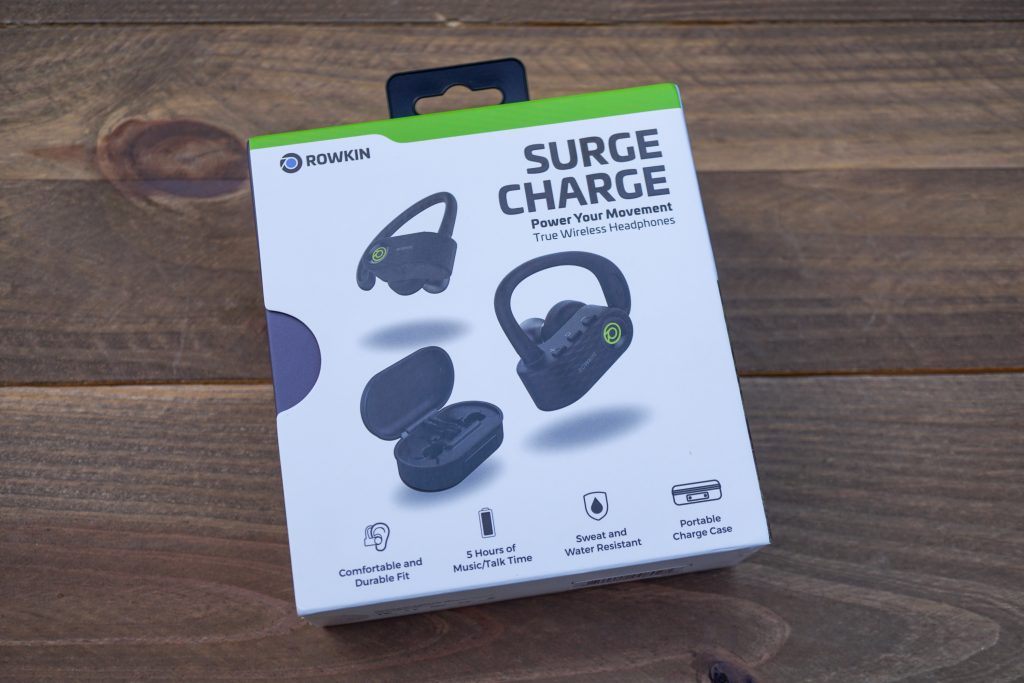 As we’ve suggested, the Surge Charge isn’t your typical true wireless earbud. They are completely wire-free, but the design is tuned for use with exercise as opposed to just sitting. This is immediately apparent when you get them in your hands.

They make no effort whatsoever in being small-as-possible earbuds like most of the competition (though, Rowkin does offer this kind of alternative for casual use). The earpiece housing is rectangular and bulky, and you’ll see an imposing ear glide shoot out from the top.

We’ve had various true wireless earbuds come our way here at AndroidGuys, and the Surge Charge are at the bottom of the “premium” scale. But we must remind ourselves about Rowkin’s intent. Activity earbuds are more about function than fashion, and we can understand that we can’t have it all at this price-point. The main goal is that they work well (which we’ll get into soon).

As far as the packaging, it’s pretty basic stuff. You’re given multiple size ear tips, USB-A to microUSB charging cable, and a carrying/charging case. The earbuds can function without the case if you’re looking to save some dough. Rowkin offers them sans the case for $20 less (just called the Surge).

A downside comes out of the fact that the Surge wasn’t originally designed with a case in mind. Most true wireless earbuds have pin connections with their case slots, which allows for effortless charging. The Surge have to be charged with a microUSB cable, therefore, Rowkin had to incorporate corresponding short microUSB cables in the case’s interior. You must plug in the earbuds to charge, each time. Does it work? Yes. Does it lack in finesse? Definitely.

Another gripe is how thick the case is. One of the best qualities of true wireless earbuds is their pocketability, and the Surge Charge‘s case kills that. You’ll be limited to carrying the system by hand (and there’s no wrist strap unfortunately) or in a travel bag.

We’ve touched on the atypical independence of the Surge’s earpieces. This continues on to their function. For instance, each has its own 3-button set of playback controls. The buttons do the same thing, the user can just choose which earpiece to press.

Unfortunately, this also means that when you get started, you have to turn each earpiece on separately (long-press the middle button). This operation could’ve been sidestepped if the earpieces communicated with the case. Typical true wireless earbuds know to turn off and charge when placed in their case and turn on when removed. The Surge Charge gets none of that. It’s only when you plug them in to charge that they shut off (but not vice versa). If you don’t plug them in, they’ll just remain in the state they were. There isn’t even an automatic shutoff feature if you stop playback and forget to manually turn them off.

The Surge Charge achieve their ultimate goal of being exceptional activity earbuds. Although bulky, the stiff but moldable ear glides are crucial for the superior security that the earbuds promise for any kind of workout. Once donned with the ear glides tightly pushed against the ear, the earpiece aren’t going to go anywhere. Granted, it’s a two-hand operation to insert and get the glide seated.

The in-ear fit could be better. We like how the nozzle angles to naturally insert, but there’s a thick bit between the earpiece and ear tip (we assume it’s the audio driver) that causes a little discomfort over time.

Additionally, we weren’t able to get the best seal with any of the three pairs of supplied tips. It would’ve been nice for Rowkin to include more selection to avoid this with picky ears. Many companies also include foam tips as they isolate noise better.

Where the clunky build benefits these earbuds is in electronic proficiency. The Surge Charge handles its wireless connection like a champ. We haven’t seen this level of Bluetooth stability before in a true wireless earbud. Even the best choices today suffer from a shotty signal, even when the mobile device is nearby. We didn’t have any playback cutoff while exercising with our phone in our pocket. The signal is unfazed until you walk several feet away from the source. Excellent.

Battery life isn’t as exceptional as the Bluetooth performance. At about 5 hours of playback in one charge, it’s above average but still in “true wireless earbud” territory. The charging case also has more capacity than we’re used to seeing, able to charge the earbuds five times over. 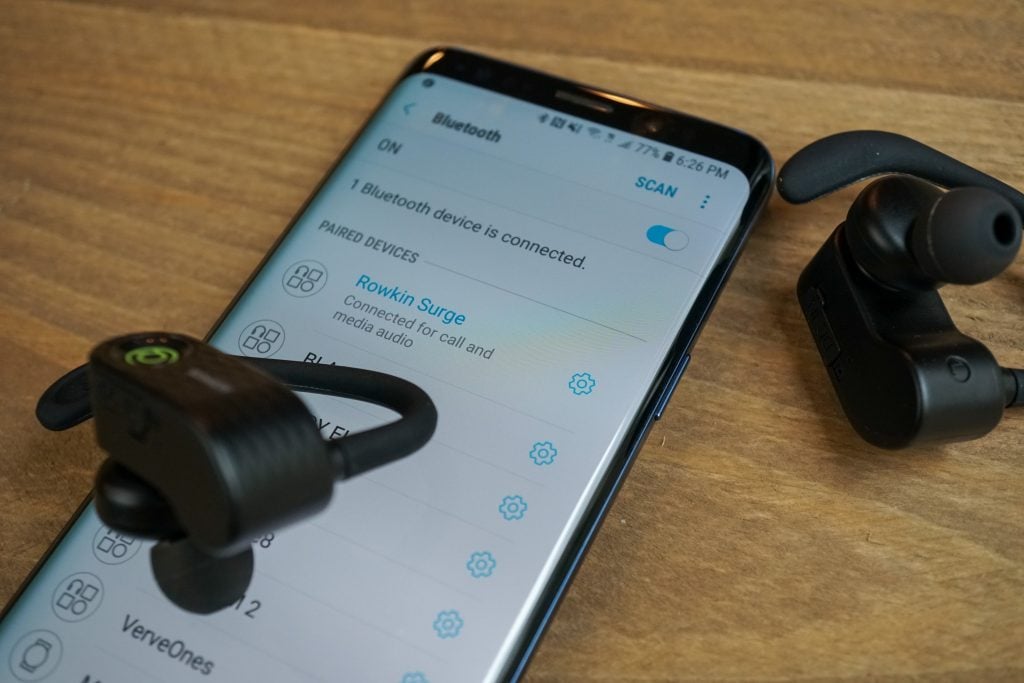 We don’t generally reserve high expectations for the audio of “affordable” earbuds. There’s more out there that sound sub-par than great. Granted, true wireless earbuds have quite the challenge and still is a new market.

With that said, the Surge’s audio quality surprised us. We were so glad to a clear delivery rather than the muddle we can get from cheaper earbuds. Bass, in particular, is authoritative and robust. It does punch and memorable impact without being bloaty or interfering with the lower mid-range, a skill that many fail at. The mid-range is also nicely done. It isn’t pushed back like in the common V-shape frequency curve. While not as in-your-face as the bass, its contribution to the sound signature is significant.

The treble was our least favorite range, which is average in comparison to the rest. It lacks in detail and reach (i.e. higher frequency sparkle), but gets the job done. Soundstage and dynamics were also nothing to write home about. The sound space has some height and slight width. We’re just glad it’s not a completely, non-dimensional in-your-head kind of reproduction. 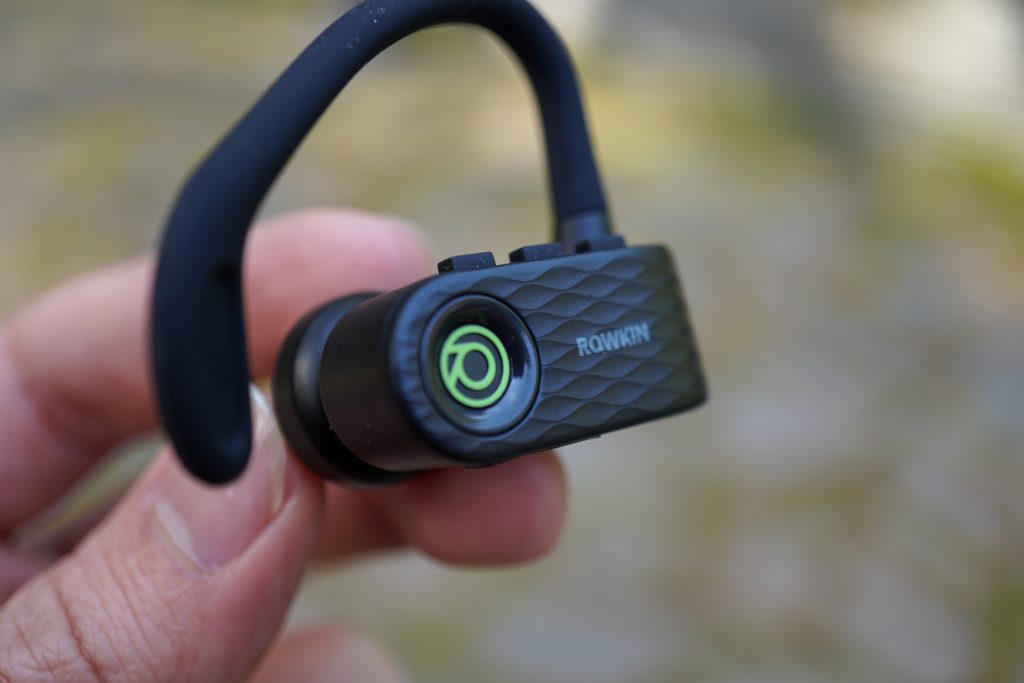 The Surge Charge is a clunky true wireless earbud in every angle of its design, from the blocky form of the earpieces (and case) to the wired charging. But it’s not a bad option when seeing it for what it is. On the contrary, it’s a very good pair when it comes to function and price – two huge factors in this kind of earbud. They have a superior Bluetooth connection, are secure on the ears, and sound great overall. If you have an active lifestyle and can overlook the design quirks, then the Surge Charge should be a strong consideration.