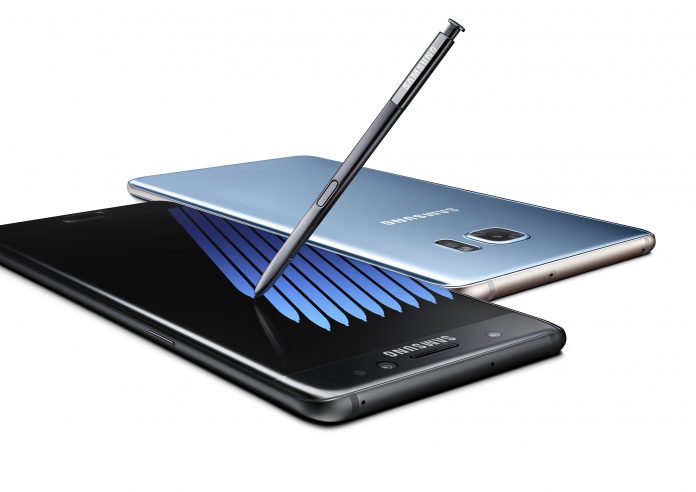 No one can deny that the new Note 7 looks a bit too much like the S7 Edge from earlier in the year. They’re 0.2” apart in display size and both have dual curved edges, about all the same specs, and the same build. A big differentiating factor is of course the stylus, but we could argue that it’s more of a novelty feature.

Has Samsung pulled a fast one on us? Well, not completely. While there aren’t many, some worthy additions are in fact present. You just have peek closer. Let’s run through them.

The most standout new feature in the Note 7 is definitely its biometric reading ability, from the addition of an iris scanner on the front of the phone.

Some may argue that the fingerprint reader already gave us a way to quickly unlock our phones or skip through passwords. But there’s just something really cool and futuristic about having the phone perform a retinal scan for access. Plus there’s the convenience of not having to shift your grip to touch the fingerprint spot. With iris, just look at your phone (which you’re already doing) and you’re in.

Type-C is the new USB standard and everyone is jumping in this year. For some reason, Samsung didn’t get the memo on the Galaxy S7, but it’s finally caught up on the Note 7.

The most glaring benefit of Type-C is that the port is symmetric, so you can plug in the charger without looking to make sure that the correct side is up. The USB 3.1 support also means quicker data transfers and more power output (including being able to use your phone to charge another device).

There’s a new Gorilla Glass panel in town, and its release lined up nicely with the timeframe of the Note 7. Corning’s biggest focus on Gorilla Glass 5 was durability against drops. The company claims that the new panel is likely to indure a 1.6 meter (or roughly shoulder-height) drop onto “hard, rough surfaces” without turning into the dreadful series of spiderweb cracks.

In a move that seems to throw a bone to the Note’s legacy power users, Samsung’s base storage has been doubled to 64GB on the Note 7. It was a pleasant and generous surprise.

While the Galaxy S7 also had microSD expansion, it was iffy on adoptable storage (in which the OS treats the separate storages as one bucket). We’re not sure the Note 7’s stance on the matter, but the fact that its internal storage is plentiful should alleviate the concern for many folks.

One of the Note 7’s important features that could easily slip by is high dynamic range (HDR) playback. HDR capability is the new wave in televisions today, and the Note 7 has become the first mobile device to sport it. This technology targets image quality, by producing better colors and wider contrasts (bright whites and deep blacks).

The catch is that the content needs to support it for you to see the benefit. Fortunately, Amazon is already on it. The company has already announced that Amazon Prime will provide HDR video streaming for the Note 7. That doesn’t cover everything, but at least you’ll be future proof.

The Note 7 is certainly not without some new software features. Samsung tends to throw tricks into TouchWiz, just for the sake of it, but the ones on the Note 7 may actually be worthwhile for a lot of users. The standout feature is the ability to create a gif from a snap from any video that’s playing.

You can also use that fancy S-PEN to highlight text for a quick translation to a different language, magnify any content on the fly, or pin notes to the Always-On display. These nice additions give the stylus more purpose, but then again, you shouldn’t need it to do these things.

Are these updates enough to make you salivate over the Note 7 and want to chuck your current Samsung phone? Probably not for Galaxy S7 users, but if you have an S6 or Note 5, keep in mind that you’ll get water resistance, microSD expansion, a much bigger battery, and an improved camera on top of that. Let us know where you stand in the comments below!