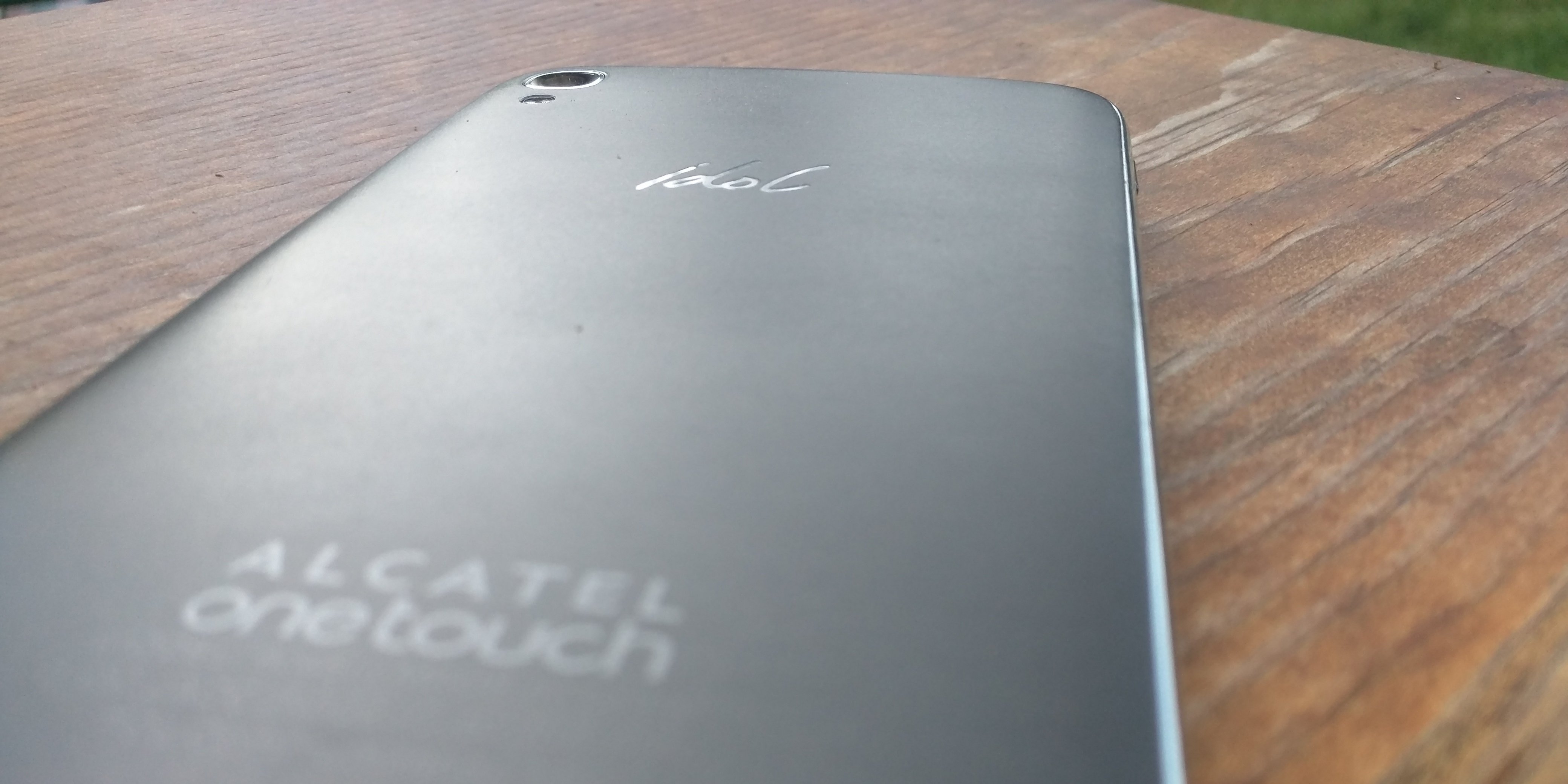 Alcatel OneTouch has been creating some pretty nice budget handsets recently, and after seeing their new Idol 3 at MWC, I knew I had to give it a try. So I took the SIM card out of my Nexus 6 and fully switched over to the Idol 3 for the last week. I put it through its paces to see just what this budget smartphone could handle.

[alert color=”green”]The unit I used to conduct this review was running on pre-release software. Please keep in mind that any problems I faced may be fixed by the phone’s release or by a future software update.[/alert] [spacer color=”264C84″ icon=”fa-android”] 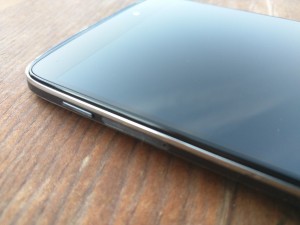 The first thing that I noticed about the Idol 3 was that it looked pretty nice for a $250 phone. Sure, there was no metal chassis or leather back, but the phone felt extremely solid. It did not bend or creak and the build quality was great. The chrome accents along the top and bottom on the edge of the phone give it a little something so that it stands out against the crowd of black slate phones. Since they are plastic, they might pick up some scratches and dings, but I have not seen any on my unit so far. Also, the back is made of a brushed plastic that looks more premium and feels better than normal glossy plastic.

One of my favorite design features on the Idol 3 is the recessed front facing speakers on the top and bottom of the phone. This helps to break up the otherwise flat device and give it some dimension.

One on the most notable things about the Idol 3’s look is that it is perfectly symmetrical. If you turned the phone completely upside down, you would almost have no idea if it wasn’t for the front-facing camera switching places. Also, the Idol 3 only weighs in at 140 grams, which makes this phone feel extremely light. This helps with their Reversible UI feature that I will get to soon. For $250, you are getting a well made device that feels and looks great. 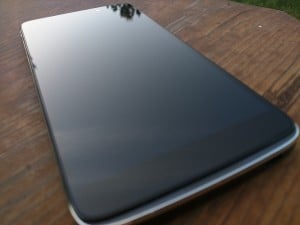 The Idol 3 comes with a 5.5″ full-HD display at a pixel density of 401 ppi. Alcatel touts that this display is enhanced by Technicolor and the colors are supposed to appear more real. I have to say that this screen was enjoyable to look at. Everything looked amazing on the display and colors looked great. I was not expecting a display this nice on a $250 phone, and I am glad Alcatel proved me wrong.

This is one of the brightest phone displays I have ever used. I ended up keeping the brightness around 25-30% and it was plenty bright for me. You will definitely have no trouble viewing this screen in direct sunlight.

The Idol 3 uses an IPS display, and even though I prefer AMOLED, I like the way this screen looks. Blacks looks dark, whites were bright, and colors were natural without being overpowering. Also, viewing angles are amazing. Even at extreme angles, I saw no lack of detail or color. 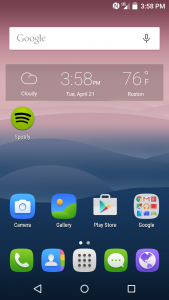 If you could not tell from the fact I own a Nexus 6, I love stock Android. When I first powered on the Idol 3, I was worried because what I saw looked like a pretty heavily skinned version of Android. Thankfully, I was completely wrong. The Idol 3 is running on Android 5.0.2, and while it may not look extremely stock, few things are actually changed.

Alcatel OneTouch skinned the icons and replaced some of the stock apps, but most of Android was left completely untouched. And the apps that were replaced performed just as well as stock Google apps. Since the tweaks were light, the Idol 3 is able to run Android Lollipop very well. There are also a few software tweaks that actually added to the experience. Double-tap to sleep and wake is a welcome addition because of that terrible power button placement. It works extremely well, and I rarely found myself having to double-tap more than once.

My favorite change is the Reversible UI feature. What this features does is orient the UI to whatever direction you are holding the phone. It allows the screen to rotate completely around so you are never actually holding the phone upside down. I thought this was the biggest gimmick until I actually tried it.

As it turns out I tend to take my phone out of my pocked upside down about half of the time, but I never noticed it on the Idol 3. I would just double-tap the screen and Android would be rotated around. Since there is a speaker and microphone at both ends of the device, you can answer phone calls with the device upside down, too. Also, the animation that happens with you flip the phone around is pretty sweet. The Reversible UI is a feature that I hope other OEMs include on their phones in the future.

The Idol 3 comes with a 13 MP main camera with a Sony sensor and an 8 MP front-facing camera. The camera software has most of the features a normal user is looking for plus some extras. There is an HDR mode, a panorama mode, a manual mode, a time-lapse mode, a bar-code scanner, and one called “Face beauty” which basically smooths out your skin and may make selfies look a little better.

The phone took pictures extremely fast, with close to no shutter lag. Of course, the real test of a phone’s camera is the kind of pictures it can take. I found that the Idol 3’s camera was okay. Pictures taken outside were pretty good, although they are not going to be blowing anyone away. In pictues with bright colors, detail is sometimes lost in the colors. Pictures taken inside turned out about the same.

Low light pictures is where the Idol 3 struggled a bit. They lost some details and had a little extra noise. That being said, if you are just looking for a phone to take pictures to post on social media or share with friends, the Idol 3’s camera will suit you just fine. 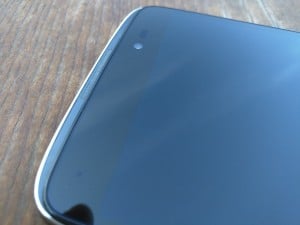 One of the big features of the Idol 3 is the dual front-facing speakers powered by JBL audio. After listening to music daily on this phone, I have to say that I am impressed. The speakers can get loud, but do not seem to suffer from much distortion at the high volumes. Most importantly, the sound is amazing, even through headphones.

The bass is not as strong or deep as you will find in something like Boomsound on the HTC One, but mids and highs are nice and clear. Alcatel touted that the sound quality was very good, and I imagine that anyone who listens to music from the Idol 3 will agree.

The Idol 3 is running on a 64-bit octa-core Snapdragon 615, with four cores clocked at 1 GHz and four clocked at 1.5 GHz,  coupled with 2GB of RAM. I found that, for the most part, performance was smooth. I could scroll through apps, recents, and web pages with minimal slowdowns. However, there were a few times when the Idol 3 would just seem to randomly slow down. It was still usable, but animations and scrolling seemed more choppy and less fluid. Unfortunately, I do not know what caused these dips in performance.

You should not expect to play any graphically intense games on the Idol 3, but it should handle most casual games pretty well. I tried it out with Limbo and suffered no slowdowns at all. This phone will not be winning any speed tests or benchmark scores, but the performance was better than I expected and fluid most of the time.

The Idol 3 is powered by a 2910 mAh battery. I am what you would consider a “power user” when it comes to my phone. It is rare for me to finish a day with less than 4 hours of screen on time for my phone. If a phone can survive my days, it should be able to survive anyones. I have three email accounts that pull down every five minutes. I also watch around an hour of YouTube over WiFi and stream at least a hour of music over LTE.

The Idol 3 took my daily activities just fine and I had no worries about running out of battery before I got home. If you are a light to moderate user, you will definitely be pleased with the Idol 3’s battery life as it will easily last you through the day with battery to spare. If you are a heavier user like me, then I would wager the Idol 3 could handle your lifestyle just as well, maybe with less battery left over though. If you want to see the daily breakdown for battery life, you can check out all five days in the tabs below.

The biggest test I have for a phone is will I miss it when I stop using it? The answer for the Idol 3 is undoubtedly “Yes!”

It is definitely not a powerhouse, but the experience of using it is great. I will miss some of the features like the Reversible UI and double-tap to wake immediately. Of course, it is not perfect. Performance suffered from time to time and the camera is okay at best, but for $250, I would put the Alcatel OneTouch Idol 3 as the best budget flagship of 2015.

If you are in the market for an affordable phone that will still provide a great experience, the Idol 3 should be at the top of your list.