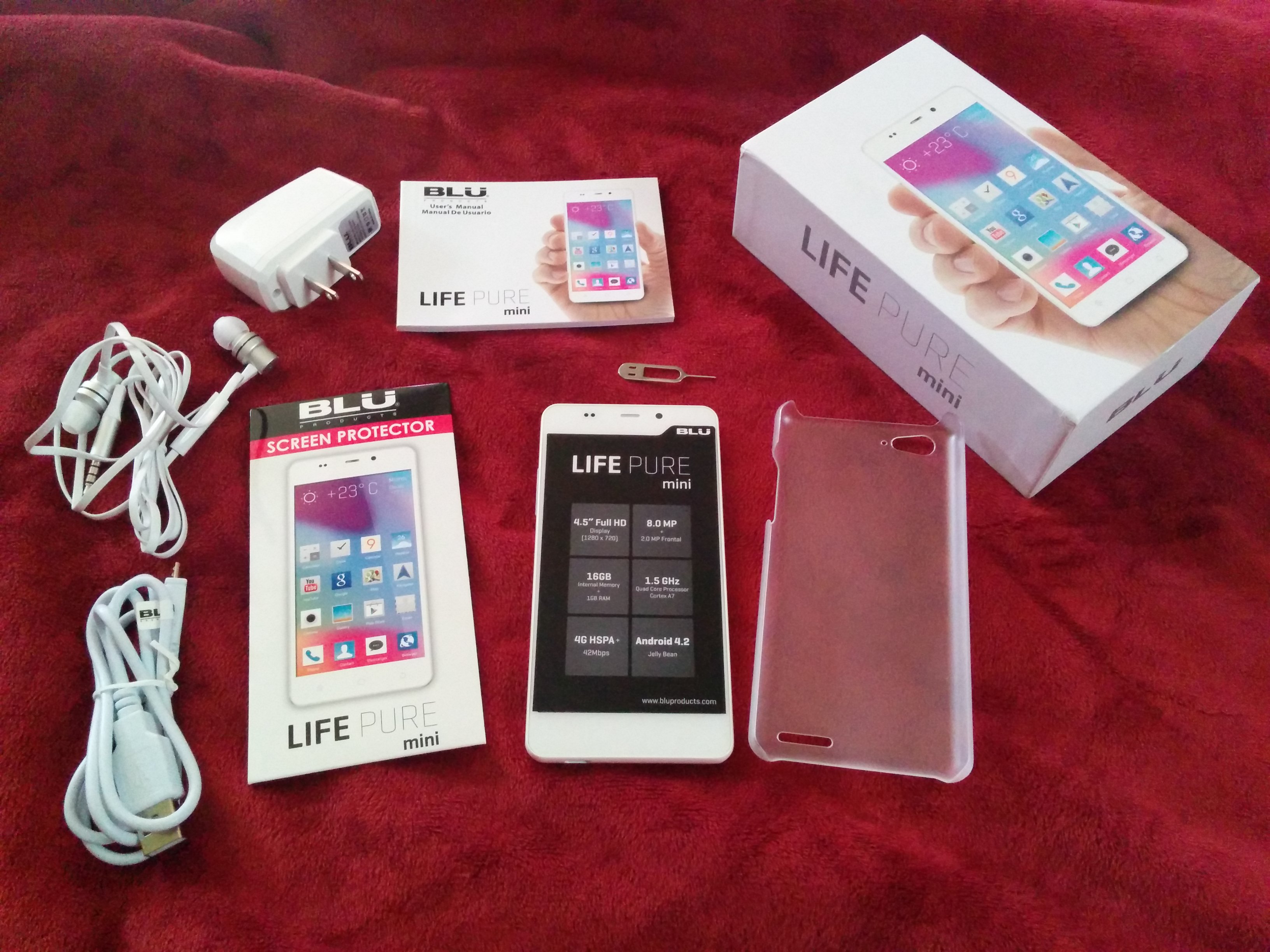 I must admit, I wasn’t sure what to expect when I first received my unit. But at the sub $300 price point, I was not expecting anywhere near the level of quality with which I was greeted. Not only is the presentation everything you’ve come to expect from traditional manufacturers, but after pulling all of the pieces from the box, I found the absolute classiest move by any device manufacturer I’ve seen to date. Included with the device were a fitted screen protector and a simple translucent case for the device. Gone are the days of leaving the factory screen protector on the device while you wait for your aftermarket protectors to arrive in the mail, nay, they’ve literally included everything you need to get your started.

The Life Pure mini looks like the big brother of the iPhone 5C, but don’t let that thought deter you. It’s extremely sturdy, has a good weight (~150 g), and a minimalistic nearly badge-less design  – save for the lone “BLU” symbol above the iPod-esque “16GB” toward the bottom of the device’s rear. The only other accents on the back are the half-inch speaker grate on bottom right and the 8 MP camera with LED flash, top left. The charging port is located on the bottom, but it’s upside down and positioned almost entirely to the left side, so you can forget about using most universal USB media docks. Volume rocker is exactly where Nexus and Galaxy users would expect, thumb-height on the left side, but the power/sleep button resides at the top on the right, balancing the 3.5 mm headphone jack to its left rather than opposite the volume rocker, which instead you’ll find the ejectable SIM tray. After using the Galaxy S 4 and Nexus 5 as my main devices for so long, the form-factor of a device with a 4.5 inch display is a much welcome change. It just fits perfectly in the hand, even comfortably using it one-handed vegging out on the couch and not straining fingers to keep hold when reaching a far corner of the display. Music sounds fine on the speaker, you couldn’t expect more from a device in this price range, it’s loud enough even to hear in a moving vehicle without sounding distorted, although some notifications do tend to sound distorted and odd.

The software developers are obviously paying attention to custom ROMs as a lot of features you’ve come to expect from aftermarket firmware are packed in. Swiping left on the notification shade flips to quick settings toggles, of which there is no shortage. Now, I must say, they’ve obviously been taking cues from Apple in a couple areas; the above mentions design, but more importantly, the stock launcher on the Life Pure mini, isn’t anything you’ve come to expect out of Android.

There’s no app drawer, so if you’re like me and you have over 100 apps, things can get pretty messy. You do, however, have the ability to create folders, which hold up to 12 apps each, and if can get past it’s shortcomings the themes and tweaks are pretty beautiful. The grid on each screen is 4 across 3 deep, above which you have a weather “widget” pulling down on which reveals a clock and the lock screen. The horizontal recent applications option is only accessible by pushing the home key from the stock home screen. Long pressing the home button activates Google Now. However if you’re running a third party launcher, for some reason long pressing the home key summons the stock Android multitasking screen.

Now, this is Android 4.2.1, which seems to cause some compatibility issues with certain market apps, although side-loading has yet to fail. Although it’s a relatively recent, if not short-lived Android release, there are shades of older Android version baked in. First, the included stock Android keyboard (AOSP) seems to have been taken from either 4.0 or 4.1 as it does not have Swype style gesture typing capabilities. The expandable notifications seem to be completely broken. There’s no discernible rhyme or reason to when they are expanded or are not, and no way to manually expand or compress. The gesture control for the gallery app is very interesting and has quite a bit of potential. To activate it from the gallery, hover your open hand about a foot from the screen until a hand icon appears on the screen, then you can leaf left and right through the photos by moving your hand in either direction.

As you can see from the screenshot in the slideshow below, 1 GB of RAM may not be enough for a power user. While uploading a photo to ArtsCow to create a custom Android mousepad, I received the “Unable to complete previous operation due to low memory” notification. it was easily rectified by closing the other running apps, but it’s definitely something to keep in mind.

All above observations were made in the first 2 days of use. After observing the way that the phone works out of the box, I decided to change gears and install my favorite third-party launcher, and most of my complaints disappeared. For instance, the horizontal, iPhone-esque multi-tasking application is no longer accessible from a third party launcher, and long-pressing the home key no longer activates Google Now, it seems just activating a new launcher as default brings back the stock Android app switcher, and like most, it is activated by long-pressing the home key. No idea why this is disabled while the stock launcher is default, but it’s not truly an issue as long as there is a way to bring it back. After downloading the new launcher I even seem to be getting a bit better battery life. It’s going to be rough to go back to the form factor of the Nexus 5 after this. If you’re not the type of user who believes bigger screens are better no matter what the cost, then you will love the size of this device. The Life Pure mini will be a wonderful first Android phone after a transition from iPhone. It’s got plenty of power, and the battery life will be a refreshing change, not to mention to $249 price-tag. This is one of the best devices for the money I’ve seen and I’ve already recommended it to several people. Check out their Amazon store and buy your own, looks like they’re on sale for $219.99 at the moment!