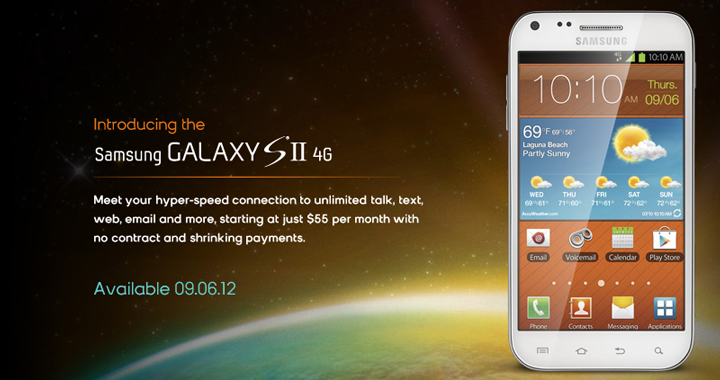 Boost Mobile has announced a pair of Android-powered smartphones from Samsung, both of which are due in September.  Each is a little different from the next and offers something unique to their pre-paid subscriber base.  Generally speaking, one could consider these two to be on the opposite end of the Android spectrum for Boost Mobile.

First up is the Samsung Galaxy S II 4G, an Android 4.0 experience with a a 4.5-inch display, dual-core 1.2GHz processor, 1GB RAM, and 16GB internal storage. Like the Galaxy S II from 2011, this one also comes with an 8-megapixel rear camera, 2-megapixel front-facing camera, and 4G WiMAX connectivity.  Look for this one to arrive September 6 with a $369.99 price tag. 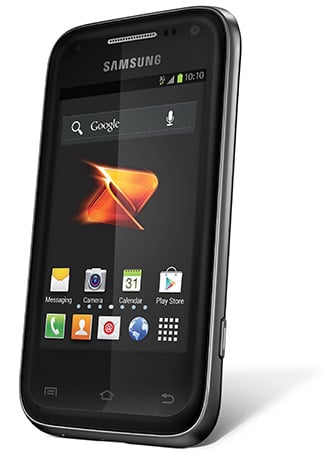 Next up is the Galaxy Rush, another Android 4.0 smartphone, with a 3.5-inch display, 3-megapixel camera, and 1.3-megapixel front-facing camera.  Priced at a much lower $149.99, this guy should be retail stores at the end of September.

Both of these Samsung phones can be paired with Boost Mobile’s no-contract $55 Android Monthly Unlimited plan with Shrinking Payments.  This means that for every six on-time payments (even non-consecutive), the plan shrinks by $5, eventually getting down to $40/month for unlimited nationwide talk, text and picture messaging, and web (2.5GB per month of full-speed data).

“Together with Samsung we continue to launch compelling device options from entry level to 4G-enabled smartphones to meet the evolving needs of our customers,” said Andre Smith, vice president-Boost Mobile. “Launching the award-winning Samsung Galaxy S II 4G marks a defining moment for Boost’s customers craving a portable entertainment powerhouse on a no-contract unlimited plan that shrinks to as low as $40 a month.”

Offered for the first time on a no-contract carrier in the United States, the Galaxy S II 4G provides an unmatched entertainment experience for speed and hypermedia enthusiasts without the stress of a contract. Samsung Galaxy S II 4G will be available starting Sept. 6 for $369.99 (excluding taxes) at Boost Mobile’s exclusive retail stores, select independent wireless dealer locations nationwide and at www.boostmobile.com with free shipping. It will also be available late September in select national retail locations.

This feature-packed Android smartphone will operate on Sprint’s 3G and 4G (WiMAXTM) networks, bringing 4G speeds to Boost Mobile customers in 71 markets across the country with average upload speeds of 3-6Mbps and bursts of more than 10Mbps. As well as access to Sprint’s nationwide 3G network which reaches more than 278 million people.

The Galaxy S II 4G, available in white and black, is loaded with a brilliant oversized 4.52-inch Super AMOLED™ Plus touchscreen, dual cameras and the Samsung Exynos™ processor, one of the fastest dual-core processors in the industry. The phone’s rich color display allows, Boost customers to snap bright photos, record full HD video on the go, and browse the Web at blazing fast 4G speeds in 71 markets nationwide. For an additional $10 a month customers can take advantage of the phone’s mobile hotspot capability, which can create a personal Wi-Fi network on the go, with connections for up to five Wi-Fi® devices.

Additional key features of the Samsung Galaxy S II include:

Like the Samsung Galaxy S II 4G, the Galaxy Rush can be paired with Boost Mobile’s no-contract $55 Android Monthly Unlimited plan with Shrinking Payments. For every six on-time payments, the cost of Boost Mobile’s Monthly Unlimited plan shrinks by $5, eventually getting down to as low as $40 a month for unlimited nationwide talk, text and picture messaging, Web[2], email and calls to 411. Payments do not need to be consecutive to qualify for the next savings milestone.

Consumers who love to talk and text should check out the Samsung Array, available on Sept. 4 for $59.99 (excluding taxes) at Boost Mobile’s exclusive retail stores, select independent wireless dealer locations nationwide and at www.boostmobile.com with free shipping. It will also be available late September in select national retail locations. The Samsung Array is a slim, stylish device with a slide-out QWERTY that is perfect for the texter who wants a 2.0MP camera and Web-browsing capability at an affordable price. The slim form factor makes the handset compact and easy to fit in a pocket. Its 2.4-inch LCD screen it is large enough to see pictures and read texts clearly. The device will also be available on Boost Mobile’s $45 Talk & Text Unlimited Plan with Shrinking Payments.

Samsung, Galaxy, Rush, Array, Exynos and Super AMOLED are trademarks of Samsung Electronics Co., Ltd.  Other company names, product names and marks mentioned herein are the property of their respective owners and may be trademarks or registered trademarks.  “4G” used in connection with the Samsung Galaxy S II 4G refers to the fact that the device is capable of operating on Sprint’s 4G (WiMAX) network.