We learned on Thursday at CES 2016 that Lenovo, one of the largest electronics companies in the world and owner of Motorola, would be shuttering the Motorola name. Lenovo bought Motorola Mobility in early 2014 from Google and ever since, fans have wondered what the future of the brand would be. Lenovo currently already makes phones and owns about 5% of the global market (Motorola accounted for about a third of their sales).

But, where would Motorola’s current line-up of phones fit in? Would Lenovo continue two different brands that make phones in the same price ranges? Would Motorola remain autonomous? When you really start pondering those questions, the decision to drop the Motorola name makes more sense. We’ve seen a lot of reactions in the first few hours since this announcement. Almost all of them negative and almost all of those emotional reactions.

To see the whole picture, we need to start at the beginning. 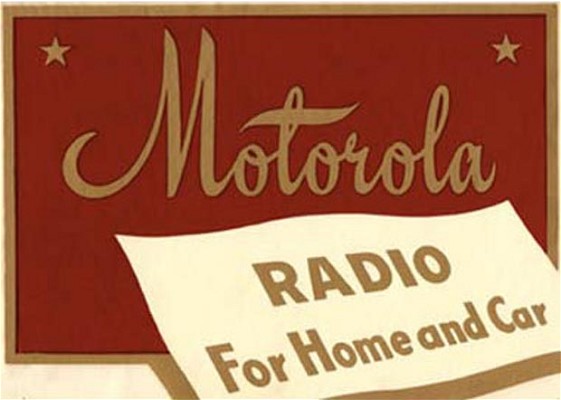 Motorola started in 1928 in Chicago. The first products it produced were called battery eliminators, which allowed battery powered radios to run on home electricity. Its beginnings were humble. It started with only 5 employees and a weekly payroll of $63. After radio eliminators became obsolete, Motorola moved into making some of the first car radios. The ‘Motorola’ branded radio became so popular that the company changed its name from the previously named Galvin Manufacturing Corporation to Motorola Inc.

From there, Motorola began a long string of inventing technology that we still use today. In 1940, it invented the walkie-talkie; in 1946 it was the first company to carry a call over Illinois Bell telephone company’s new car radiotelephone service. Beginning in 1958, they produced radio equipment for NASA which ended up being used in the Apollo 11 mission that brought the first men to the moon. Neil Armstrong spoke his famous “One small step for man, one giant leap for mankind” speech using a Motorola transceiver. 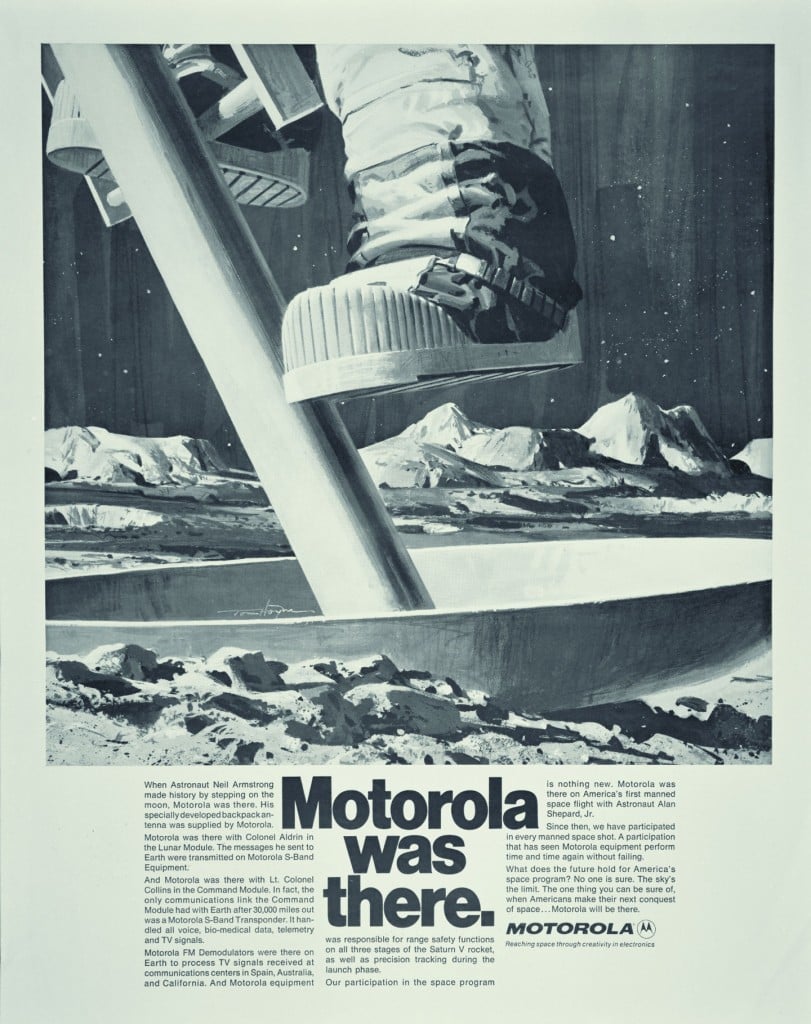 In the 70’s, Motorola showed off the first portable, handheld telephone, and debuted its first 8 bit microprocessor for automobiles, computing and video games. In the 80’s, Motorola released their 32 bit microprocessor. That processor happened to be one of the biggest reasons for the computer revolution of the 80’s and powered computers from Apple, Atari and Hewlett Packard, among others.

1983 was one of the biggest years in Motorola’s history. This was the year that brought us the first cell phone. In September of ’83, the United States FCC approved the DynaTAC 8000X. Just six years later, cellular devices accounted for two-thirds of Motorola’s gross revenue.

1990 brought the Bravo Numeric Pager which became the highest selling pager in the world. A year later Motorola made a huge jump forward when it debuted the prototype for their cell phones that utilized the GSM standard that we still use today. The rest of the 90’s were busy with acquisitions and further leaps forward.

By 2000, Motorola had over 150,000 employees world-wide. In 2003, it introduced the first phone to combine a Linux operating system and Java to create the first real PDA. 2004 brought us one of the most infamous phones of all time, the Motorola Razr. Unfortunately, all was not rosy for Motorola. In 2007, Motorola saw a 1.2 billion dollar loss in the fourth quarter alone. A brain drain at the company saw boring and un-inventive designs come to the marketplace. Motorola fell from 18.4% market share in 2007 to 6% in the first quarter of 2009.

By 2010, Motorola had split into two. Motorola Solutions focused on police radio technologies as well as commercial needs. Motorola Mobility is the company we know today that has produced products like the Moto X and the Moto 360.

In 2011, Motorola Mobility was in trouble. After a series of misses and terrible phone designs, the company was lagging behind companies that were innovating. No longer could it keep up with companies like Samsung and HTC that were dominating the Android space. Google stepped in in 2011 and bought the faltering giant for a little over 12 billion dollars.

Rumors flew at the time about Google’s true motivation behind the purchase. Would Google use Motorola to produce their own hardware for the first time? Were they gearing up for a war with Samsung? With Apple? It turns out that Google wanted Motorola for its patents and their experimental projects like Project Ara. Google soon sold off what remained of Motorola Mobility to Lenovo for only 2.91 billion, almost 10 billion less than they purchased for, two years later.

The purchase of Motorola by Lenovo was announced in January of 2014 and made official on October 30. Lenovo moved quickly re-organizing their new company. In August of 2015, Lenovo announced that it would lay off 10%, or 3,200 people from Motorola due to restructuring. Fast forward to January 2016, the Motorola name would be retired completely with Lenovo opting to brand their phones as “Moto by Lenovo”.

In an interview with CNET, COO Rick Osterloh said “We’ll slowly phase out Motorola and focus on Moto”. Motorola hasn’t used the ‘Motorola’ name on their phones since the 2013 Moto X. Motorola Mobility will continue to exist as an arm within a greater Lenovo company. They will continue to be the “engineering and design engine for all mobile products”, according to a statement by the company.

Still, Lenovo retiring Motorola’s name hurts. The emotional reaction was immediate and strong. Motorola was a strong American company that helped the US win World War II and put a man on the moon. To have it go away at the hands of a Beijing backed company stings.

But Lenovo is doing the right thing.

Lenovo’s stated intent with the Moto purchase was to get into the United States market. They’re already big in computers and now it wants to dominate phones in the same way. There are few more efficient ways to enter a market than buy an established player at a bargain price to use their business connections, purchasing power and established business relationships to leverage their own brand. If all Lenovo wanted to do was make a few bucks, they make have kept the Motorola name, but they’re in it for the long haul.

You don’t become a Samsung or Apple by selling someone else’s name.

So, where do we go from here? Lenovo will continue to sell the premium Moto X line and call it ‘Moto X by Lenovo’. It will also enter their Vibe line into the market in a larger way. The Vibe line of phones are budget phones normally around the one hundred dollar price point. You’ll see a lot of these unlocked and on sale straight from Lenovo or through carriers like Boost Mobile.

What’s unclear now are what happens to products that overlap. It seems silly to kill the ultra-popular Moto E and G lines so we’ll most likely see at least one more generation of Moto E by Lenovo and Moto G by Lenovo, but after that, it’s anyone’s guess. We’ll almost definitely see the Moto 360 continue and improve. It leads the Android Wear market currently, and the only Lenovo smartwatch has been a prototype. Lenovo has stated it wants to cover every segment of the market with its products. Whether that’s with a Lenovo or Moto branded product is yet to be seen.

What is clear, however, is that Lenovo has a lot of work to do. Android enthusiasts are pretty smart and a large part of the Moto X buyers. They pay attention to things like Superfish. If that name rings a bell, it’s because Lenovo got slammed in the press for installing Superfish onto their computers. It has been described as adware by some. Things like this have undoubtedly damaged their reputation with consumers. Can we trust them not to install software like this on Motorola phones? 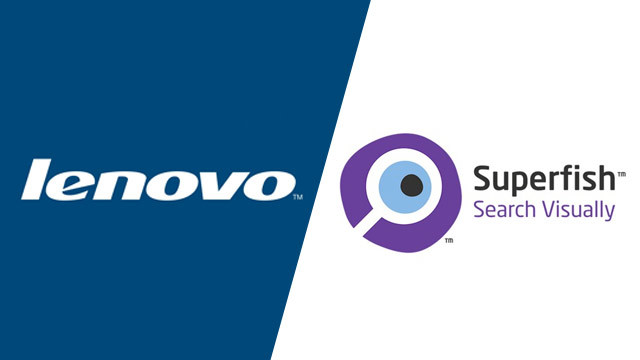 Losing a company name that has been around for almost a hundred years is never a positive thing. Some, if not most, develop emotional attachments to their products and the companies that make them. To see something you care about going away frankly sucks. What you have to realize is that the Motorola you thought you knew hasn’t existed in a long time. The electronics powerhouse that innovated everything from radios, to television diodes, to mobile phones has been gone for years. The only way for Motorola to survive is within Lenovo. Living in Motorola’s shadow doesn’t help Lenovo at all.

Use the comment section down below to voice your opinion. Do you agree with this article? Disagree with it? Tell us and add in your favorite Motorola device or memory.