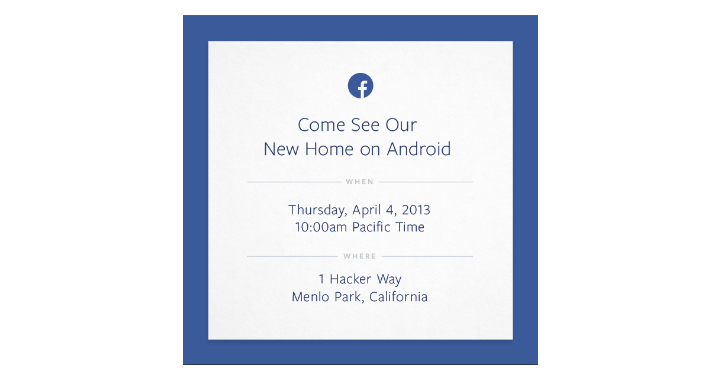 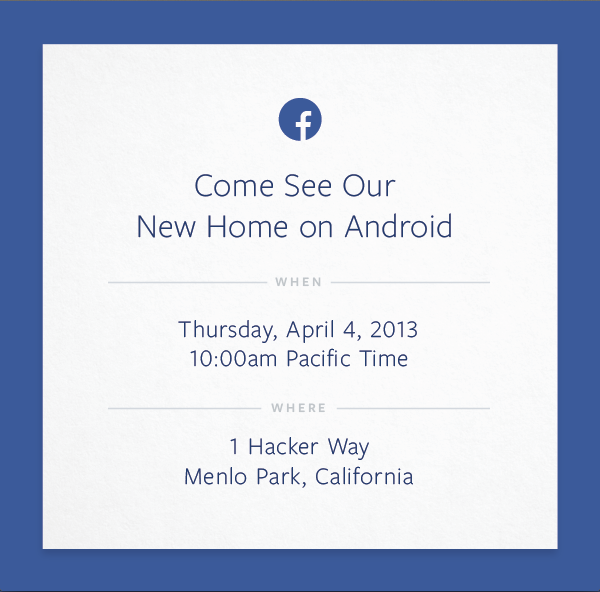 Well, this is certainly interesting stuff. Facebook just dropped an invitation in our inbox, asking for us to “Come See Our New Home on Android”.

Most likely this is the unveiling of a new, refreshed Android application that falls in line with the recent chances to the overall web experience.

Just for giggles, we’ll remind you that Facebook phone rumors have been bubbling to the surface again over the last few weeks. An HTC “Myst” has been getting some traction as of late with specs that call for a 4.3-inch 720P HD display, dual-core 1.5GHz processor, 1GB RAM, and 5-megapixel rear camera. The front side will feature a 1.6-megapixel camera and the Myst will also get the standard fare of connectivity (LTE and HSPA as well. We would also assume a suite of Facebook apps will come with this experience.

According to Tech Crunch sources, the project could fall under the name of “Facebook Home”. Considering the teaser mentions a “new home on Android” this makes a bit of sense. Further, it sounds as if the overall user interface could be a skinned launcher. Able to run the full suite of Android apps, the UI would be quick access to Facebook apps and services.

It’s worth noting that return shuttles are not slated to begin until three hours after the 10AM start time. Sounds like Facebook might have penciled in an hour for attendees to get their hands on the device?

Will we see a new Facebook app on April 4 or is it the next generation of Facebook phone?