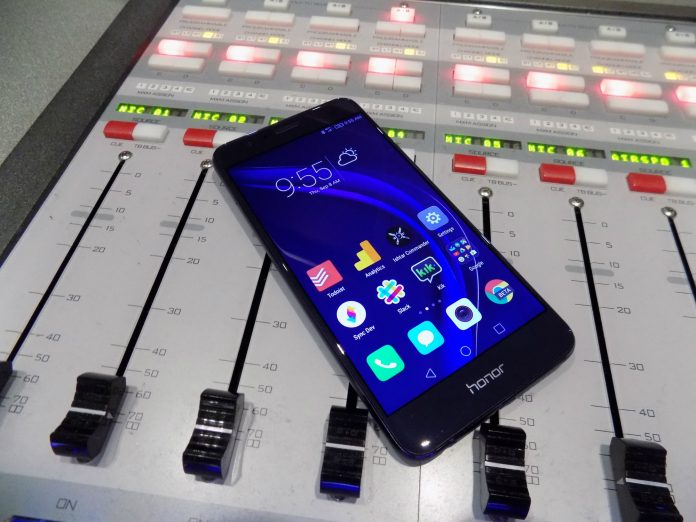 2016 will be known as the year of the budget flagship device with the release of the ZTE Axon 7, OnePlus 3, and the Huawei Honor 8. We recently got our hands on the Honor 8 and while our full review isn’t ready just yet, we do have some initial impressions to pass along.

Huawei is starting its push into the United States and the likes of LG and Sony should be worried. It has shown that it can be a true powerhouse in Asian markets and now Huawei taking what its learned there and bringing it to our shores. With build materials rivaling the Samsung Galaxy S7 and one of the most interesting takes on mobile software, the Honor 8 is unlike anything else on the market right now.

Everything down to the packaging was well thought out by Huawei. The phone slots into the box instead of sitting atop of the books, charger, and cable like every other device on the market. It’s these little things that show Huawei is focused on doing things differently. Not every change is for the better, but it is truly focused on making its own phone, a big departure from the Google-guided Nexus 6P of last year. 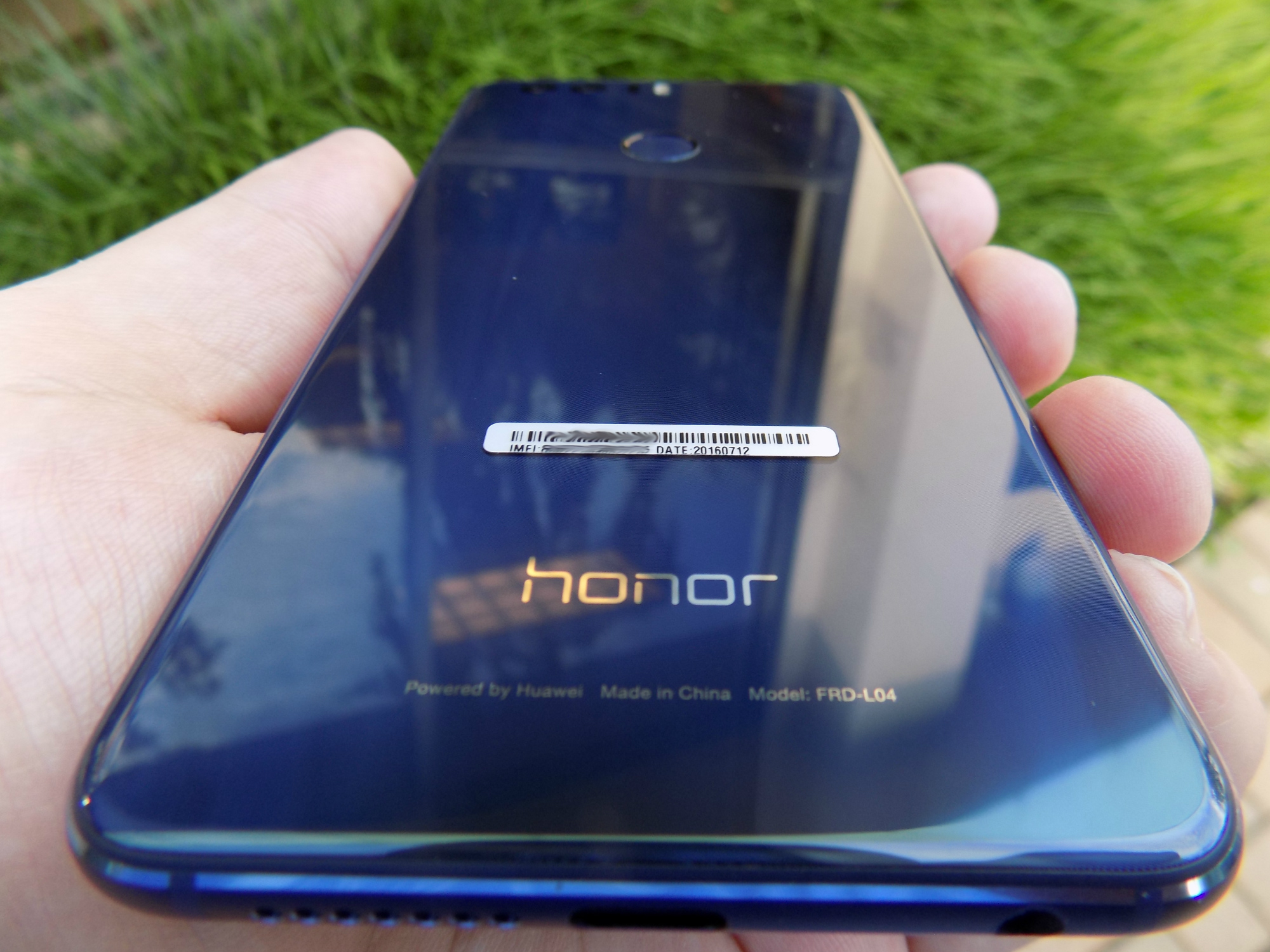 Wow. I knew that the build quality and materials on the Honor 8 were supposed to be good, but I can honestly say that I’m blown away. The Honor 8 falls just short of the Samsung Galaxy S7 in terms of build quality. But, It’s pretty close. The phone definitely channels the S7 with its glass and metal build, while keeping a more rounded edge. Those who handled the phone in our short time with it mentioned how much the sides looked and felt like an iPhone. The Honor 8 may not feel as dense or solid as the S7 but it does weigh the almost the exact same, 153 oz for the Honor 8 and 152 oz for the S7. Both phones are also remarkably close in size. The Honor 8 is a few millimeters taller and wider and a half a millimeter thinner. After using a Nexus 6P for a few days, I was blown away how light the Honor 8 felt the first time I picked it up. 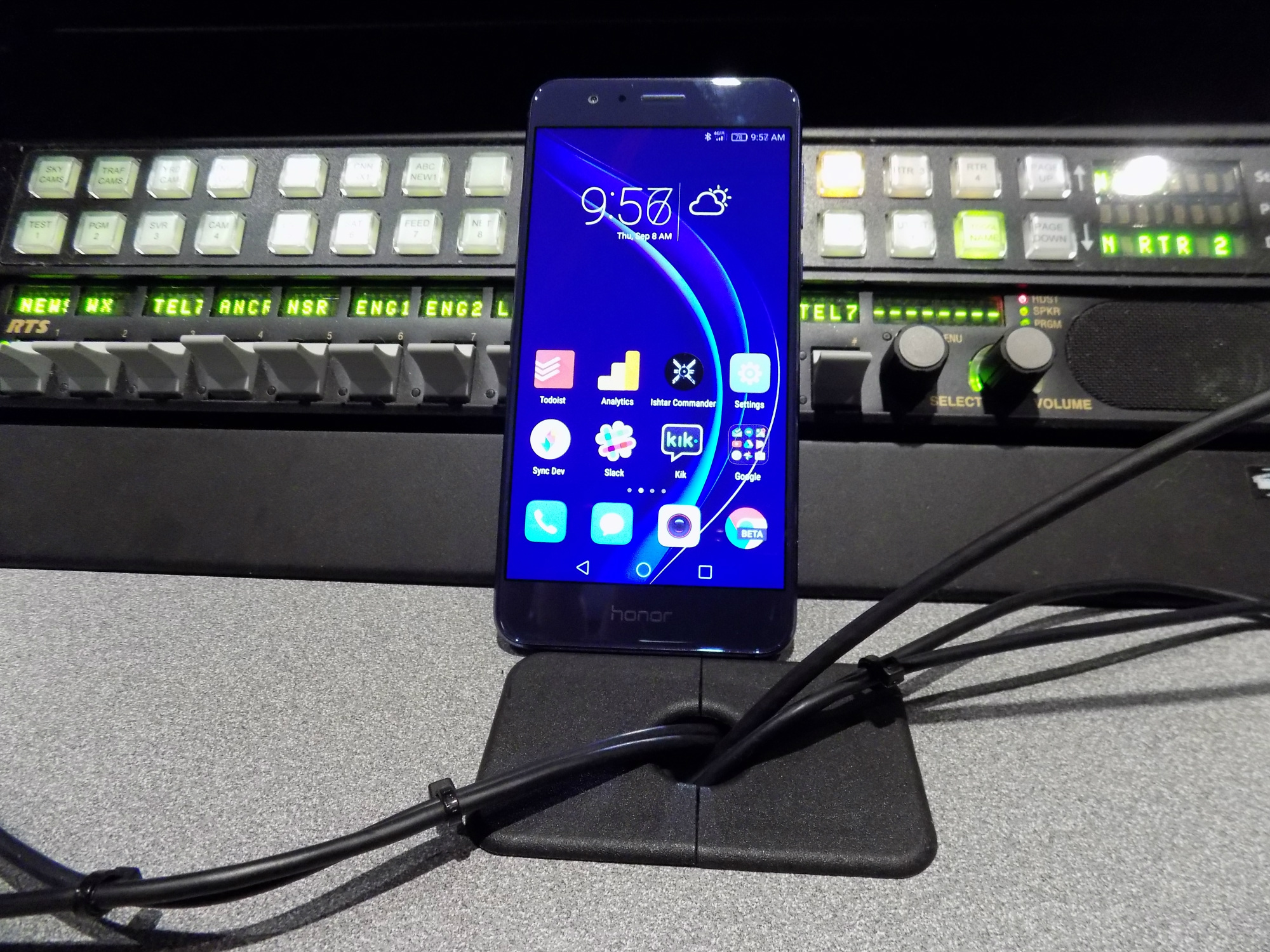 The bezels are slim and the power and volume buttons are clicky. These are two things that can truly ruin the experience with a phone and Huawei did well here. The bottom chin isn’t massive and the top of the phone is just big enough to hold the speaker and sensors. Overall I’d say it’s a pretty compact device that can easily be used in one hand.

Even though the Honor 8 looks excellent and feels great in the hand, I do wonder about how well it will hold up to scratches and falls. Phones like this tend to be fragile and I can tell my behavior changes when I’m using them as a daily driver. Added onto the suspected fragility of the device is how slippery it is. It reminds me a lot of the Samsung Galaxy S6 which is notorious for sliding off level surfaces. You won’t be able to just let this sit on your leg or a pillow because it will slide off as I found out in my first 24 hours with the phone. I find it ridiculous that this is even an issue but yes, there is a 3.5mm jack for your wired headphones.

After only a small amount of time playing with the Honor 8, I feel like I could write entire books about software customizations that Huawei made atop of Android 6.0. The Honor 8 runs EMUI, or Emotion UI 4.1. If you want Android customization with all of the charms of iOS (no app drawer!) then EMUI might be for you.

To be honest, I’ve found myself a little bored with Stock Android as of late so EMUI is a nice change of pace. EMUI touches every part of the OS much like LG’s skin but goes even further with its customization. You will not find settings and options where you normally would in Stock Android. Sometimes that’s for the better, sometimes not. The notification shade is redesigned to have two panes, one for notification and one for shortcuts that you get to with a swipe to the right. The shortcuts are what you would expect to find nested in the Stock Android notification shade, WifI, Bluetooth, Auto-rotate and the rest. One of the coolest things that Huawei did here, and it does extend to some other places like the messaging app, is give your notifications more of a timeline feel with times and an order to how your notifications show up. It may not be any different in practice to how stock 6.0 shows notifications, but it does make you feel more on top of your day when looked at in this view. The lack of the app drawer does mean that apps are everywhere and there are plenty preloaded onto the Honor 8. The Tools folder has 9 preloaded apps for everything from the Weather app to the Mirror app. We’re also greeted by a Top Apps folder that has such crapware as Facebook, Twitter, Shazam, Booking.com, News Republic, Lyft, and a few Huawei apps. I know adding these apps in are money-makers for Huawei and if that’s what keeps the cost down, I’m alright with adding these in as long as they can be uninstalled- which these can.

We’ll delve deeper into the software here in our full review, but suffice to say, if you’re looking for something different, EMUI certainly offers a different experience. So far, I’m impressed. There have been a few little hiccups like some struggles scrolling through long lists but that might be chalked up to the phone breaking in. I’m trying to keep in mind that this is a $400 phone but it feels like it’s punching above its weight. The build quality feels like a device twice the price and will challenge the best from Samsung, LG, Sony, and HTC.