Today saw the announcement that Microsoft had updated its Bing app for Android to act like Google Now on Tap. Google Now on tap is a feature that will let users instantly find information and will debut in Android Marshmallow later this year.

While this cool feature is available now instead of in a few months, there’s still one major problem with it: it uses Bing.

Bing was released in June, 2009. Since then, Microsoft has done everything they can to bring people to use it. Yet, ask anyone and you’ll likely get one of three responses:

Despite Microsoft dumping millions of dollars to market Bing as the better search engine, it’s still not very popular.

“Wait a sec’, you’re an Editor for an Android website, of course you’re going to trash Bing and support Google! Everyone, grab your comment pitchforks and torches!”

Alright, you bring up a good point. Think I’m wrong? Let’s take a look at the data then shall we?

Search Engine Land, a website dedicated to search engines (that wasn’t obvious?) reports usage data for search engines regularly. Their most recent post regarding search engine popularity actually points to Bing’s recent 20% market share of use, based on comScore reports, while Google sits at their steady 64% market share.

However, in October, Search Engine Land felt that comScore’s reports seemed a little off, and didn’t really tell the whole story. So, they did a survey of their own. And boy were their results interesting: 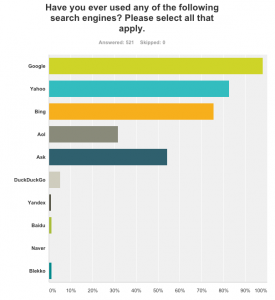 Hold on one moment fellow citizen. Search Engine Land explains the above results were search engines users had tried. So sure, 76% of the people polled said they had tried Bing before. The next question is, how many of those same people actually use Bing on a regular basis? 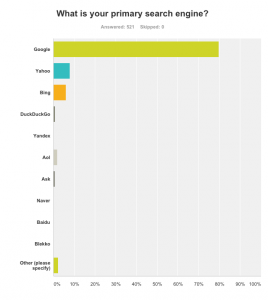 Lo-and-behold, 80% of those people use Google as their primary search engine, while Bing sits at 6%. Further, the icing on the cake is, of that percentage, 87% of Bing users come from Internet Explorer (I’m not even going to go into why that matters)!

You have to give Microsoft credit: they’ve grown Bing a lot sing 2009, and have put a lot of energy into making it a more attractive option (literally) than Google. Yet, while we hear that Bing is now on your Android Wear, or now has “snapshots” (the Google Now on Tap competitor), it still won’t gain the upper hand, at least anytime soon.

Why (my, you ask a lot of questions…)? Well, I’m not sure. Something something algorithms. I can tell you one thing: Google has their Knowledge Graph. I don’t work for them, so I don’t know how it works exactly. I do know that it’s why I can hold a conversation with Google (First asking “How far is Los Angeles?”  with direction results, and then asking “What’s the weather like there?”, and then getting weather results for L.A.). Or why it can tell me how old Tom Hanks is, or why I can ask it how late the store in front of me is open. I also know that it’s why Google Now on Tap will be better than Bing snapshots by the time Android Marshmallow comes out.

Fine. Let’s hold our own survey, shall we? If after that you still don’t believe me, then “Bing” directions to me using my name. (Disclaimer: The author is not held responsible for any parties that get lost using Bing.)


Note: Select outbound links may include affiliate tracking codes and AndroidGuys may receive compensation for purchases. Read our policy. As an Amazon Associate we earn from qualifying purchases.