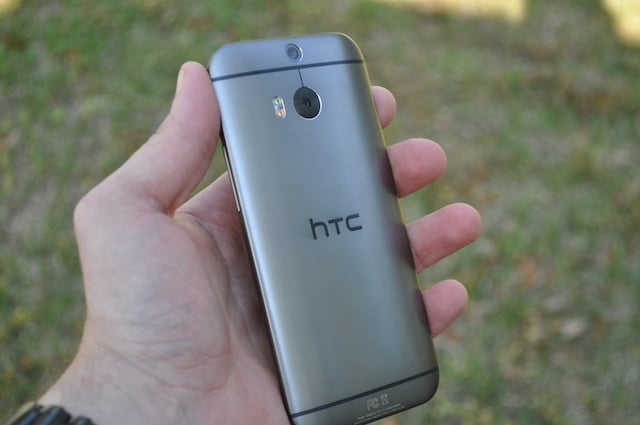 Today we have gotten our hands on the all new HTC One M8, T-Mobile variant.  The phone is based upon it’s predecessor, the One M7, which was voted “Best Smartphone” by GSMA at Mobile World Congress back in February, talk about a lot of shoes to fill.  However, HTC’s new flagship has jumped leaps and bounds in order to fill those shoes by creating a metal masterpiece that is both elegant and inviting. 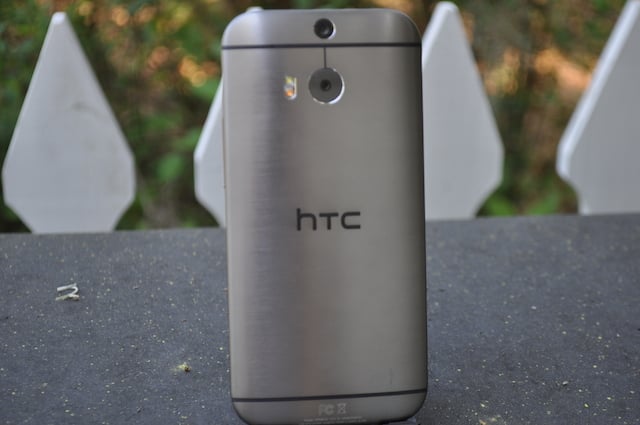 Jumping from 70% to 90% metal, the phone just begs for you to hold it.  When holding the phone, it feels like a flagship phone should, priceless.  Weighing in at 160 grams it is heavier compared to other flagship phones, however this is no plastic square with a screen, it is a smooth rounded piece of art.

Onto the Display, the One is protecting its Super LCD3 1080p display with Corning Gorilla Glass 3.The screen itself hasn’t changed much as far as technology goes, however 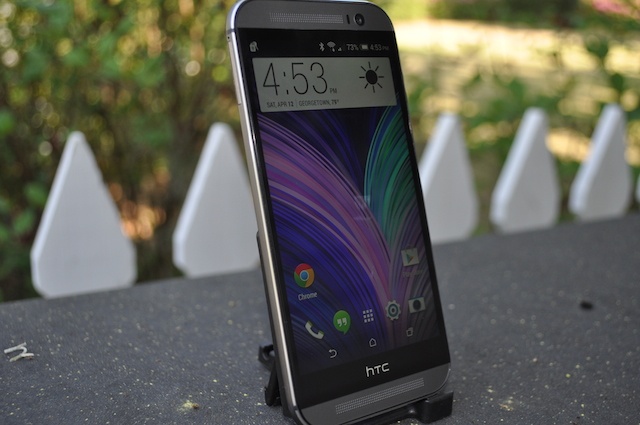 HTC has tweaked the software a bit to display colors better.  In direct sunlight or varying viewing angles, the screen looks phenomenal and HTC is also promoting their Advantage program, so in case it does fall out of your hand, they will replace the screen for free. Kudos HTC.

If your reading this review, I am sure you’ve seen some chart showing all kinds of specs, but what do they mean? It is a given, the new HTC One is packing one of the fastest processors available, the 2.3 Ghz Snapdragon 801 from Qualcomm along with 2GB of DDR2 RAM.

Now, we must remember that speed and memory do not completely define how fast a phone is.  It kind of like putting a Ferrari motor into a Volkswagon Van, it might have some serious raw horsepower, but horsepower doesn’t get it across the finish line.  This goes hand in hand with smartphones as well.  HTC has worked diligently on the software side to give the user a really fast phone that never hesitates.

The phone is available with 32GB onboard memory (T-Mobile) and if that isn’t enough it also has an expandable microSD slot for cards up to 128GB.  This was a big complaint to last year’s One, but I am glad HTC got the memo.  So load up all your music/movies/photos and never stream again!

HTC has boosted the capacity of the new HTC One battery to 2,600 mAh from 2,300 mAh in the year’s prior.  However, even though this might not sound like a big jump, HTC says that we can expect a 40% increase in battery life over its predecessor.  This boost in battery life is due to the Snapdragon 801 chip along with all those software optimizations, have made the device last for quite some time. 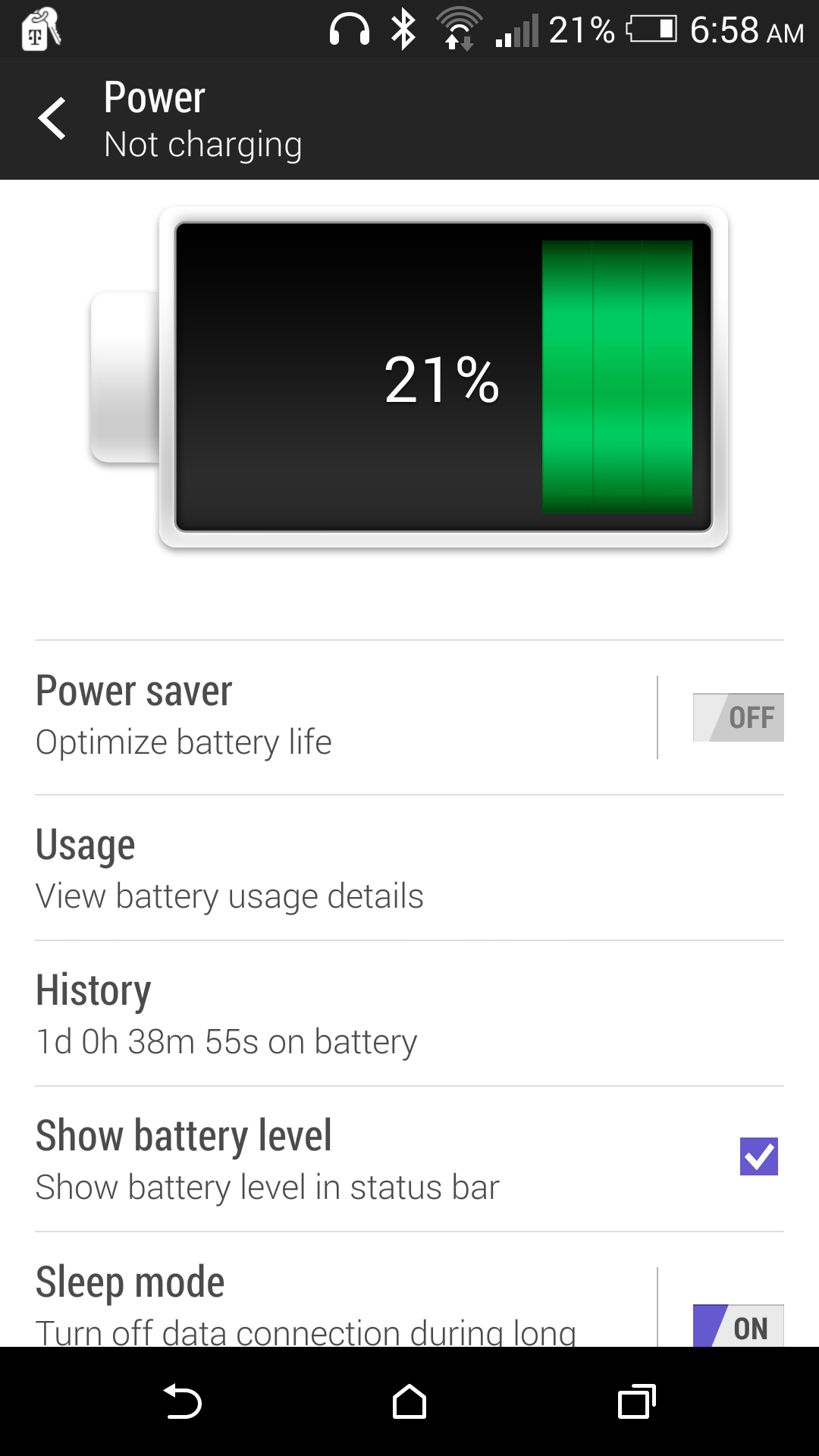 I put the battery through the ringer and I got very good results.  I tested the device as I would normally use it with my occasional YouTube video,taking pictures, and syncing with my FitBit.  Over the course of one day I still had about 35% battery life, which is awesome compared my previous devices, the Moto X and the Nexus 5, which would require a quick charge to make it through the day. 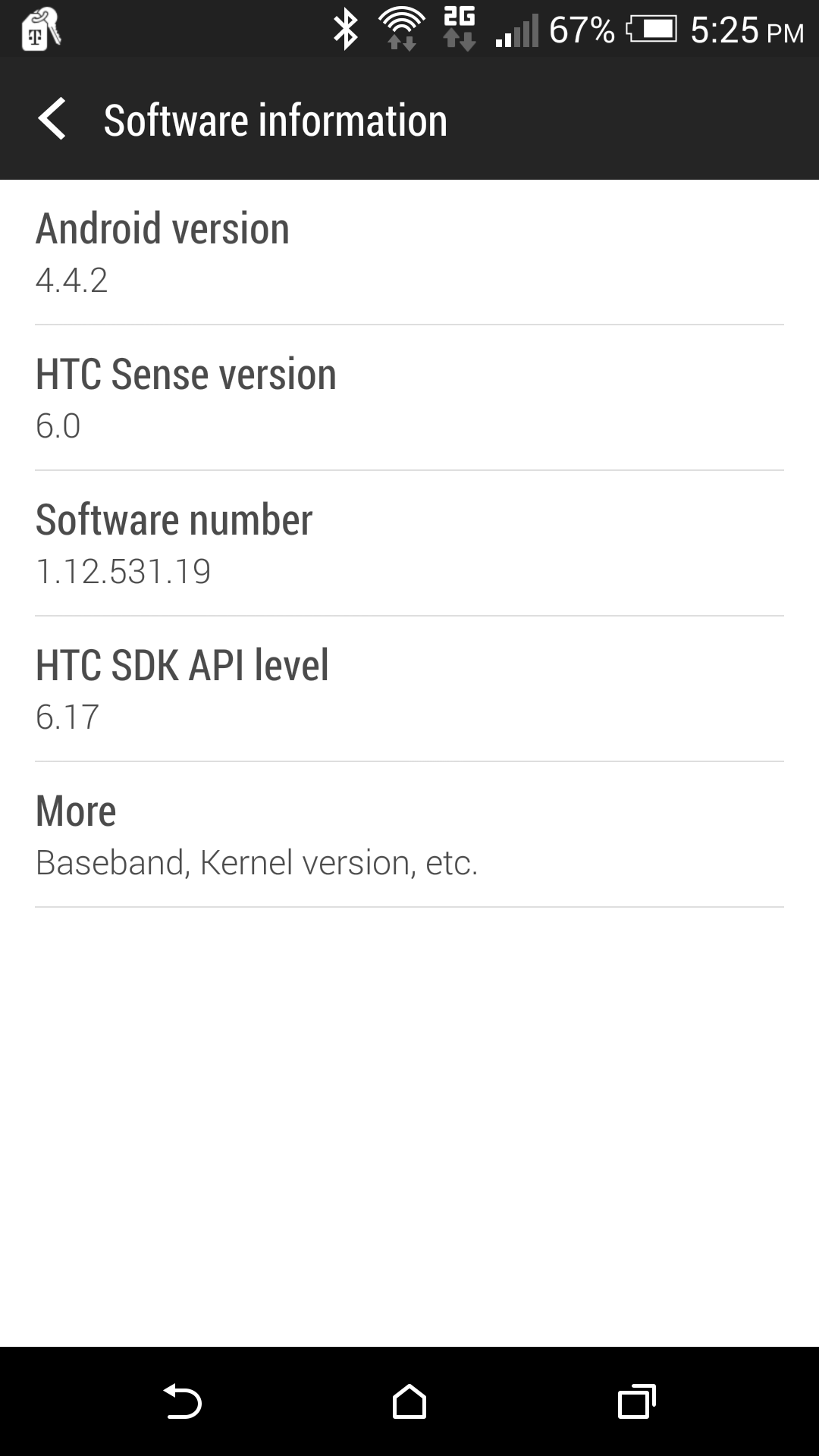 Well if you have never watched Star Wars, I am sorry, otherwise you’ll know what I’m talking about.  Out of the box, the new One is running with Android KitKat 4.4.2 along with HTC’s own custom interface, Sense 6.0.

Pretty much anything that can be changed, HTC has done it, gracefully though I might add.  From notification, app drawer, on-screen buttons, quick settings, lock screen, hell pretty much everything has the Sith flavoring, and it is better than ever.

The greatest enhances have come to BlinkFeed and the camera app, however life is all about the little things and HTC has made lots of little tweaks to make the interface more user friendly and clean.

The initial layout of the home screens are 3 standard tiles with BlinkFeed to the far left, which is removable.  With a simple pinch on the screen you can add more tiles, up to five including BlinkFeed, and customize them as you wish.  HTC has really done a nice job and even though I am a huge fan of third party launchers such as Nova or Google’s Home launcher, HTC’s is really nice and should not be written off.

In quick settings, you have 24 different settings you can manage with up to 12 available in the menu.  You can even edit out the ones you don’t want by tapping the pencil/rectangle thingy in the top right corner.

Motion Launch has become a big part of the Android experience which we have seen recently on the Moto X with its wrist flick camera action and the double tap on the LG G2, which wakes the phone up.  Well, HTC is joining this game as well, but they have taken it to a whole new level. Below are the 5 different actions you can do, while in portrait mode and holding the phone, to wake up in specific areas:

You also have the ability to get to the camera while the phone is asleep, just go into landscape mode (horizontal) and hold either the volume up or volume down button and voila, your Duo Camera is ready to snap away.  You can also set either of the volume buttons to act like a shutter instead of using an onscreen button, kinda of nice and convenient. 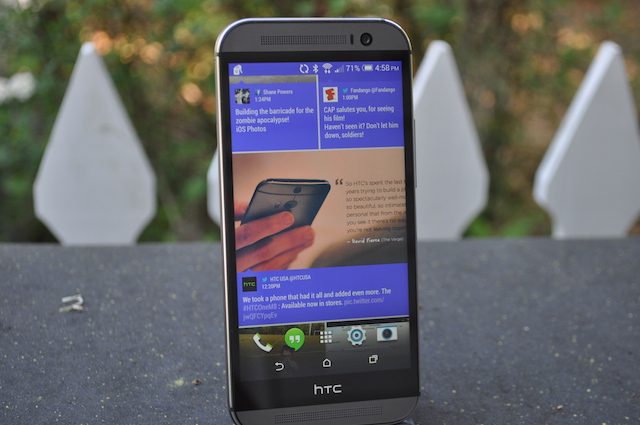 BlinkFeed is still alive and looking better than ever on the new HTC One.  Based upon what theme you have chosen for your phone, BlinkFeed takes on the same color scheme and a much cleaner look than before.  Now if you’ve never had the privilege of using BlinkFeed, you should definitely check it out.

BlinkFeed allows you to:

Personalize your own stream of online content in seconds, and stay updated in a glance. Swipe your home screen once for new Facebook posts, Twitter feeds, breaking news, sports scores, and a lot more. If you browse for it online, it’s on your HTC BlinkFeed. Only much easier to find.

Yeah, I stole the above from HTC’s website, but in a nutshell, BlinkFeed allows you to customize what you want to see without digging into all those apps.  Now it has its limitations, so if your a Twitter fiend (addict) or Facebook lover you won’t see all of what is happening in your social world, however you can get a quick glimpse.  HTC has over 10,000 partners you can choose from and a detailed list can be found here on their website.

BoomSound: So loud it hurts! 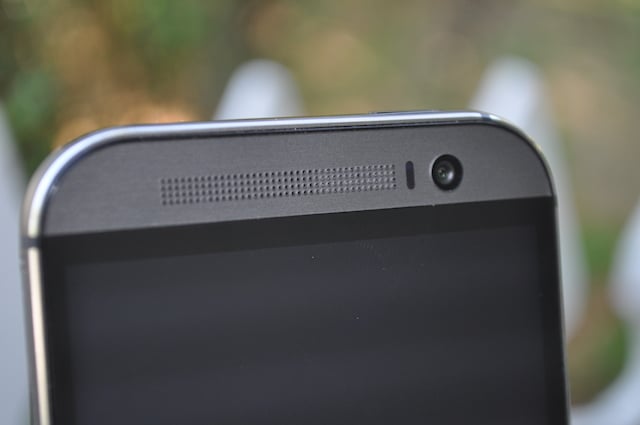 HTC has improved upon their already ready loud front facing speakers known as, BoomSound.  HTC says they are 25% louder and clearer as well. I always enjoyed last year’s One and this year’s is just getting better.  The only real downside to having BoomSound is that it does make the device larger, however it is a worthy trade off because of the crisp, loud, and clear sound you get from the speakers. 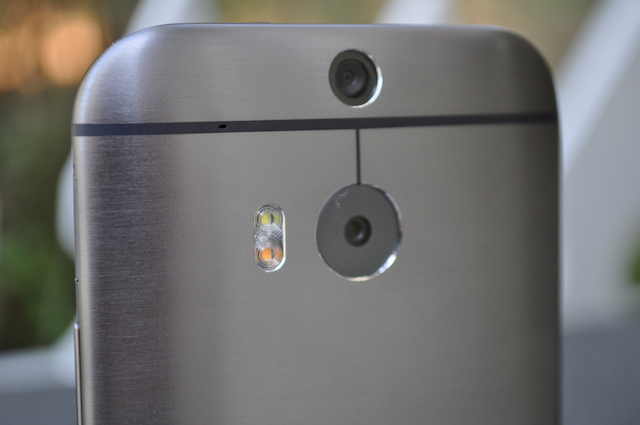 Last year’s HTC One was hyped up around the idea of the UltraPixel camera, which was great for low light, however for daily use it was not impressive.  Cameras have become a daily part of our lives with our smartphones and lots of people spend the money not just for a phone but a tool that connects them to the world.

This year with the new HTC One, HTC has made a valiant effort to fix some of these issues.  The camera works much better outdoors, however the zooming abilities are still rough compared to other flagship phones, which is probably due to its 4-megapixel resolution. 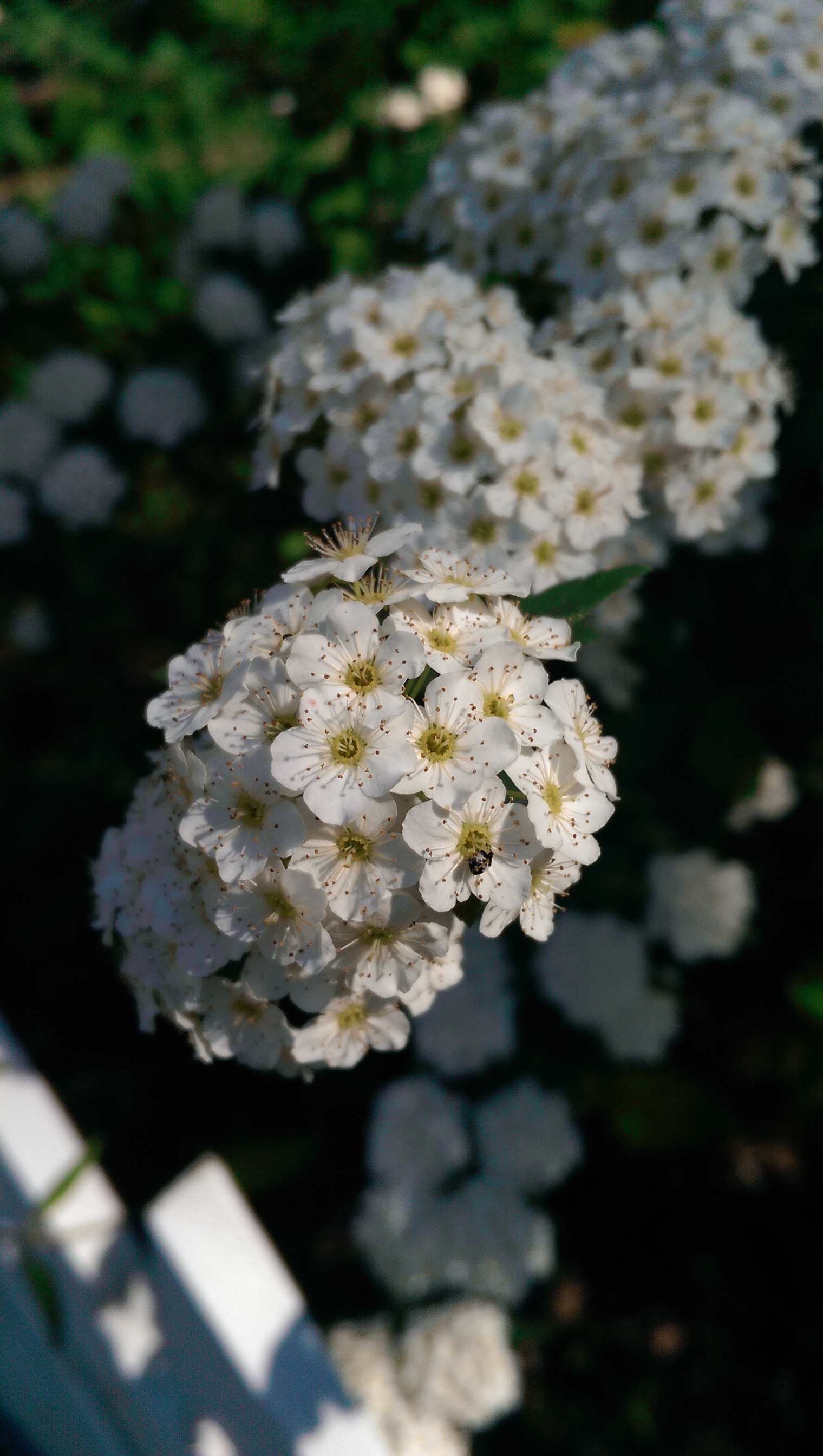 For me, this is not a deal breaker, because if I really need to take high quality pictures, my trusty, yet expensive, SLR will do just fine.  However, I am your average photo taker, but HTC has done a superb job on their new camera app which allows you to do a plethora of things such as selfies, dual capture (front and rear cameras at the same time), Pan 360 (HTC’s version of Photospheres), and Zoe camera.

There are so many different options available for the camera, but my favorite would be the new DuoCamera.  The rear cameras, yes plural as in 2, allows the main camera to capture the entire picture while the second camera captures depth information.  By having the two cameras, you can defocus the background to make your main objects stand out.  You can also implement many different filters to the picture in order to give it some really cool effects.

HTC is still lacking behind other smartphone makers in the camera department, but not by much! You can still produce beautiful images and have great effects on them! 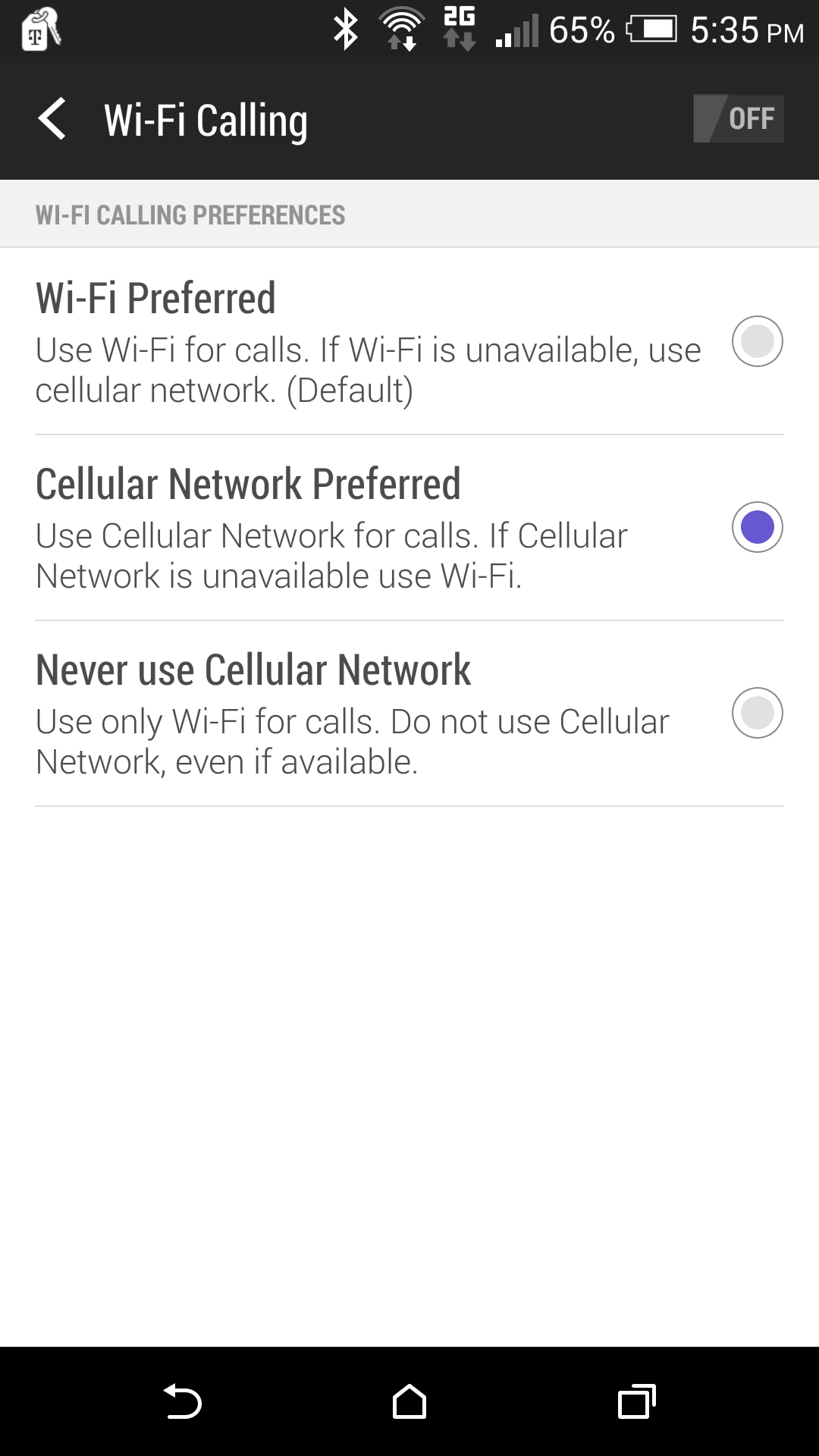 The great thing about T-Mobile is Wi-Fi calling.  Now, I know first hand that T-Mobile doesn’t have the greatest coverage, especially in buildings, but they make up for this with Wi-Fi calling, which has worked marvelously.

HTC is also offering developer and unlocked editions for $700 which is free of carrier bloatware and in the developer edition, it comes with an unlocked bootloader.  So you may tinker at your hearts desire.

HTC has had a rough few years trying to get its foot firmly planted into the smartphone market.  However, HTC has taken last year’s “Smartphone of the Year” and made it even better in every way imaginable.

From design, software, and battery life I have never had such a great phone experience until now.  The new One is much more than a phone it is a beautiful metal masterpiece that takes all the aspects of a phone and capitalizes on all of them.

I have truly had a great experience with the new HTC One and I believe that HTC has yet again seized the “Smartphone of the Year”.

Check out pictures and the unboxing of the new HTC One below!