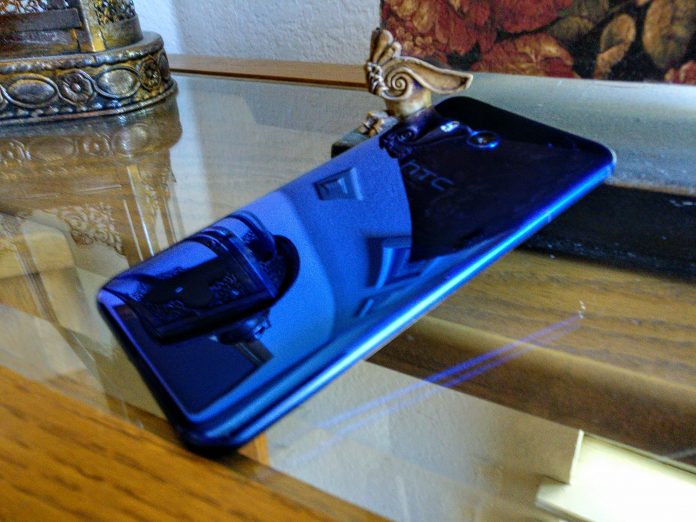 Post updated to reflect an update to the EdgeSense feature and to fix a few factual errors in the post – thanks to HTC for clarifying! 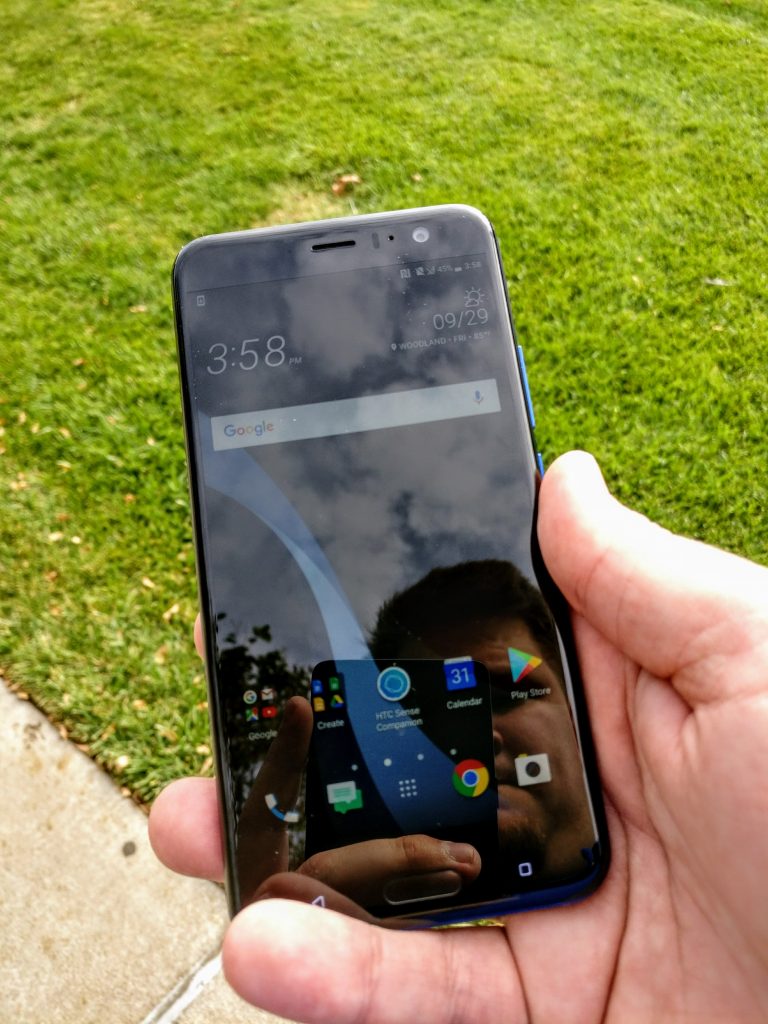 Perhaps the most distinguishing feature of a modern smartphone is the display – in a world of shrinking bezels and 6″ phablets, phone real estate is dominated by the display. As such, OEM’s are striving to find ways to use the display to separate their phones from the competition, often in the form of “innovations” in display technology. These gimmicks are legion: Infinity Screen. Super Retina. Second Screen. Dual Edge. And while these concepts are interesting and certainly striking in their own right, mostly they’re just design quirks and flashy terminology used to justify jacking up the price of a flagship phone.

What is important, however, is that you enjoy looking at – and interacting with – your device’s screen. And in that area, at least the HTC U11 excels. With a 5.5″, 1440×2560 Gorilla Glass 5 LCD display, the U11 offers a no-frills screen that nonetheless delivers crisp, vibrant picture quality. While the brightness leaves something to be desired (when your softkeys put out more light than your primary screen, you know there’s a problem), the resolution and color depth are really great. There are a couple quality-of-life tweaks included in the Display Settings, including both Nightmode (which can be configured manually or automatically at sundown) and Color Temperature (to manually tune the screen to your preference).

Of the U11’s set of features, its display is likely it’s strongest.  If only the rest of the phone was as impressive. 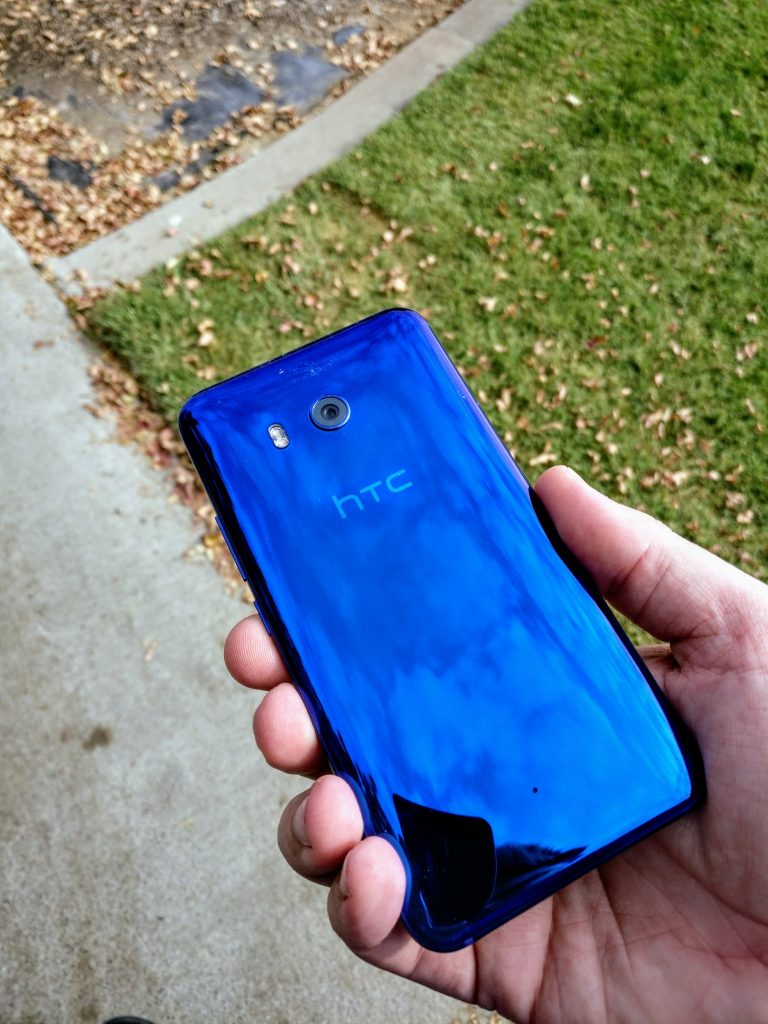 I’ve always been a fan of HTC’s hardware. My first two Android phones (MyTouch 3G, T-Mobile G2) were both HTC-made, and I have fonder memories of those devices than any since. HTC always seemed to have a cleaner, more utilitarian design to its phones, where Samsung and LG always tended toward the more flashy.

And while the U11 has its flaws and gimmicks, that approach remains consistent. It feels solid in-hand, with buttons that are within easy reach that press with a satisfying click. The front-mounted fingerprint scanner is responsive and error-tolerant, allowing you to unlock it from a variety of angles. The phone is rated at IP67, making it dustproof and waterproof up to 3′ – personally, I feel in today’s market this should be the industry standard.

Where the U11 falters, though, is the chassis. The aluminum frame is nice, and the phone feels durable enough, but the chromed, electric blue backplate is an true eyesore in my opinion. Other blogs have commented on the design, calling it a “stunning effect.” This is what the back is supposed to be, according to HTC:

But all I see is a hideous, fingerprint attracting, plastic-feeling back that reminds me of the early ’00s, when chrome spinners on pickups were all the rage. It’s certainly distinctive, but then again, so are hot pink legwarmers. It’s striking, but it’s more akin to being punched in the face. Phones lately have been trending toward laser-cut, aluminum unibody exteriors, but HTC appears content to rock a glass back, slap a coat of chrome on it, and call it unique. I suppose, despite the criticism, it should be noted that in addition to the blue, it also comes in red, black, and what can only be described as “powder.”

The U11 also features EdgeSense, the ability to squeeze the sides of the frame and have it be detected as an input. At launch, this could be configured to open an application and perform a variety of functions like take a screenshot, toggle the flashlight, activate a voice assistant, and to take pictures. A September update expanded the feature tremendously, adding the ability to perform essentially any tap function within any app, on a per-app basis. 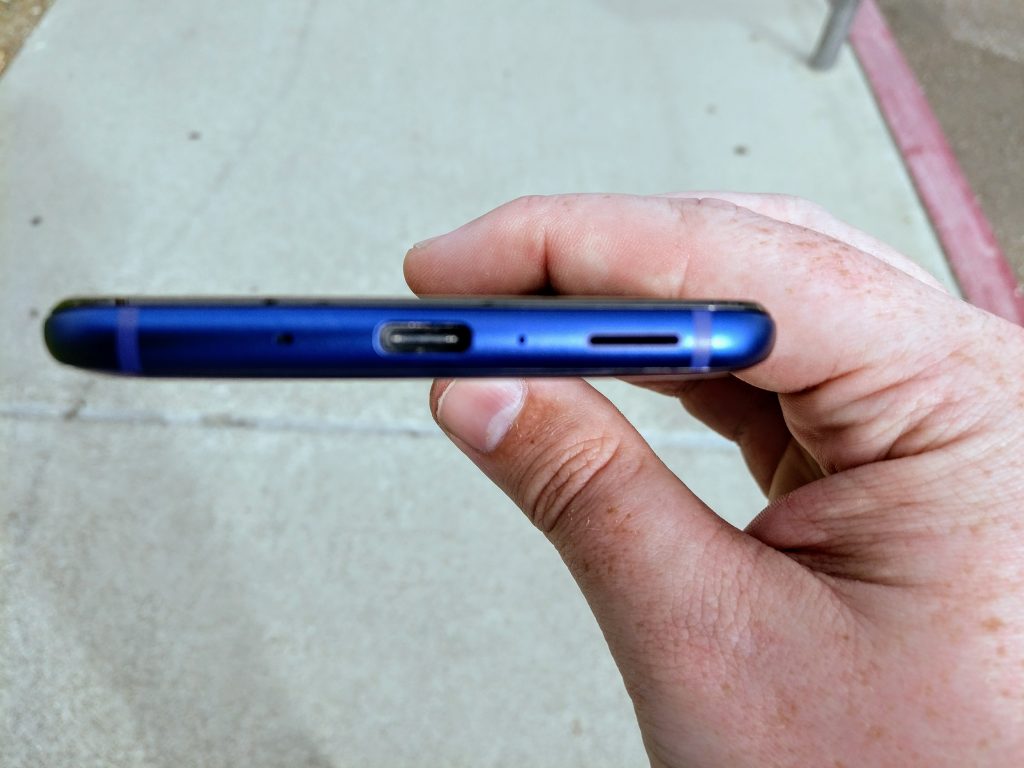 By and large, the internal are about what you’d expect from a higher-end these days. At its core is a Qualcomm Snapdragon 835, an octa-core processor that’s pretty common among flagships recently. The base model sports 4/64GB RAM/ROM – fairly standard – while the upgraded model has 6/128 – much less common. Both models have a MicroSD slot for expandable storage, so you should never run short.

Its connectivity standards are all top-of-the-line, or close to it: NFC, 802.11ac WiFi, Bluetooth 4.2, and a USB-C 3.1 port. Sound-wise, the U11 sports something called USonic, which, er…well, I’ll just let HTC tell you:

Immerse yourself in purer audio. HTC U11 introduces the latest version of HTC USonic, which now combines active noise cancellation with the ability to tune audio to your unique hearing. Other headsets focus more on obtaining great sound quality while overlooking the fundamentals – each of our hearing structures are different. Our USonic earbuds map your inner ear with an advanced sonar-like technology and then adapt the sound profile to your unique biology. This creates an incredibly personal and optimized listening experience with vibrant audio shaped specifically for you.

In practice, I didn’t notice all that much difference from other quality wired headsets, though it does seem to be quite an upgrade over the crap that’s usually thrown into phone boxes. While all of this combines to be a very solid set of features, there’s also nothing that truly stands out and sets it apart from other flagships, or even second-tier phones.

Since it doesn’t quite fit into any other category in this review, I’ll slip a rant on EdgeSense in right here. The ability to squeeze your phone and have it perform a function is no different or unique than placing a dedicated shutter button on the side of the phone, or adding a fourth button on the on-screen Nav Bar. It’s just another button, concealed in the frame of the phone.

That being said, it is a rather sensitive button, with some truly innovative software backing it. The newest update of EdgeSense allows you to configure a near-infinite number of commands for the function, replacing a tap on the screen with a squeeze (or long squeeze) of the sides of the phone. What started as a simple function became something rather impressively customizable with the September update.

I prefer that dedicated, two-stage shutter button, personally – but if you spend the time to configure some custom actions with EdgeSense, I think you’ll love it.

Call me picky, but I won’t even consider a phone that has less than a 3000mAh battery these days. As hungry and powerful as phones are getting, anything less is not worth buying. Luckily for the U11, it just made the cut. I won’t tell you the battery life is great, because it isn’t. It’s adequate, and it might get you through a day if you’re judicious with your usage, but what fun is that? Life is stressful enough without having anxiety over the battery life of an inanimate object that is, nonetheless, our gateway to socialization in the modern world. With smaller companies like Blu and Oukitel bringing phones to market with 5000 and 10000 mAh batteries, it’s time bigger OEMs got the hint.

I’ll be frank – for as much as I’ve criticized the U11 thus far, it takes beautiful, beautiful photos. It doesn’t feature the dual-sensor rear camera setup that’s currently en vogue, but the single sensor it does have is really impressive. I took a few casual, real-world style shots on my way into the airport, and I was really satisfied with the level of detail and the color quality in each shot – even on the move. Even in the extreme-zoom photo of the (super creepy) bird art pieces outside the parking structure, the pictures are in focus and at passable resolution. Even in low-light conditions the camera performs admirably – I have to say, it’s probably the best camera I’ve personally tested.

That praise out of the way, I’m a little concerned with the way the camera performance is being marketed. HTC has used the phrase “The #1 smartphone camera on the market” in reference to the HTC U11, but with a DXOMark of 90 (certainly no slouch!), it ranks as the fifth-best camera (tied with the original Pixel) on the market. It was #1 for the first four months of its existence, but is falling down the charts. Unfortunately, HTC’s U11 page still lists it as the best smartphone camera on the market.  It’s a small thing, perhaps, but lends credence to the growing idea that the concept of Truth is kind of….flexible, these days.

In a vacuum, HTC’s U11 is a perfectly adequate phone. But context matters, and the price of that adequacy needs to be considered. A $650 (or if you’re lucky, $549 on sale) phone with this set of specifications is tough to justify in a world where OnePlus’ 5 – or even 3T (from a year ago) – can be had for less with comparable specs. For all the praise it got around the web, frankly, I expected better. In the end, the HTC U11 is another adequate “flagship” with gimmicky (if, admittedly, intriguing) features and the steep price tag we’ve come to expect from the big name OEMs. If you’re a big camera buff, you might be able to justify the price in your own head – it’s a ridiculously well-performing device in that regard – but for people that don’t put a premium on camera performance, there’s better devices out there for cheaper.

The HTC U11 is now available on all major US carriers (or unlocked), starting at $649 – if you just really, really dig that chrome back and gotta have it, I suppose. It should be noted that as of this publishing, the 64GB unlocked version is on sale for $549, and the 128GB unlocked version is $629 – much better values.