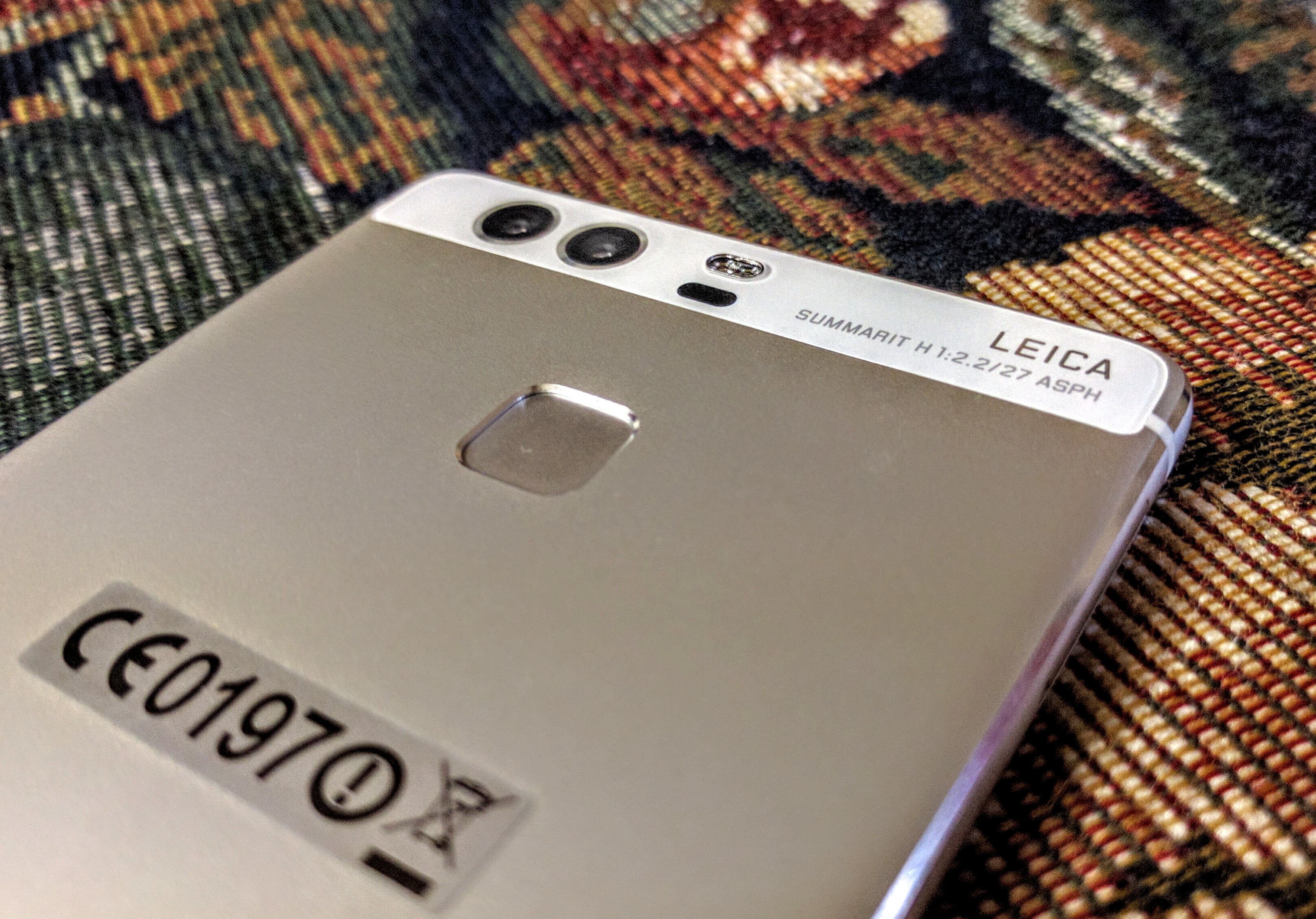 Since I own and use a Huawei Nexus 6P as my daily driver, I find myself in the unique position of being able to compare these two phones – one crafted with direct input from Google, and one the result of Huawei when left to its own means – side by side. Many of my observations in this piece will be comparisons between the two, despite the piece as a whole being a review of the Huawei P9, specifically.

The aluminum frame feels great in the hand. It’s got a slim profile and weighs next to nothing – a stark contrast to the Nexus 6P, which is bigger and noticeably heftier in-hand. Oddly, the P9 is only 0.3mm thinner than the 6P, but feels much smaller – perhaps because the 6P is 38 grams heavier. The P9 is so light, in fact, that when it slipped out of my pocket when I sat down and embedded itself in the couch cushion, I never noticed until I went to check it.

The downside to that all-aluminum body is that when the phone gets hot, it gets hot. A video call with my sister for a mere 15 minutes made the thing nigh-unholdable (that is not a word), lest I burn the fingerprints from the tips of my fingers.

Time to acknowledge the elephant in the room – the P9 looks just like an iPhone. From the shape, to the dimensions, to the random Torx screws on the bottom of the phone, it reeks of Apple design. I understand that people think Apple is the pinnacle of build quality, but ripping Apple’s aesthetic while using Google’s operating system seems so very wrong on so many levels.

Aside from looking like an iPhone, the rest of the phone is structured like a Nexus 6P – volume buttons and power button on the right side of the frame, fingerprint sensor on the back, Type-C USB on the bottom (although the headphone jack is on the bottom as well, not the top). 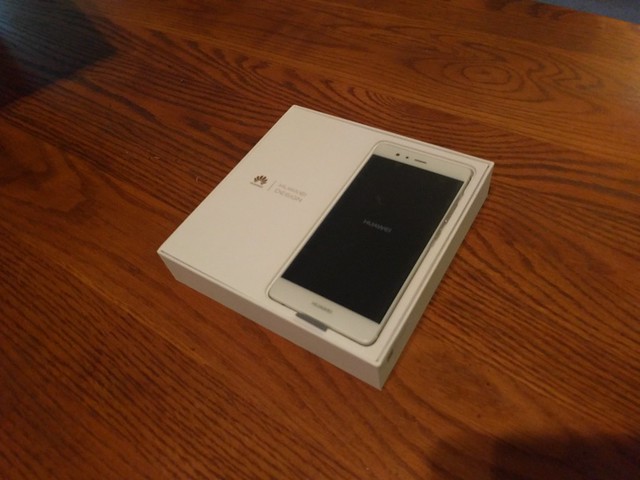 Quantitatively, the Nexus 6P is a superior screen – 0.5″ bigger on the diagonal (5.7″ AMOLED), a higher pixel density, and an oil resistant coating on top of corning Gorilla Glass 4 all work in the 6P’s favor. In practice, though I’ve found the P9’s display (5.2″ IPS LCD) to be equal or better in nearly every way.

The pixel density difference is not immediately obvious to the eye, and the supposed oleophobic coating on the 6P didn’t prevent it from picking up fingerprints at the same prodigious rate as the P9. The latter’s display is every bit as gorgeous as the former’s, despite the 6P’s AMOLED screen. In certain side-by-side instances, the colors on the P9 are even more vibrant. Either way, the P9’s screen is pretty damn good. I took a side-by-side shot of the two screens to show the difference – presented without comment. 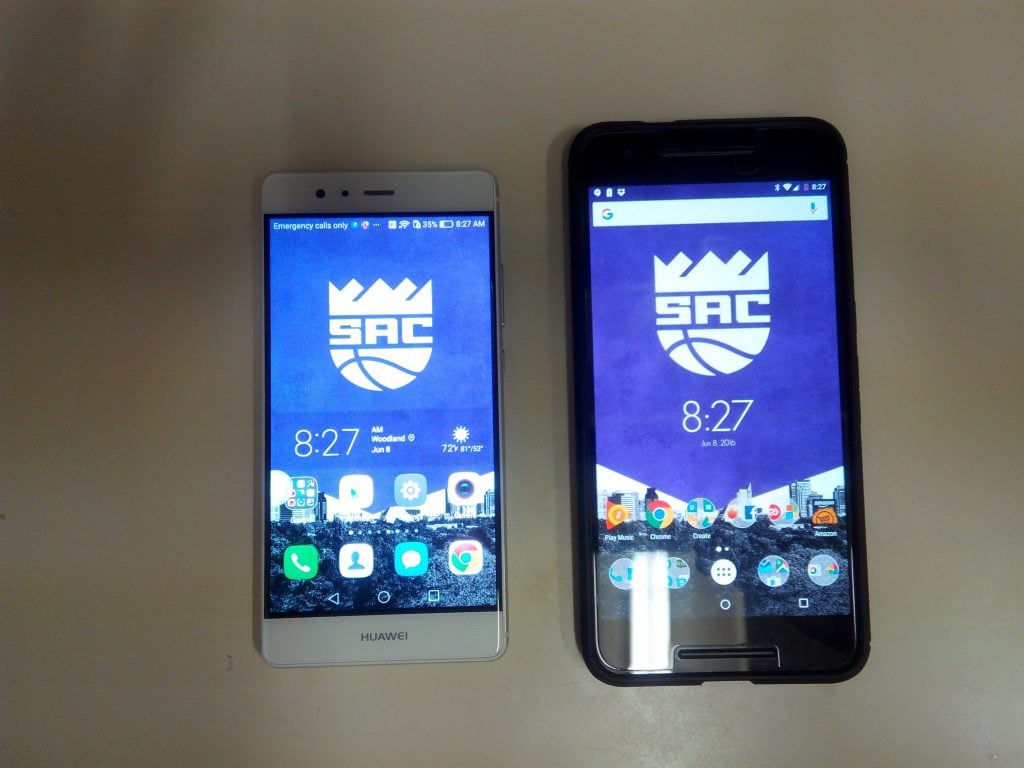 I’m gonna do this quick; like a bandaid, just tear it off – the P9’s camera blows the 6P out of the water. Badly. In all of my (amateur, highly unscientific and purely subjective) head-to-head comparisons, I preferred the P9 – both in terms of how easy it was to get the desired shot, and how the shot looked on its screen and on my computer. I’ve uploaded a gallery of images taken with the two phones for your perusal. 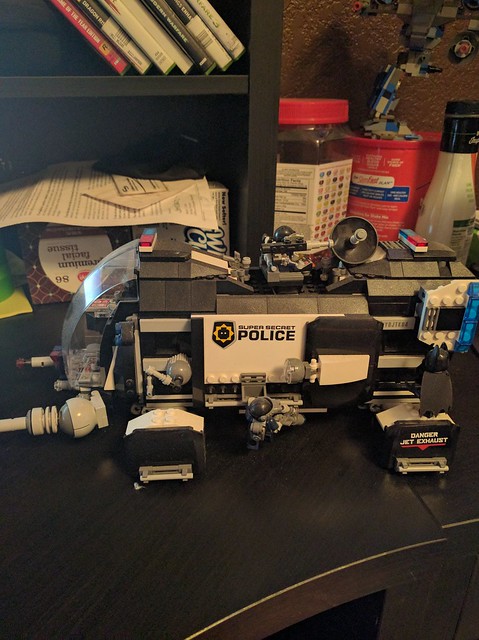 This software also features a pretty nifty feature that turns off the camera if you leave it open for too long without doing anything with it – this would undoubtedly save some accidental battery loss.

The focus of the P9 is far superior to the 6P’s, making taking close-up shots way easier to capture; take a look at the Lego closeup and the closeup of the gaming miniature to see what I’m talking about. Additionally, the shutter speed on the P9 seemed a lot snappier than the 6P, which was sluggish by comparison.

In terms of front facing cameras, the P9’s really picks up insane amounts of detail – to the point where I saw my own selfie and thought “ugh, dat skin tho.” In short, the P9’s selfie cam is straight up better. I video chatted a few times with the P9 as well to get a feel for if the quality was any better on the receiving end, but my partner in crime for those calls didn’t seem to notice a difference.

In terms of battery, the P9 performs about how you’d expect with a 3000mAH battery; I got less than a day of my usage, which is to say about 3 hours of screen on time streaming music, refreshing Twitter like mad and texting like crazy. For comparison, my Nexus 6P manages about 4 hours of screen-on time before I need to charge it. The P9 doesn’t quite have the same lasting power, but it’s also no chump. With some battery saving considerations, there’s no reason the battery couldn’t last most people until bed time.

The P9 does not support the 6P’s 3A charging speeds, but the smaller battery and Type-C USB port mean it still charges pretty quickly compared to other devices.

It’s important to note that the P9 does not support CDMA bands, only GSM – which means Sprint and Verizon customers are out of luck in the US (note that it does support HSPA and LTE, however). My reception with my T-Mobile nano SIM was pretty flawless, with no connection drops and very good quality calls.

WiFi performed as expected – in my case, lots of drops and lag, because the internet in my neck of the woods is awful, and I need to yell at the AT&T guy again. At Starbucks, however, the WiFi was just fine.

The fingerprint reader is arguably faster than the Nexus 6P’s, but I feel like the 6P’s registers my finger correctly more often – note that this may be because of the way I set up my fingerprint on the two devices, which has a margin of human error.

The speaker placement on the P9 isn’t ideal, especially in comparison to the front-facing dual speakers of the Nexus 6P. Holding the phone one-handed in my typical left-handed grip – index finger bracing the left side, middle finger supporting the back, pinky under the bottom of the frame – actually blocks the speaker, muffling the volume. When unimpeded by fat fingers, the volume can compete with the best of them, but the overall sound quality seems a bit hollow to me.

Long story, short: if you like iOS’s launcher, or MIUI, this phone is for you. It eschews Google’s signature app drawer in favor of spreading each and every single icon of each and every single app you install on your homescreen. This, to me, results in way too many icons – especially if you start adding widgets.There are a number of cute options within the launcher: transition animations, auto-align icons, shake to align, and homescreen looping are among them.

In terms of performance, I ran into a number of jitters and hesitations when running around in the menus, but to its credit the P9 ran Android 6.0 admirably, and didn’t lag a whole lot; buttery smooth, for the most part. One area the P9 does struggle with, though, is the keyboard – I ran into a bunch of occasions where it would hesitate to input my keystrokes, resulting in many, many backtracks.

I had a really great time with this phone. It often felt as good, if not occasionally superior, to my Nexus 6P, especially in terms of how it felt in the hand. The launcher – and, indeed, Huawei’s modified OS in general – was not my bag, for I’m an AndroidGuy (I’m ashamed of that plug), not an Apple Guy.

Storage: Up to 128gb (nonexpandable)