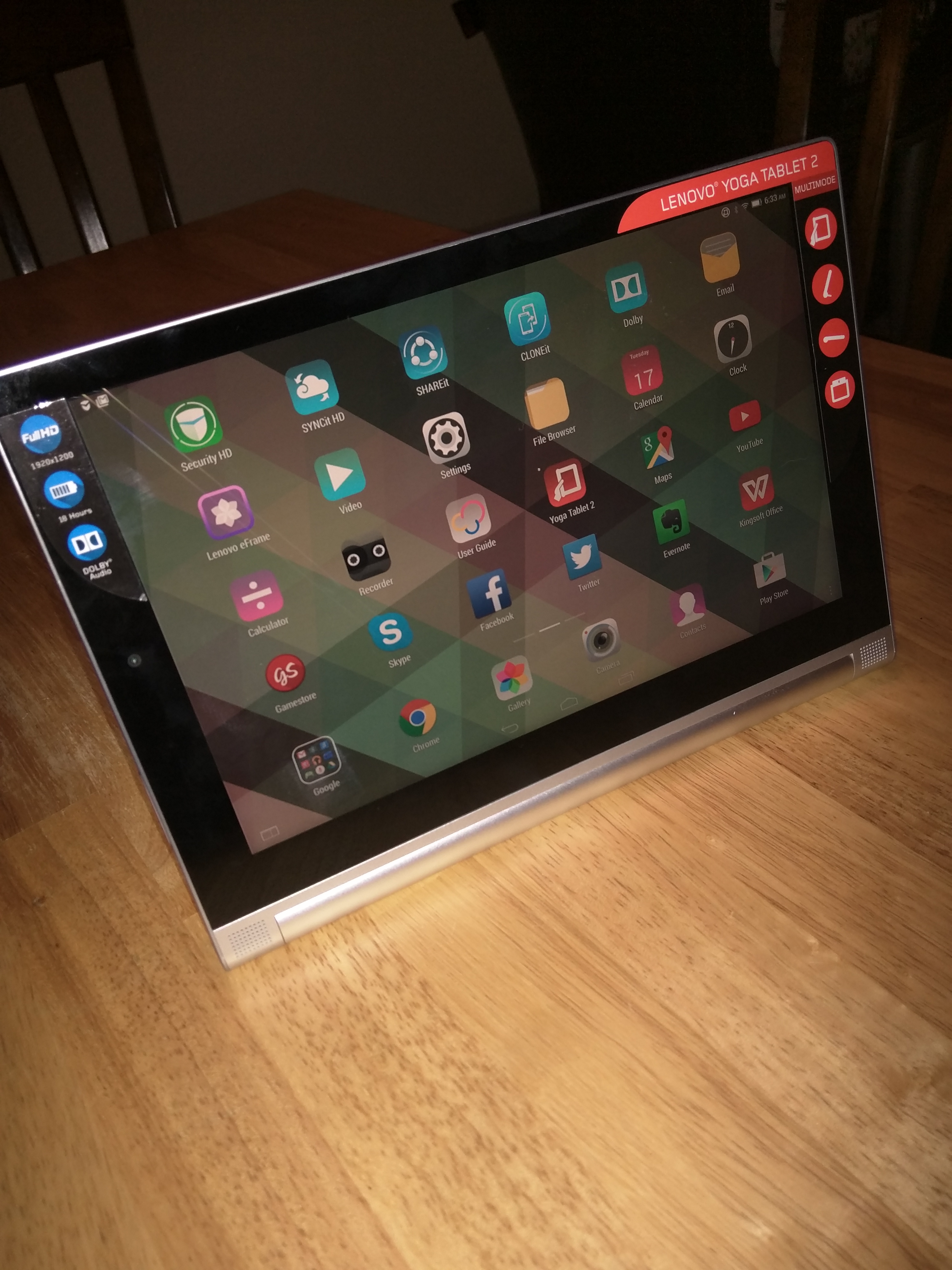 Lenovo’s newest tablet is finally here and is very much a tablet we’ve seen before. Every year Lenovo takes its tablet and gives it some incremental upgrades that help improve the experience and this year’s edition is no different.

The last tablet that I reviewed from Lenovo was the Yoga Tablet 10 HD+. Throughout this review I’ll be referencing the previous a bit, so if you want to check it out, you can view it here.

The Yoga Tablet 2 looks like just its predecessors. The only real visual difference is that now there is no longer a Lenovo logo on the bezel. I don’t recall prior versions having this, but there’s a grippy plastic piece on the back, which while plastic, makes it a bit easier to hold and grip the device. The volume rocker was moved to the other side of the device, now above the power button and the port for the USB cable.

In terms of other changes to the hardware, the biggest changes include the screen, the processor and a new feature with the kickstand. Starting with the display, while the Yoga Tablet had an HD screen with a 1280 x 800 resolution, Lenovo upped its game this year with a 1920 x 1200 resolution display. Just to note, the HD+ that we reviewed in July had a display with a1920×1080 resolution, so the HD plus bests that tablet as well. The colors on the display seem more true and it has much better viewing angles than the previous models. Moving on to the processor, the Yoga Tablet sported a MediaTek quad-core processor then the 10HD+ a Qualcomm Snapdragon 400 processor. The new tablet has a quad-core Intel Atom Processor Z3745 (2M Cache, up to 1.86 GHz), featuring Intel Burst technology that dynamically matches processing power depending on what you are doing to maximize battery life. Even with the new display and processor, the tablet still has excellent battery life. Lenovo claims you can get 18 hours of battery life, but if using at 40% screen brightness and using Wi-Fi, you should get almost 13 hours out of it. Overall, the tablet is very snappy and has handled all the games that I’ve tried with it with no real issues such as Modern Combat 5, Hearthstone, Goat Simulator and Star Wars Knights of the Old Republic. As I mentioned earlier, the tablet has a new mode with its kickstand. While previously you could either use it in stand, hold or tilt modes, now you can use it in “hang” mode, basically rotating the stand until it’s flat and then there’s a hole in it so that you can hang it anywhere such as in your kitchen, bedroom , office, etc.I’d just be sure to use a hook that is securely in the wall before hanging, you don’t want to break you brand new $300 tablet.

A few other highlights of the hardware upgrades is an improved rear-facing camera, now up to 8 megapixels from 5 megapixels, larger front-facing chamber speakers with Dolby Audio surround sound and Wolfson Master Hi-Fi audio processing. I forgot to mention but it also has 2 GB of DDR3 RAM as well as 16 GB of built-in storage that is expandable, supporting MicroSD cards up to 64 GB.

Moving on to the software, the Yoga Tablet 2 is running Android 4.4.2 KitKat, just like the 10 HD+ was and has a slightly different version of the Lenovo LauncherHD.

The launcher still doesn’t have an app drawer, so it has an iOS feel to it, but I think this is Lenovo’s way of trying to make the UI their own and simplify the experience. If you read my last review, you may remember that I mentioned a Smart Side Bar that could be accessed by swiping from the bezel onto the screen on either side. This side bar gave you quick access to your videos, photos and books, recently used apps and sound and visual modes. It is now nowhere to be found. The closest thing to it in the software is called the “Bottom Switch.” This can be accessed with a swipe upwards from the bottom and it gives users the ability to quickly turn various functions on or off as well as access to advanced settings. You can also access Lenovo Smart Switch to change different display and audio modes, as well as access the camera, take a screen shot and and lock your screen. Although it doesn’t give you quick access to your movies, photos and books like the previous iteration had, I think it that it has to and this actually is a nice experience. It seemed like previously it was trying to do too much and you no longer have that.

Aside from these changes, there is really nothing else different about the software. You can still run apps in multiple windows and the way to close apps is reminiscent of MIUI, also telling you the amount of available memory.

I still think that the Yoga Tablet 2 is a good choice for the general consumer. It may not be a powerhouse like the NVIDA Shield Tablet or the Nexus 9, but it’s not trying to be. The Yoga 2 excels where it always has and that’s offering a great user experience, a unique design and a decent price tag. I think that the kickstand adds a lot of it since you don’t need a case to stand it up to watch a movie or tv show or to prop it up on your lap to type. If you wanted to have it hanging on your wall, you could possibly make it like an interactive calendar or an easily accessible computer in the kitchen to play music while cooking or to display recipes.