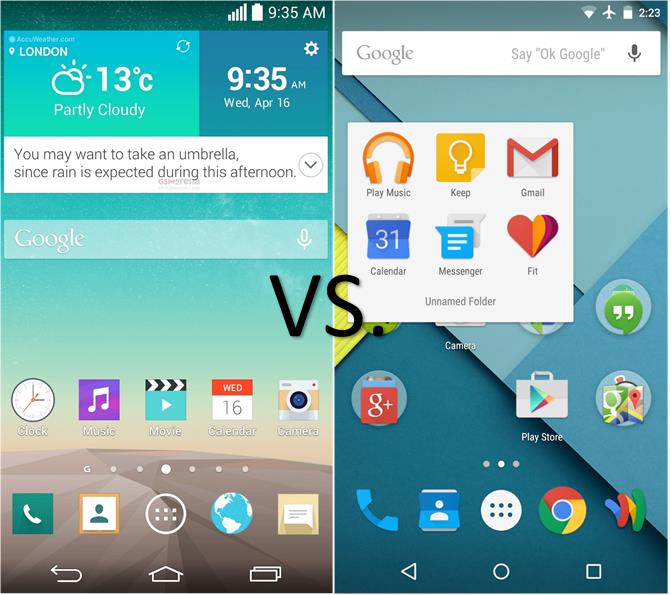 When I received my first Android smartphone about six years ago, I remember how much I desired stock Android on my HTC Droid Eris. I badly wanted to root my device, but as a young teenager at the time, I thought it would have been better to not risk bricking a phone I wasn’t paying for.

Fast forward to today, and now I’m on my fourth phone, an LG G3. If there is one thing I got the device for, it was the RAM. My last phone, with its 1GB of memory, just got so painfully slow that I couldn’t stand using it after it had been powered on for a few hours. It couldn’t even playback music without it hiccuping constantly.

Of course, this phone could end up the same. I’ve barely owned it for a month, which is not nearly enough time to measure its stamina.

Anyway, I knew right away that I might be dealing with a lackluster skin in the Optimus UI when I bought the G3. I recalled reviews of LG’s previous devices circa 2011 to 2013 where its skin was criticized time after time. Regardless, I just wanted the power the device offered, and at $30 on Verizon at the time, I felt it was calling my name. I’ll just put a launcher on it, I thought.

While it is true that I did put a launcher on it (Google’s Now launcher to be exact, which makes the home screen like the current version of Android), I’d be lying if I said LG’s skin didn’t make improvements on this pseudo-UI of Lollipop and that I didn’t enjoy the interface as a whole.

Before I go on, I should be clear that that my statements of stock Android are based partially on the Google Now Launcher since my phone still has KitKat. Likewise, my descriptions of Optimus UI are based on Android 4.4.

With the Now Launcher, a Google Search widget is located at the top of the screen. For better or worse, it cannot be moved around or removed from the display. I rarely use it, but I do like its minimalist appearance.

Speaking of minimalism, the Now Launcher starts the user off with two home screens, one of which is reserved for Google Now. There’s nothing inherently wrong with this, although I find it surprising that I can’t add a blank home screen manually. In order to add another, there has to be at least one app or widget on it, and if you remove them, the screen deletes itself. I don’t use many displays (Typically, just three), but this seemed a little cramped to me especially with its use of non-re-sizable, large icons. 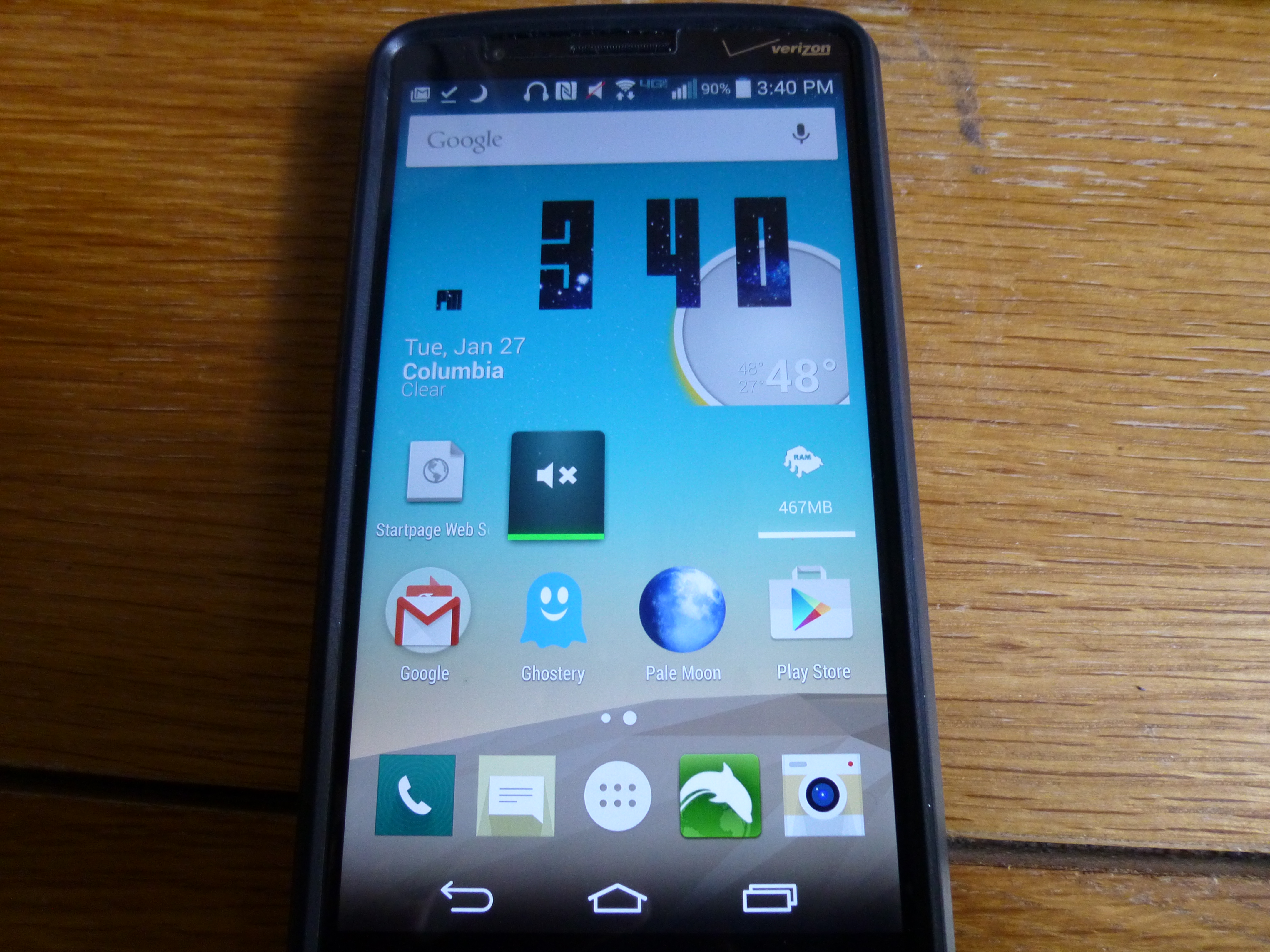 By the way, LG allows for easy customization of icons by long pressing them until a smaller icon of a paintbrush in the top right appears and tapping them once more in order to enter a menu to resize it or change its appearance. Some will immediately like this idea because while LG’s icons for its apps aren’t ugly in my eyes, the company has used some rather bland colors like for messaging. I can easily see people preferring Material Design’s vivid color palette. 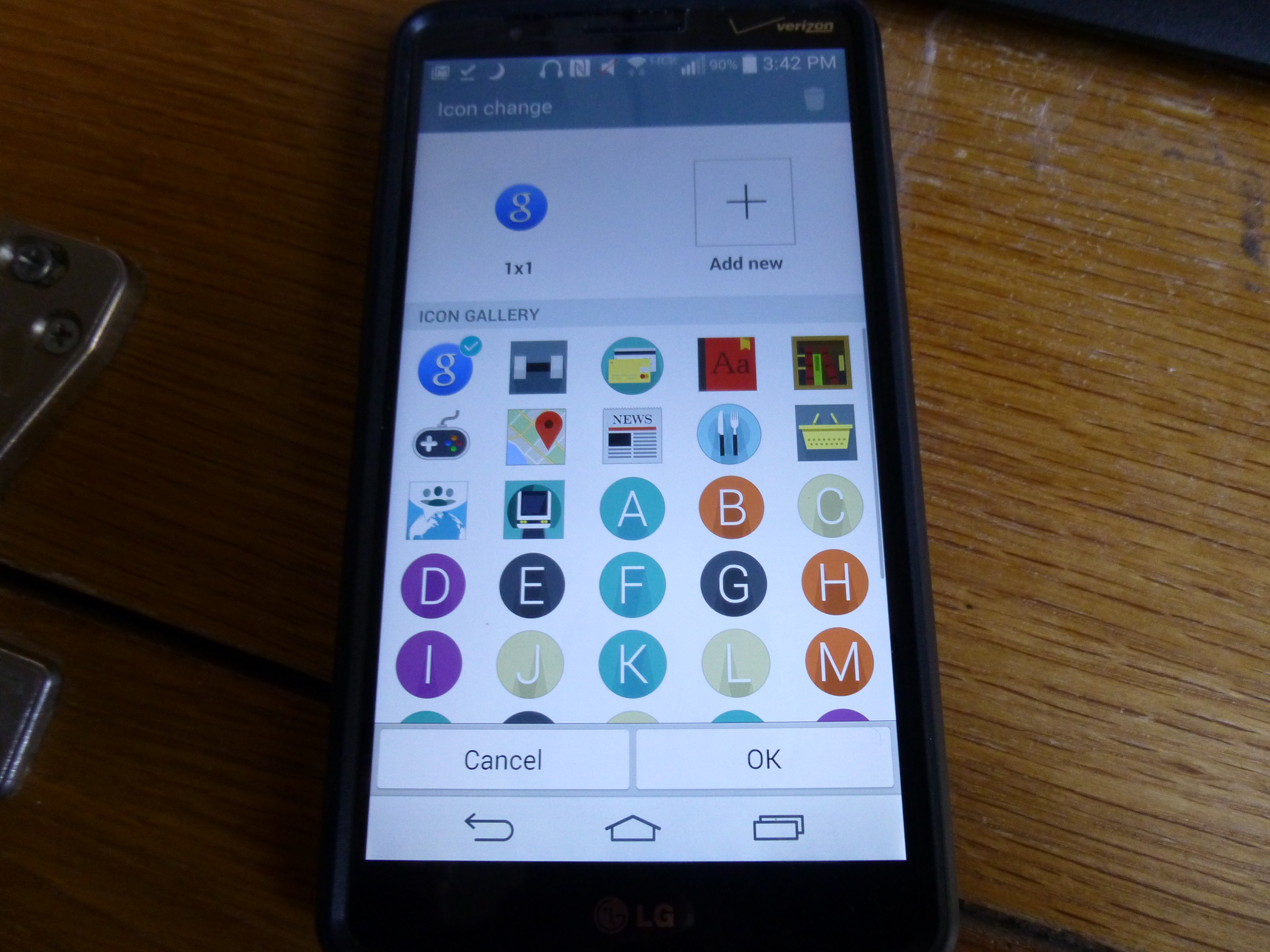 Next, there is the app drawer, which has apps sorted in alphabetical order on an opaque, white background. At first, I found this a bit jarring coming from LG’s UI since that allows the user to group apps into folders and to access widgets. The only way to do that with the Now Launcher (and probably with a stock ROM I’m assuming) is to long press an empty area of the home screen and select the widgets option above the home button. Of course, that becomes more difficult with a screen filled with apps. 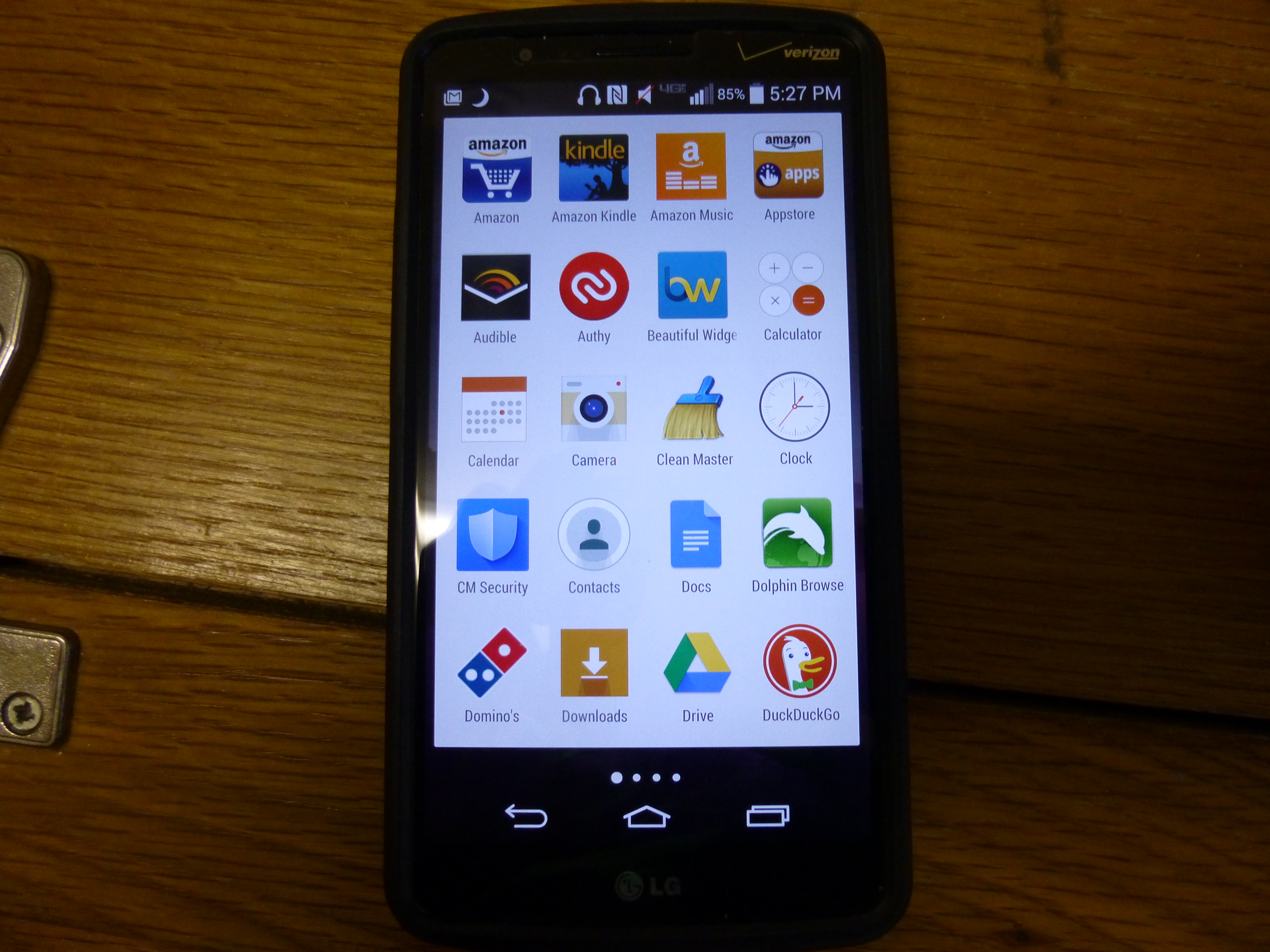 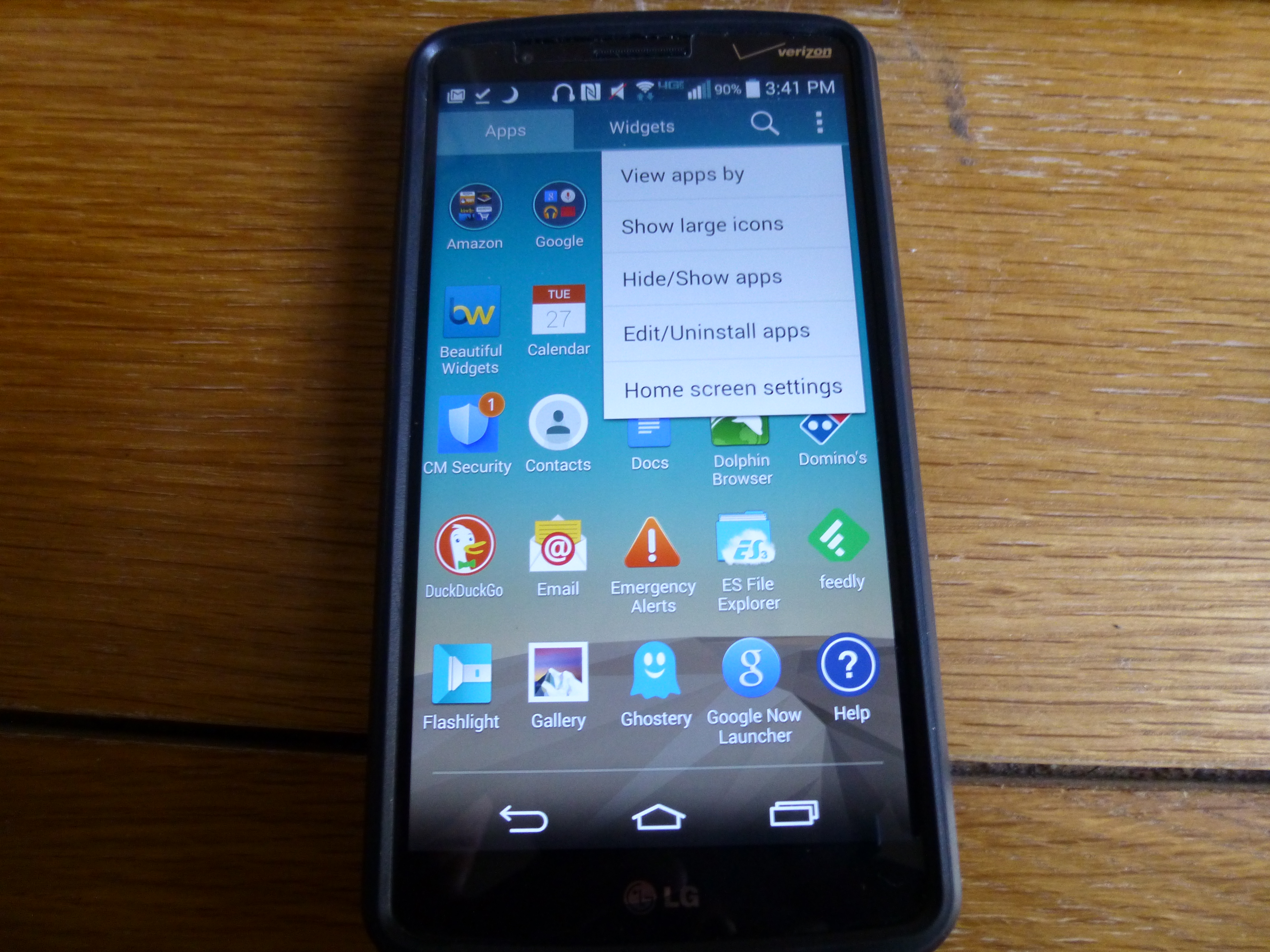 Based on what I’ve seen on notifications in Lollipop, I’d say Google’s vision is superior. On the G3’s lock screen, I can see indicators for missed phone calls and text messages but not for emails. In addition, I can’t see a preview of those messages as I could if I was using vanilla Android (Google gives an option to hide those previews as well). Filtering notifications for just the important ones through Priority mode also sounds like a plus to me as is turning off an app’s notifications entirely. 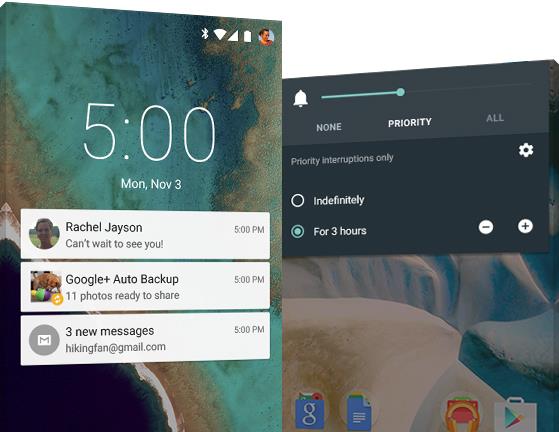 Nonetheless, I still do enjoy LG’s use of the panel. At the top, I can activate toggles for Wi-Fi, Data, Bluetooth, and so on (which can easily be moved around), change the screen brightness (and even turn on or off auto brightness), and control the volume.

I do see how this would be annoying for someone who receives a lot of notifications because almost half of the screen is taken up by these toggles. My Gmail and just one other notification can be seen before I have to start scrolling. 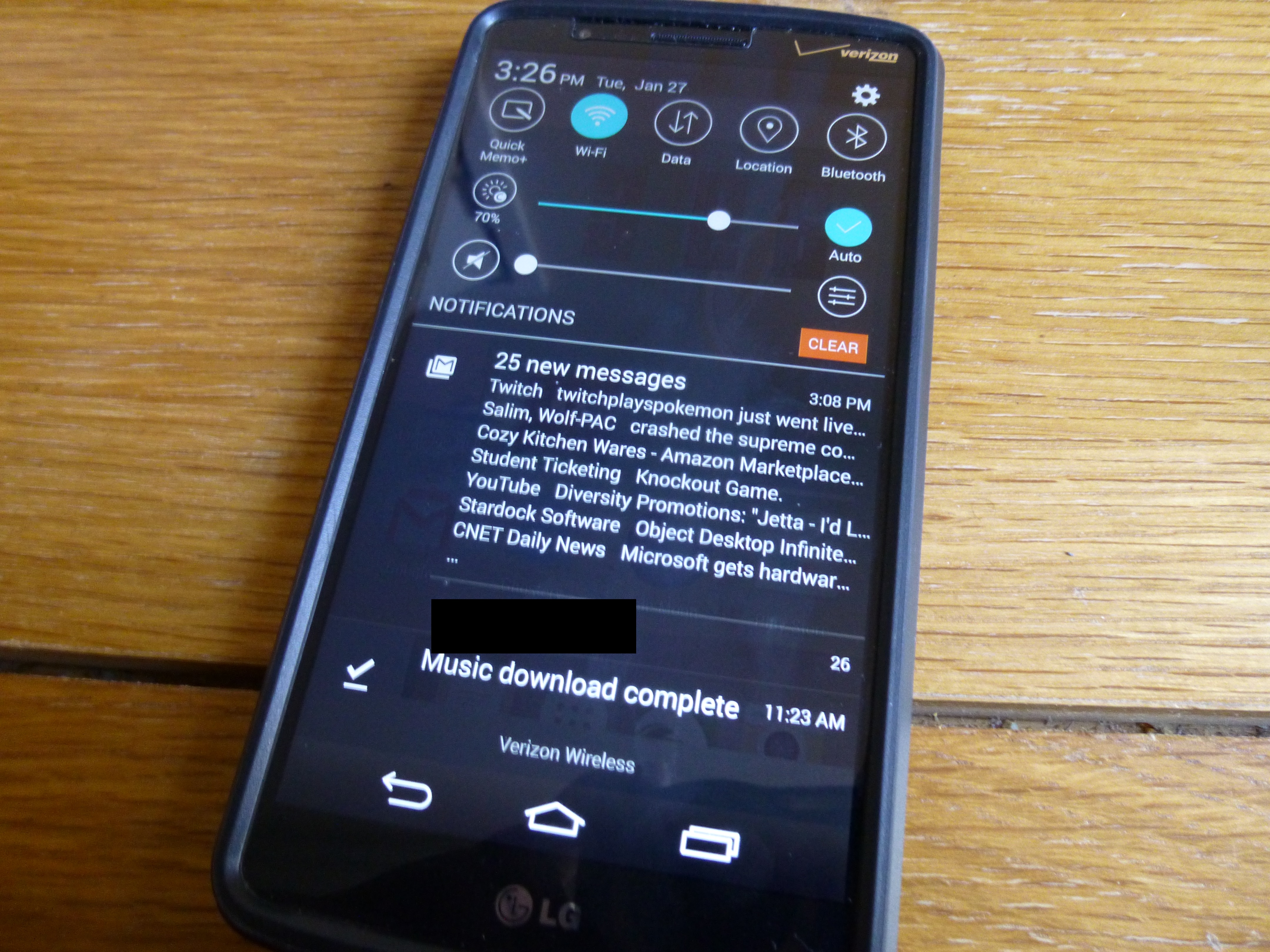 Honestly, I’m not sure about the practicality of the Recents carousel in Lollipop. I think it could be easier to accidentally swipe away or activate apps in this view, but I’m going to reserve judgement until I actually get Lollipop on my G3. Until then, I have no problem using the cards system of the recent apps tray. 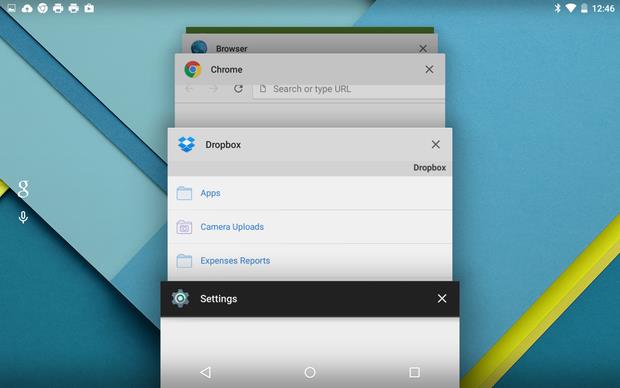 LG has added a nice addition of being able to activate dual window mode, which is similar to Samsung’s Multi Window, from this tray. Admittedly, I haven’t used it much, but it was useful for when I wanted to keep listening to a YouTube video while responding to a message.

Both UIs feature battery saving modes. For Lollipop, a device’s battery life can be extended for up to 90 minutes. The estimated time left on the battery can be found in the battery settings, and the OS immediately lets you know when it will be fully charged once it is plugged in.

Optimus UI’s battery saver works starting at 30% of a full charge once it is turned on, but I question why power usage of the phone cannot be scaled back as soon as it comes off the charger. Again, I have not used Lollipop personally yet, but I assume its interface does allow this.

Moving on to security–This might be more of KitKat vs. Lollipop at this point–, Optimus UI gives the options to lock files in Gallery, encrypt the internal storage, encrypt the SD card storage, set up a SIM card lock, install apps from unknown sources, install credential certificates, etc.

I expect Lollipop to also have most of these options especially for encryption, installation, and credential certificates. Additionally, to not be outdone, Google promises that all new devices will be shipped with encryption already turned on. It hopes to increase protection against malware and other vulnerabilities by using SELenforcing for all apps. Lastly, a phone or tablet can be paired to a device the user trusts such as a smartwatch or a car.

Device Sharing is similar as well, except Lollipop can set up multiple users for a single device on top of guest mode.

While KitKat and Optimus UI support 64-bit SoCs and native apps just like Lollipop, Lollipop is built on the ART runtime. This gives the UI four times the performance of stock KitKat and more compact background apps and services, leading to improved memory usage. This is not everything, of course. You can read more these features at the official Android page for Lollipop.

To wrap this up, LG has shown me that with its Optimus UI on the G3 that it has been listening to consumer feedback and has made an interface that is enjoyable for me in many ways. Sure, I may never use the IR remote control or Smart Bulletin, but I just don’t mind because the overall package is that great. Meanwhile, Google has demonstarted that while it has a vision of the OS that it wants the various manufacturers to follow, it has updated it with features that were used in the likes of Samsung and Motorola’s phones.

Ultimately, as someone who has not yet used Lollipop, I can’t make a conclusion about which is better. Although, I will say this. Based on what experiences I’ve had with Android and various UI up until this point, I don’t feel that desire to root and install a ROM of Lollipop. I was quite satisfied that my last device received KitKat a month or two before I retired it and had 4.2 Jelly Bean before that. Perhaps, because KitKat did not do much if anything for my phone that I began to unconsciously think of Android updates as not as significant performance-wise. Hoping for an update for the latest version also has fatigued me for at least five years now.

I’ve been satisfied for well over a year to have a relatively modern version of Android that can fit my needs of occasional browsing and reading, music streaming and native playback, and downloading any app for the Google Play Store. Yes, I’m still excited Lollipop is coming quite soon to my device, but I’ll wait as long as it takes.