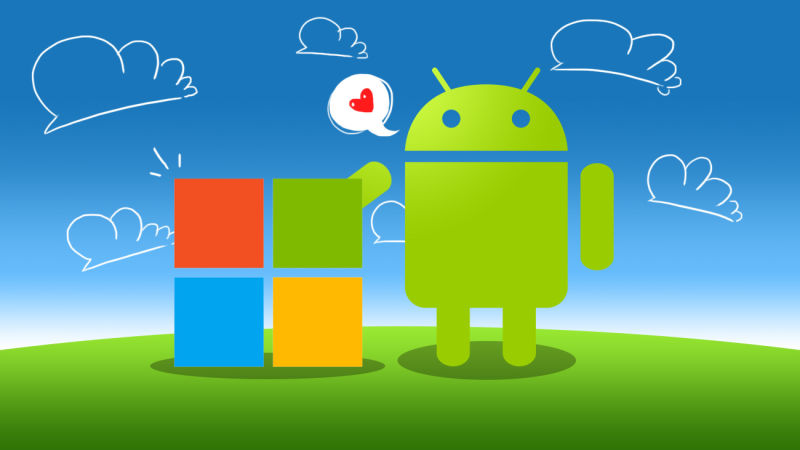 I don’t know about you, but I can’t remember the last time I’ve heard of a new Widows Phone (or Windows 10 Mobile) announcement. That’s because Windows Phone is not doing very well. Back in February, the latest analysis of Gartner found that Microsoft’s controversial mobile software made up to just 0.3 per cent of all smartphones sold across the world in Q4 2016.

And with no new Windows Phone handsets coming out, it’s hard to image the figures going anywhere but downhill in the upcoming months. But this year actually marks a change of strategy for Microsoft who seems to have all but abandoned its Windows Phones efforts in favor of …well, Android.

With its Windows Phone manufacturing dreams shattered, Microsoft probably came to the conclusion it might have future as a Android re-seller instead. Case in point, a few weeks ago, the Redmond giant announced Microsoft Stores across the US will start offering the Samsung Galaxy S8 and Galaxy S8+.

Unlike the Galaxy S7, no Microsoft apps come pre-installed on these phones. However, once connected to a Wi-Fi connection the handset in question gets populated by a slew of the company’s iconic apps including Office, Skype and Cortana.

If we take a look in China, we find Microsoft has infiltrated itself even deeper into the Android camp. Last year, we heard Xiaomi and Microsoft have signed a deal in order to put the latter’s apps on the former’s handsets. Now we’re told Microsoft is selling the Xiaomi Mi 5s complete with Microsoft apps through its Microsoft Stores across China. To sweeten the deal, the company is also offering a 2-year MS Store warranty with the purchase. However, puzzling as it may seem, there’s no trace of a Windows Phone in Microsoft’s stores in China. Yes, folks it’s that bad.

Still there might be hope for Microsoft. The long-rumored Surface Phone might be the pivotal product needed to reserve these failing fortunes. Tons of digital ink has been devoted to describe the phone’s alleged specifications. A few months back we even heard the product might actually come equipped with a futuristic 2-in-1 foldable body and running Windows 10 Mobile.

But at this point there’s no real indication Microsoft actually has plans to release a Surface Phone in the near future. Has Microsoft given up altogether on smartphone production and from now on will just continue to sell Android devices? It’s quite possible, as the evidence presented above seems to indicate. The naked truth is that if Microsoft truly believed Windows Phone had a place and a future in the world, it would have sold WP products through its stores. It stopped doing so and this should tell us something.