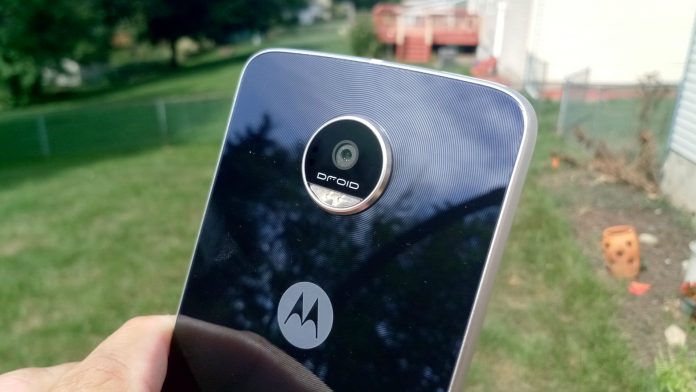 Motorola today announced its latest smartphone, the Moto Z Play Droid, which figures to be an exclusive smartphone for Verizon. With specifications that fall more in the middle of the pack for today’s handsets, it’s still quite the attractive package.

We received a review unit of the Moto Z Play Droid on Friday and have spent a couple of days getting to know the device. We’re not ready to compile a full-on review of the phone just yet, but we do have some first impressions we’d like to share. 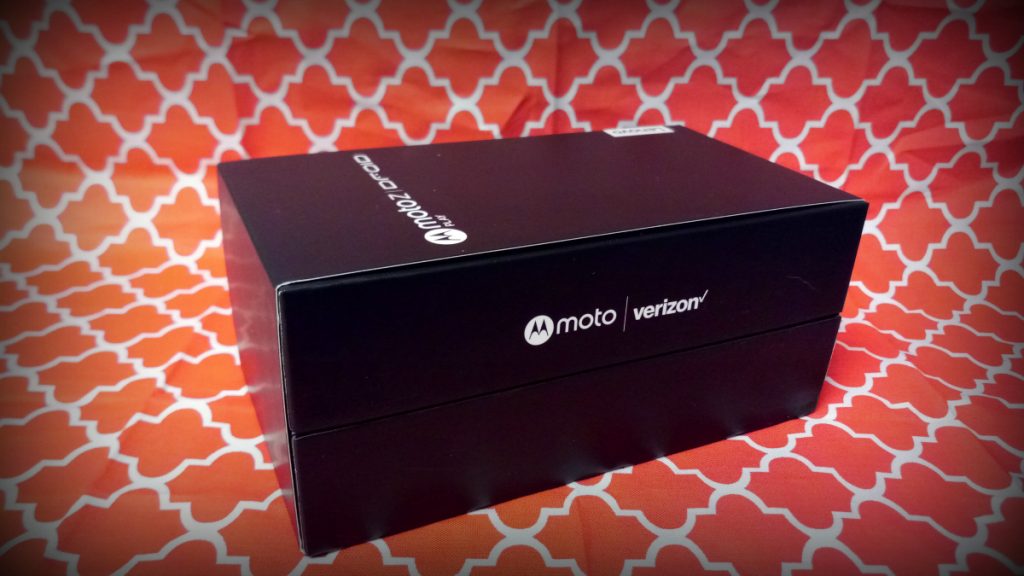 Taking the phone out of the box you realize that this iteration of Motorola is unlike anything else in the company’s history. Like the Moto Z Droid and Moto Z Force Droid this phone is svelte and sexy. On the surface it exudes premium craftsmanship and begs to be looked at from all angles.

It’s almost as if Motorola took the old Cliq XT design from years back and gave it a 2016 reboot. By that we mean it has a modern design with black cues but is also trimmed in a silver finish. It’s familiar to us because we knew something similar from 2010, but it’s oh so fresh with more solid materials. Dare we say it also looks as if Lenovo/Motorola took more time with details.

The Moto Z Play Droid is a heavy device; it’s more dense than we expected it to be. Looking it over, there’s so much here that intimidates us. It has been a very long time since Motorola delivered a phone that we were afraid to leave the house with over fear of ruining it. One drop and we’re afraid it would be scuffed, scraped, or worse, shattered. We want to show it off so badly but, at the same time, we want to protect with some sort of case. As much as we like to insure ourselves with cases, we enjoy looking at the details on the rear. 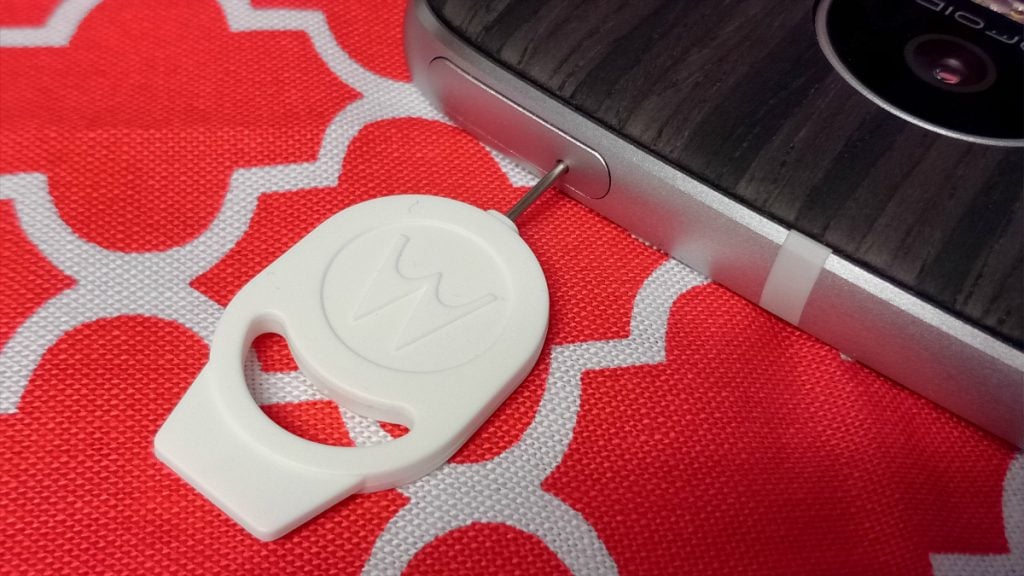 It didn’t take us long to realize that there’s no Verizon branding on the phone. While it’s certainly prominent on the box and in the apps, it’s not on the surface of the handset. There is a “Droid” branding under the camera, but that’s it. Otherwise, it’s a simple stylized “M” on the rear and a Moto on the front above the display. We’re not sure if this was Motorola’s doing or if Verizon loosened its grip a bit, but we’ll take it.

Holding and using the Moto Z Play Droid with one hand is comfortable, even with our smaller hands. At 5.5-inches, the display does have a little thicker bezel than some of its competitors, but we’ve seen worse. The 1080p resolution is crisp and color is quite accurate in our first few days with the phone.

In addition to the phone itself, the box also comes with a wall charger (USB Type-C), a MotoMod protective shell for the rear, and a tool to remove the microSD and Nano-SIM cards. There’s also a small booklet but there are no headphones. Speaking of which, a quick glance at the bottom shows us that Motorola did leave the 3.5mm port in this model. 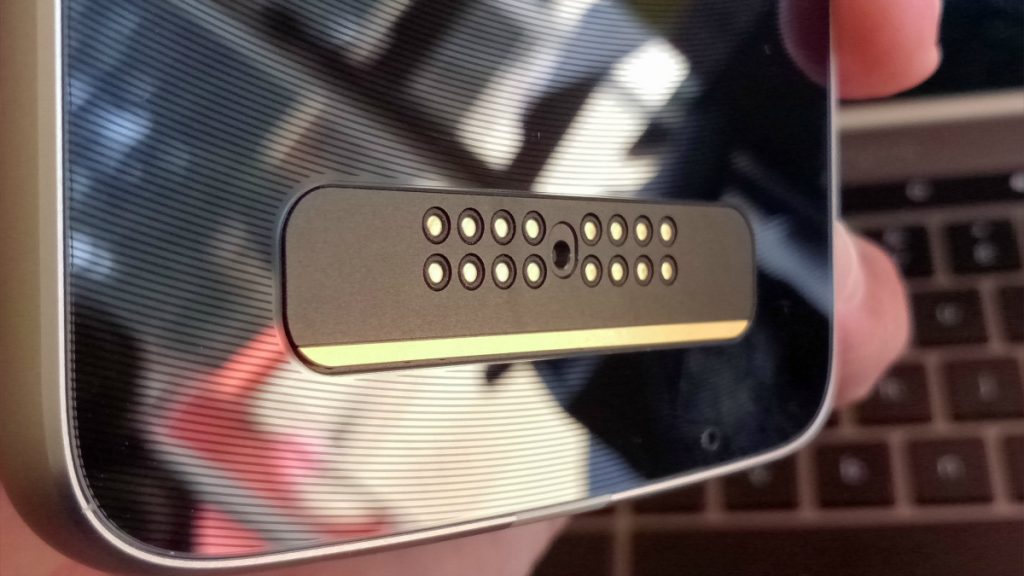 The protective rear shell snaps into place via magnets and fits snugly against the phone. In fact, you’d be forgiven if you thought that it was part of the handset itself. The wood grain design has the same realistic appearance that is found in other, previous Motorola phones built in the Moto Maker tool.

Powering on the phone and checking the app tray we find that there’s no mistaking this for anything but a Verizon model. There are nearly one half dozen apps with Verizon branding pre-loaded including VZ Navigator, VZ Protect, My Verizon, Message+, and Cloud. You’ll also find a couple of others here, too: Android Pay, Caller Name ID, Amazon Kindle, IMDb,  NFL Mobile, and Slacker Radio.

After spending time away from Motorola phones, it was refreshing to be return to the software experience. Specifically, we were happy to find a largely untouched version of Android (6.0.1 Marshmallow) with only minor additions. And when we say additions, it’s subtle stuff that really enhances things. 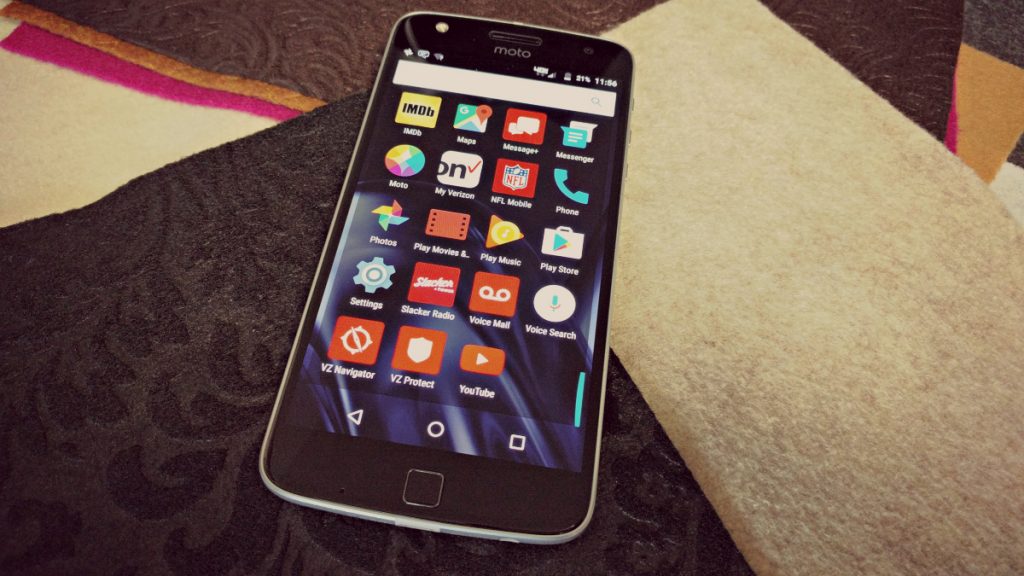 Who doesn’t love picking their phone up and seeing the screen wake up? Moreover, we appreciate being able to twist our wrist to launch the camera, double chop to kick on the flashlight, or simply wave their hand over the display to wake it? To us, it’s just the right amount of OEM customization.

A couple of days into using the phone and we’re totally in love with it. Sure, the Moto Z Play Droid isn’t going to best any benchmarks but that matters little to us. We’re not pushing our phones to their limits and wager to guess that most of you aren’t either. With that said, the Snapdragon 625 processor (2GHz octa-core) and 3GB RAM do the trick so far. We’ll keep adding more apps and games to it to see how it fares with more demanding titles; look for that in the full review.

The fingerprint reader was easy to set up and has responded quickly in every situation we’ve employed it. Whether waking a phone up or authenticating a purchase, we found it to be accurate and fast. We’d love to see Motorola put some sort of reader on the rear where the logo is, but that’s a quibble. To us, if you’re not pulling double duty with the reader acting as a home button, we say move it around back. 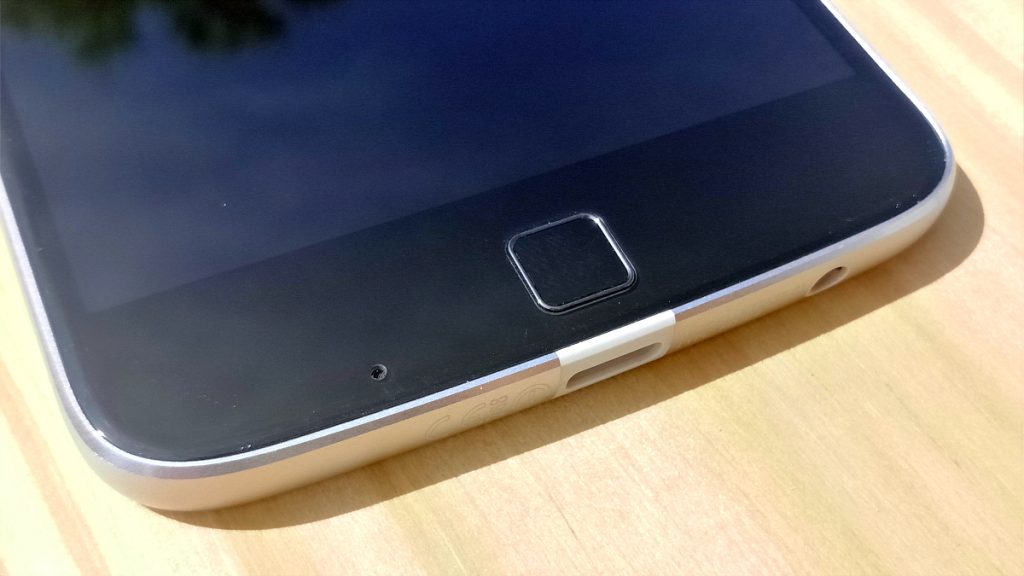 As for speakers, there’s only one on the Moto Z Play Droid; it’s the same one for taking calls. Listening to music is decent as there’s plenty of sound. It could be more rich, but we don’t ever find ourselves breaking out a phone to take in a playlist.

Watching videos on YouTube or Netflix was pleasurable, but not overly robust. Again, we’re not the type to spend extended periods on our phone watching movies and expecting a theater experience. Throw in some headphones or pair to a speaker and now we’re talking.

The 16-megapixel camera features laser autofocus, phase detection autofocus, and an f/2.0 aperture. There’s also a dual-LED flash on the back to brighten up your shots. We’ve not tested the camera in all lighting conditions yet, but thus far we’re impressed with the shots. The software is no-frills so there’s something to be desired in some aspects. On the other hand, we like that we’re not bogged down with too many choices for scenarios. we’ve yet to kick the tires on the front-facing camera. 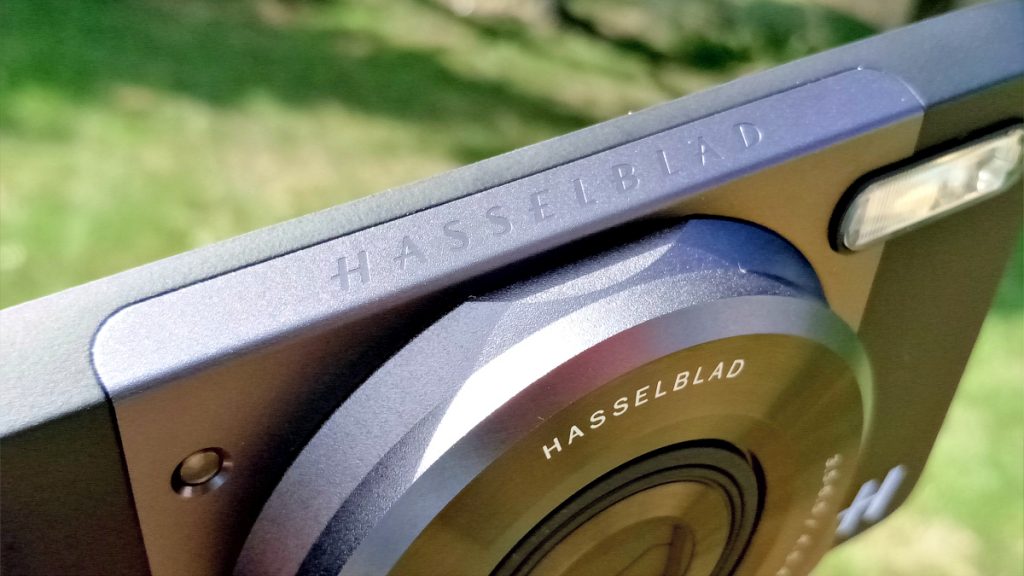 As part of our review kit, we also received one of the Hasselblad camera MotoMods to try out. Indeed, you can snap this guy on to the back of the phone as easily as the case and give your Motorola phone a 12-megapixel camera with a 10X optical zoom. Capable of taking RAW images, the camera also boasts a Xenon flash.

As you might expect, the camera can connect with both the Motorola Z Droid and Motorola Z Force Droid, too. Moreover, the other MotoMods launched in the last few weeks can be attached to the Moto Z Play Droid. We’ve already snapped a number of pictures with the Hasselblad MotoMod and will share those in our full review.

The phone comes with an internal, non-removable 3,510mAh battery. We’ve found that it lasts us well beyond two full days of use but we’re not using it as a daily driver just yet. Additionally, we’ve yet to load all of our apps and accounts to the handset so we do expect to see it drop. Charging is super fast, for what it’s worth, thanks to the TurboPower cable. According to Motorola, spending 15 minutes on the charger will result in 10 hours of power.

We’re really enjoying the Moto Z Play Droid so far and look forward to putting it through its paces. Look for a more thorough review in the coming days and weeks!