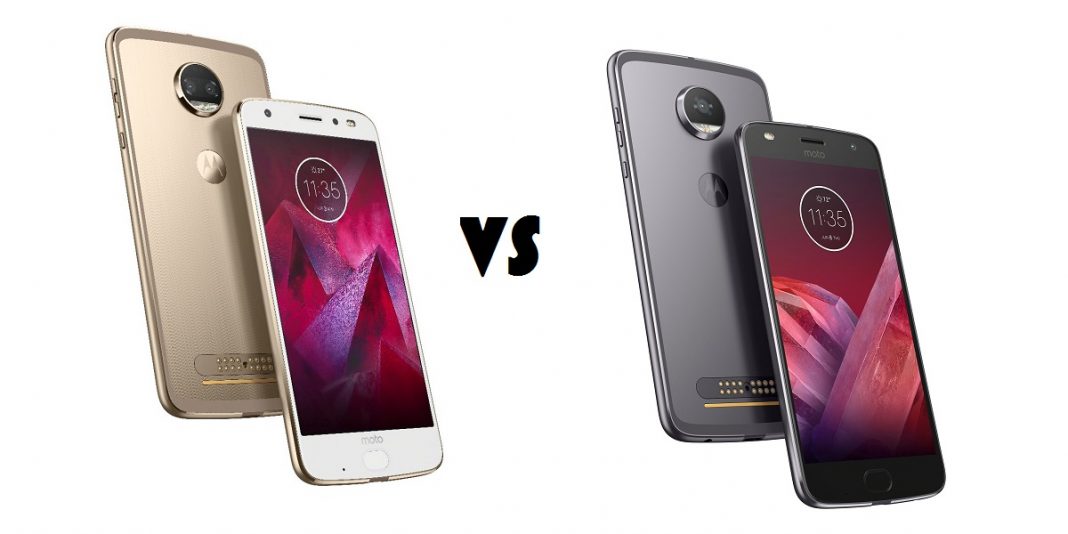 In 2017 Motorola has chosen not to launch a standard Moto Z2. Instead, customers are given the choice between the middle-range Moto Z2 Play and the more powerful Moto Z2 Force.

So which should you purchase? The Moto Z2 Play with its bigger battery or the faster Moto Z2 Force? Read below to get an idea about the key differences between the two. 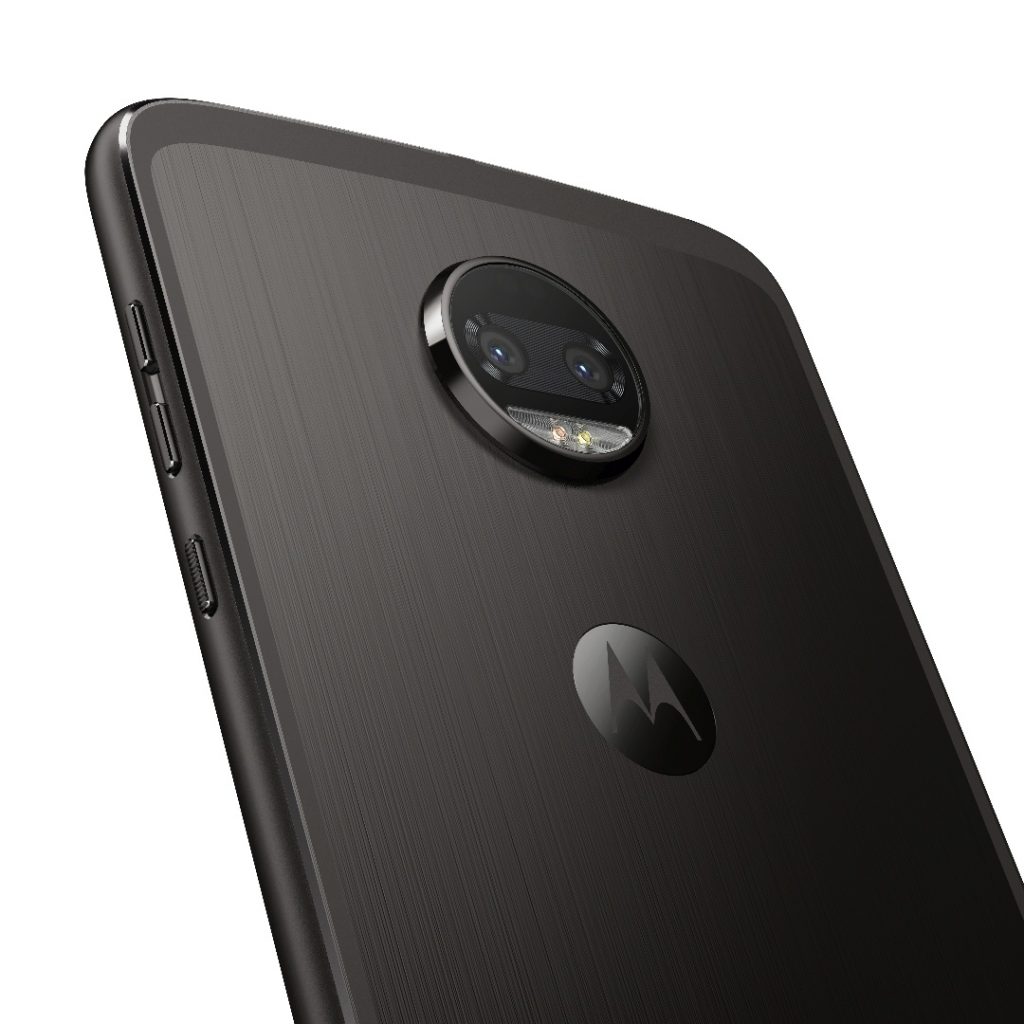 At a glance, the two handsets look quite similar. The simplest way to tell the difference between the two is to look on the back, as the Moto Z2 Force includes a rear dual-camera setup, while the Moto Z2 Play features a singular sensor.

Both products have a metal back, with the Moto Z2 Force boasting a 7000 series aluminum unibody, 80% stronger than its predecessor.

This year, Motorola focused on slimming down the Z lineup, so the Moto Z2 duo are 1mm thinner than its predecessors measuring 155.8 x 76 x 5.99 mm. This has been done at the expense of the battery, about which we’ll talk about later. 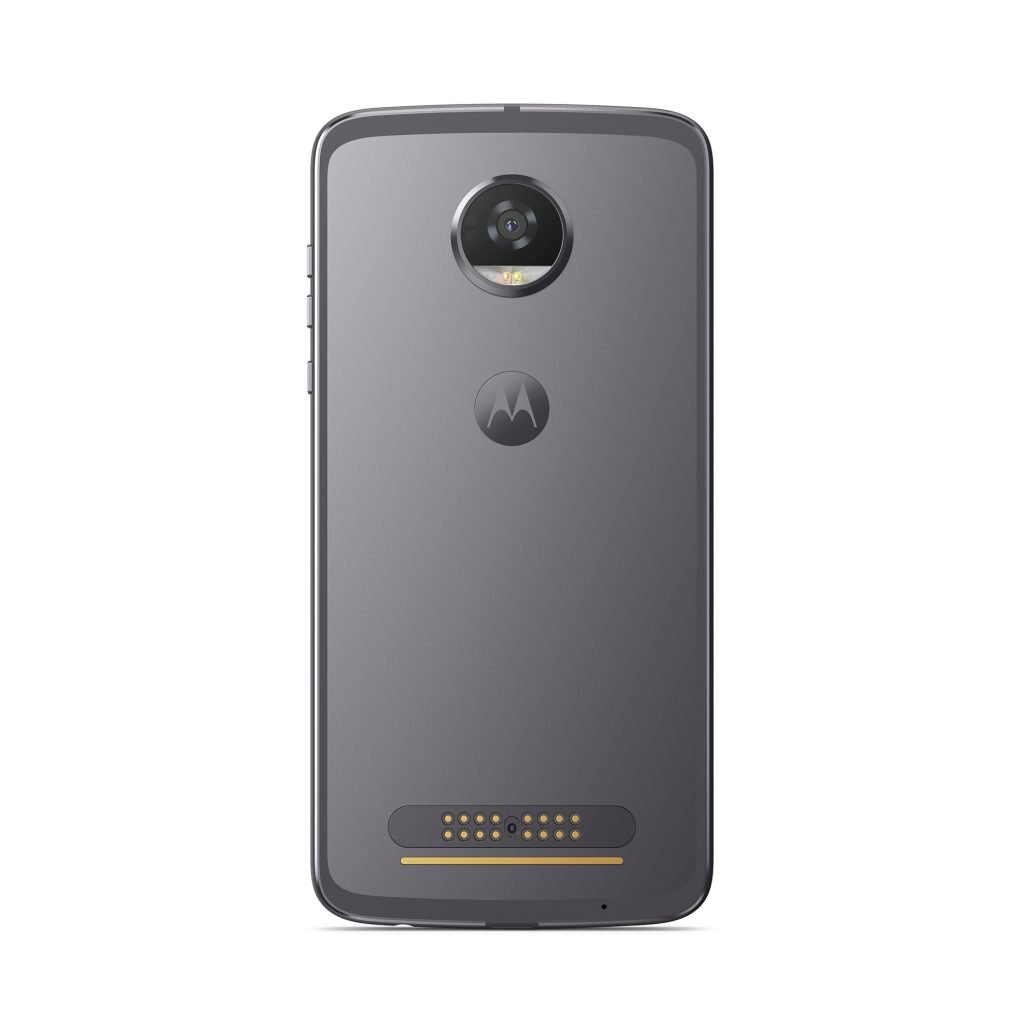 The two phones include a physical home button that doubles as a fingerprint scanner and also supports gestures. Thus customers will be able to control navigation by doing things like swiping to the right to go back or swiping left to open the navigation tray.

While the Z2 Play includes a 3.5mm headphone jack, the Z2 Force does not carry one. Both models offer NFC functionality.

The Moto Z2 Force and Moto Z2 Play are compatible with Moto Mods, old and new. The first model is available in Super Black, White/Gold, and Lunar Gray, while the second product can be purchased in White/Gold and Lunar Gray.

The Moto Z2 Force puts a focus on ruggedness. It’s made of 7000 series aluminum and features a 5.5-inch ShatterShield display with 2560 x 1440 resolution which is basically “drop-proof”.

While both models rely on a 5.5-inch AMOLED display, the Moto Z2 Play’s offers only 1920 x 1080 resolution. Unlike the Samsung Galaxy S8 and LG G6, the two Motorola handsets feature the usual 16:9 aspect ratio. 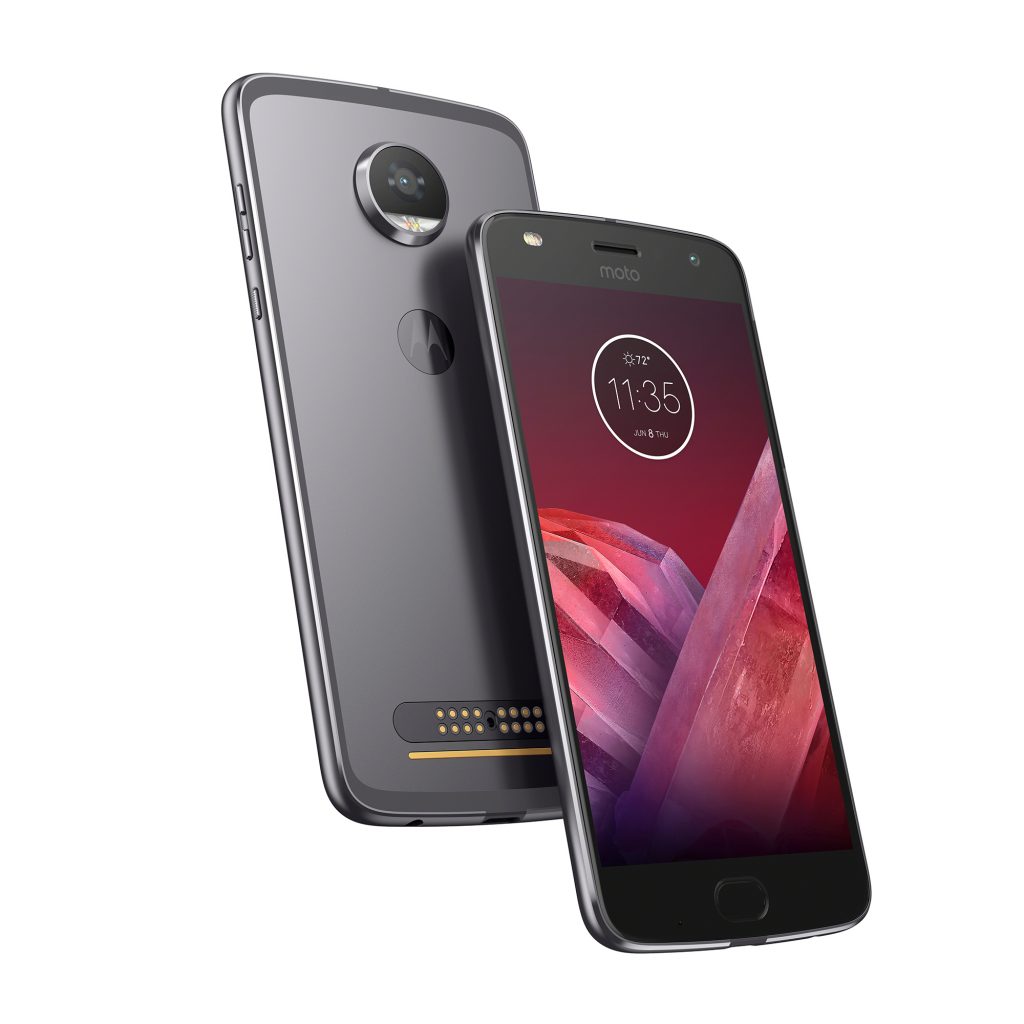 In the US the Moto Z2 Force will be available in a 4GB of RAM/64GB of internal storage configuration, although the rest of the world will get 6GB of RAM.

As for the Moto Z2 Play, it comes equipped with either 3GB or 4GB of RAM and 32GB/64GB of built-in storage.

Note that both models include a microSD card slot onboard. 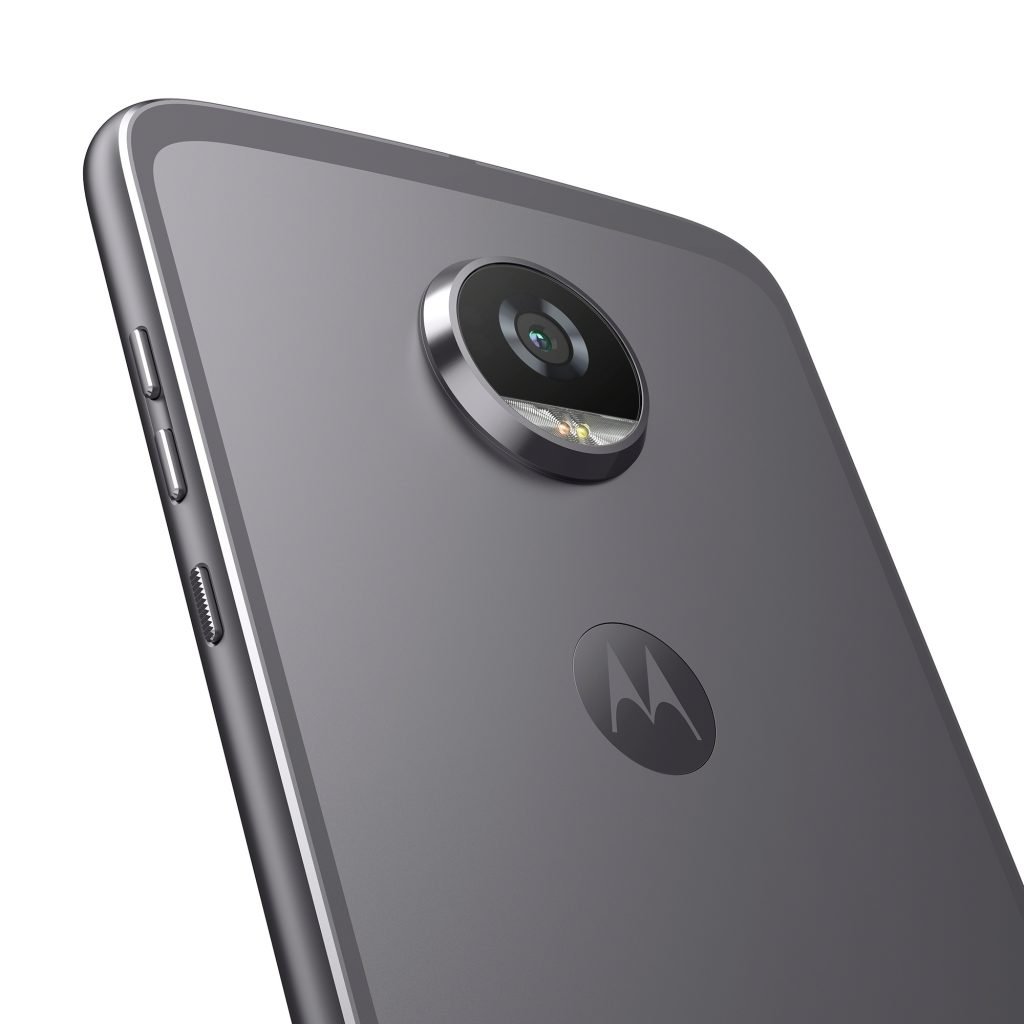 Another major distinction between the Moto Z2 Play and Z2 Force is the main camera. The Z Play includes a single 12-megapixel sensor on the back with f/1.7 aperture, while the Z2 Force has a dual-camera setup which is quite similar to the one you’ll find one the Huawei P10 Plus.

It pairs a color 12-megapixel sensor with a 12-megapixel monochrome both with f/2.0 aperture, phase detection, and laser-assisted autofocus. Thus customers will be able to take advantage of native black-and-white photos, selective focusing, and multi-image processing. Both products feature a 5-megapixel selfie shooter onboard.

The two phones run Android 7.1 Nougat out of the box and will certainly receive the Android O update when it becomes available. They come with the Moto app pre-installed which includes features like the Moto Voice, Motorola’s own answer to the Google Assistant.

We should also note, the Moto Z2 Force is the first handset include a new Moto Key – which is a security and password manager. 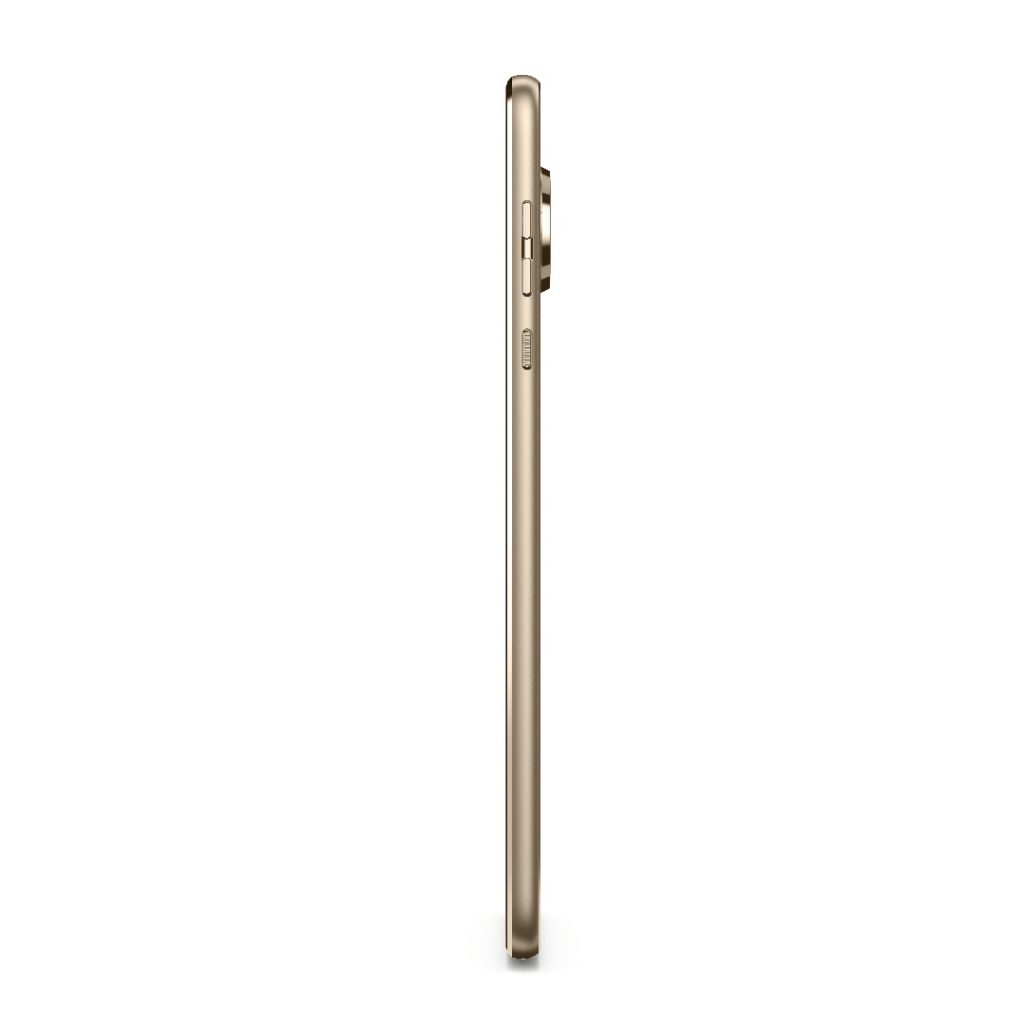 Battery is a tricky issue when it comes to this year’s Moto Z2 models. You see Motorola wanted to offer slimmer devices in 2017 and it did so at the expense of the battery.

As for the Moto Z2 Force, the handset relies on a 2,750 mAh battery, while its predecessor enjoyed the services of a hefty 3,500 mAh powerhouse.

The reduction in battery size is probably going to make a lot of Moto fans unhappy, but luckily battery life can be supplemented with the help of the Moto Mods (although you have to pay extra for them).

The Moto Z2 Force is the most expensive of the two carrying a hefty price tag of $750 and up (depending on where you buy it from).

As for the Moto Z2 Play with 3GB/32GB of storage you can grab it from Verizon right now for $408 outright or $10/month for 2 years. An unlocked version is going to become available at a later date.

Sorry, a Moto Z3 Force is not coming this year

Deal: BOGO Android phones at Verizon and more just in time for back to school