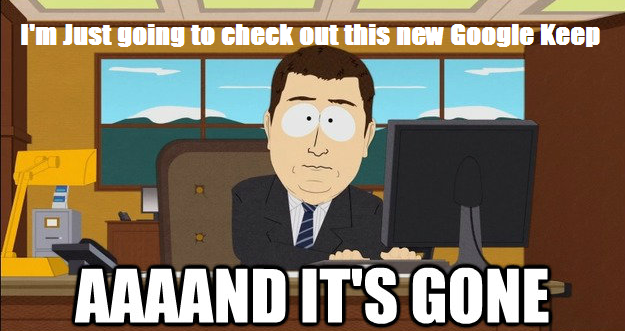 Google briefly released their note-taking application “Google Keep” on Sunday via Google Drive, and then quickly yanked it back out – but, not before screenshots were taken. The guys over at Android Police managed to get off a couple quick snapshots before everything went back down.

Google Keep closely resembles Google Notebook, a service that was discontinued in 2009, that let users clip and organize info from around the web, as well as Evernote. Google Keep is a rambunctious beast to keep caged away from public view, too – A screenshot was accidentally leaked in a Google+ post back in July 2012, straight from Google’s own account.

Some are expecting that Keep will come to the public very soon, while others speculate this was simply a “dev error” for a product not ready for release. Keep your news feeds pointed here for more information as it becomes available, and let us know your thoughts in the comments.