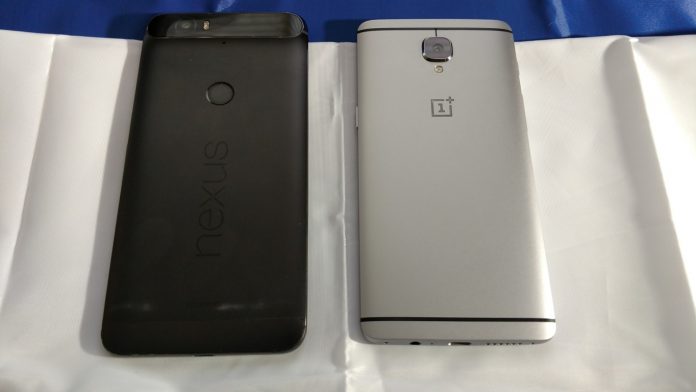 OnePlus and Google, partnered with Huawei, have targeted a similar audience with their affordable, high-end phones. Both the OnePlus 3 and the Nexus 6P offer premium build quality, features and specs at nearly half the cost of the likes of Samsung and LG, along with a near stock version of Android out of the box.

Despite the Nexus 6P being out for almost a year now, it still is a very solid contender in the current field of phones, and is still my personal daily driver. The OnePlus 3 has the advantage of age, but exactly how well do these two phones stack up with one another?

The OnePlus 3 eschewed its previous design aesthetic for a lovely all-metal exterior and subtle curves. It is a looker of a phone and a joy to hold in the hand, and if you asked anyone they’d probably think this was a $700 flagship device. 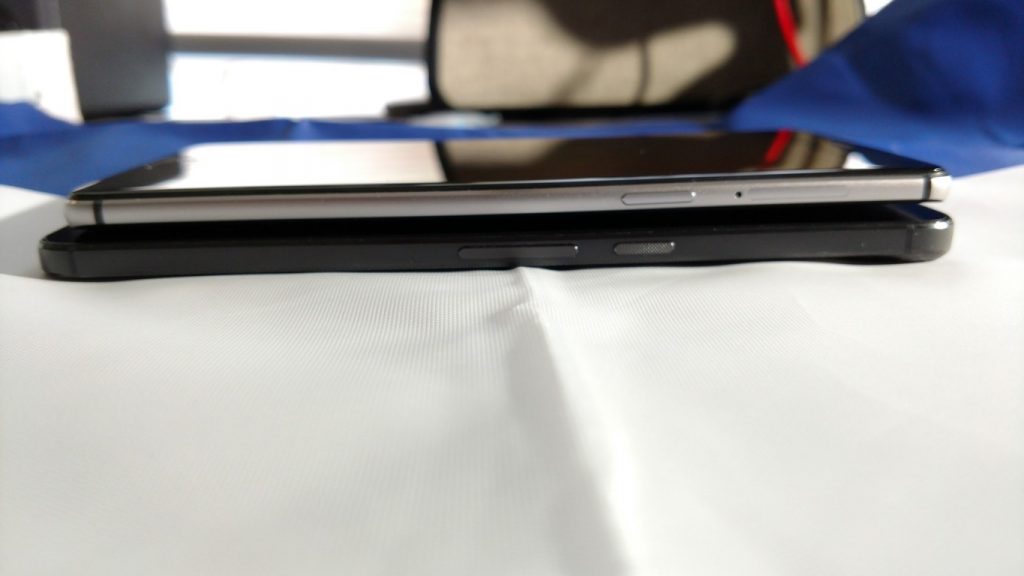 The Nexus 6P has much of the same design cues as the 3, with a smooth all-metal design and no frills. There are some differences, like a more flat front glass panel and a overall more slab-like feel. 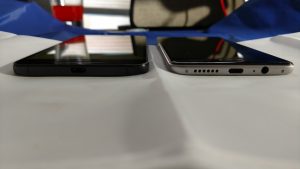 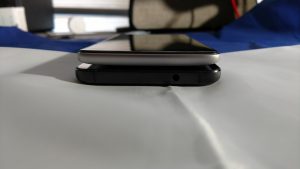 The Nexus has a set of front-facing dual speakers that offer full sound, which are great for gaming or video watching, while the OnePlus 3 opted for a single bottom-firing speaker. The speaker on the OnePlus is no slouch, however, and proved to be clear and loud without too much distortion at high volume. The Nexus speakers are still my choice though, as the front-facing speaker design is hard to let go of once you’ve experienced it. 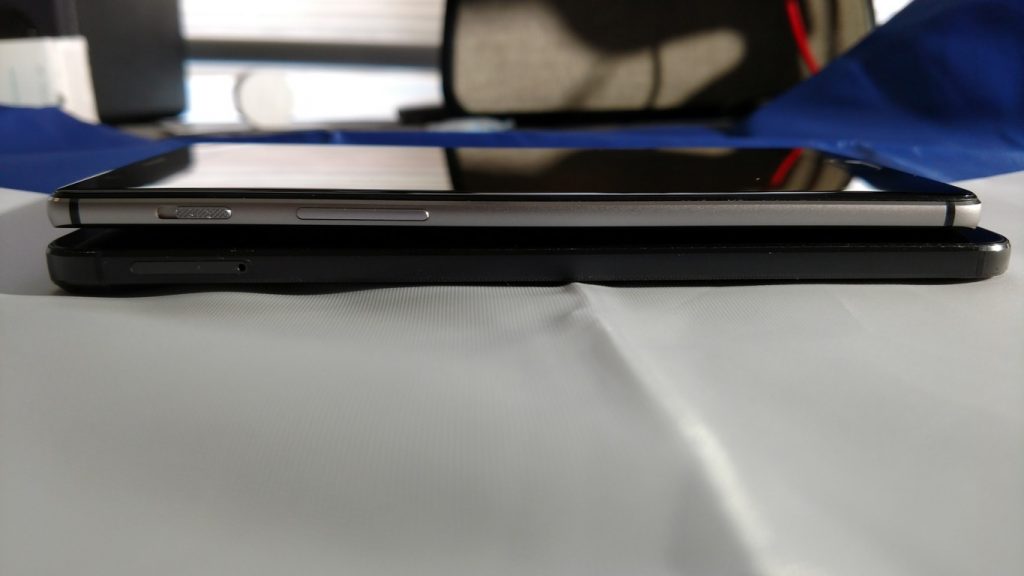 Both phones are nice to hold in the hand, but their size may prove difficult for some to handle due to the slippery metal, especially the larger Nexus. A case can easily remedy that issue, and otherwise both devices get top marks on external design.

Check out our Nexus 6P review by Derrick Miyao here

Check out my review of the OnePlus 3 here

The screen on both the Nexus and the OnePlus are AMOLED panels, with the OnePlus being a 5.5 inch and the Nexus a 5.7. The Nexus’ screen is a higher 2560×1440 resolution, compared to the standard 1920×1080 HD panel on the 3, but both offer great color and brightness. Images are sharp and clear on both, but the Nexus seems to me to have just a slight bit more brightness at max settings, which is nice for direct sunlight. The OnePlus does offer more customization, with color balance control to fine tune your screen.

Beneath the screen is a different story. The OnePlus 3 comes stacked in terms of internals, with a massive 6GB of RAM coupled with a Snapdragon 820, 64GB of memory and a 3000mAh battery with USB-C. This phone sizzles, and handles multitasking with ease. The speed and smoothness of the OnePlus 3 still blows my mind today, after weeks of using it. That’s not to say that the 6P is slow by comparison, however. Huawei packed a Snapdragon 810, 32 or 64GB of memory and 3GB of RAM in there along with a massive 3450mAh battery, also with USB-C. Even after months of regular use, my 6P is still as fast as ever, and only a step behind the OnePlus 3 in most regards.

Battery life on both phones are excellent, with neither phone dying on me before 8 p.m. after regular usage. The 6P’s more powerful screen does make it susceptible to dying quickly when under heavy use however, but regular daily usage will be no problem. Also, both phones offer their own fast charging solution, with OnePlus’ DASH charging that pushes the phone’s battery to 60% in 30 minutes, and Huawei Rapid charging that can’t quite match the speed of DASH but still offers a full-day’s charge in less than an hour.

Both the OnePlus and the Nexus 6P offer nice clean ROMs of stock Android. OnePlus’ Oxygen OS is essentially stock with a few minor tweaks and additions baked in, like more customization options and gesture controls that are nicely implemented and useful.

Google pairs the Nexus line with its Google Now Launcher, which is also very nearly stock with only a simple set of tweaks like the Google Now page to set it apart. The Nexus 6P also has a huge advantage in terms of updates, as Google pushes new versions of Android to the Nexus line first. If being on the bleeding edge of Android is important to you, there’s really no comparison here. The Google Now Launcher has been my go-to launcher since the Nexus 5, so I’m a bit biased but both offer excellent software experiences that few would take issue with.

Camera performance on both phones are great, but there are some big differences.

The OnePlus comes with a 16MP f/2.0 shooter with OIS and a single LED flash in a prominent bump on the back of the phone. The Nexus 6P has a 12.3MP f/2.0 lens with larger 1.55 micron pixels, and no OIS hidden behind a “visor” of glass on the top of the back panel that also houses the NFC and other sensors.

Both cameras take excellent photos, but the OnePlus 3 has a big speed advantage in this department, as the Nexus uses HDR+ more prominently, making for a much slower shutter speed compared to the 3. The Nexus does better in low light, due to the HDR+, and the OnePlus offers a full manual mode for those who are interested in that, for more fine tuned control of the camera settings. The image quality on both devices are excellent, and I’d be hard pressed to pick a winner between them.

I would say that if I had to pick a winner, it’d probably still be the Nexus 6P for my daily driver phone. The larger, higher resolution screen and Android N are too hard for me to part with for long, despite how much I love the OnePlus 3.

Both the Nexus 6P and the OnePlus 3 are both excellent high-end flagships for their respective companies. Choosing between them is really a difficult choice, but there a few factors that may help sway you one way or another. The $100-$150 less cost and beefier specs of the OnePlus 3 may compel you towards it, but the updates, higher resolution screen and front-facing speakers make the Nexus an enticing choice as well. I will say that you can’t go wrong with either device right now, and with a new Nexus sure to be releasing in the coming months, the 6P may even see a price drop. Those who simply can’t decide may also want to wait out the new Nexus device as well, to see how it stacks up.