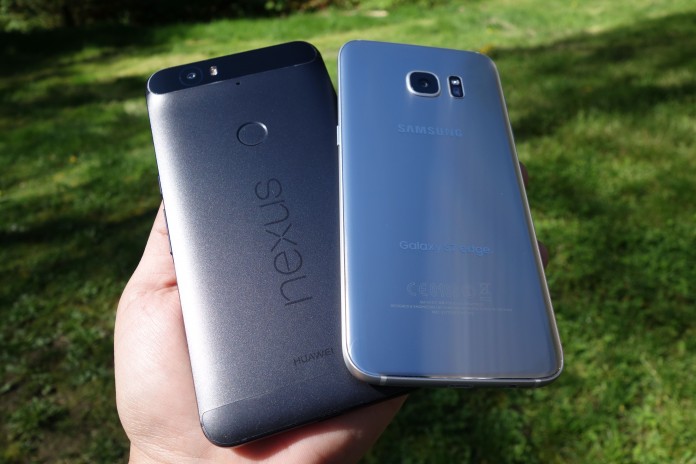 It’s not hard to find an argument against Samsung’s latest when we compare it to Google’s pure Android offering. But that goes both ways. While the Nexus 6P is a great phone, it’s certainly not perfect. Samsung actually did a better job in numerous ways. “How so?” you ask? Let’s run through it.

When I heard that the Nexus 6P packs a current Samsung AMOLED panel, I was content. I had the previous Nexus 6 and was dissatisfied with Motorola’s AMOLED implementation (the outdoor visibility was terrible). Unfortunately, the 6P’s display pales in comparison to how it looks on a Samsung device (I also owned last year’s S6 and Note5). It goes to show ya that it’s not just about the hardware, but how you use it. Huawei was not equipped to make that panel shine.

Therefore, when I put the S7 Edge and Nexus 6P side by side, to my eyes, there’s just no comparison. The 6P’s display looks duller and has a color tint to it. It also can’t get as bright and doesn’t perform nearly as well as the S7 Edge’s display outdoors. I can barely see what’s on the 6P’s screen when the sun is shining.

The camera on the 6P is a vast improvement from its predecessor (which actually doesn’t say a lot in itself). The move to large 1.55µm pixels really gives it a low-light advantage in the flagship arena. The Galaxy S7’s camera pixel size technically falls short, at 1.4µm.

However, the performance of the S7’s camera clearly outshines Google’s sensor is a couple ways. First, Samsung’s Dual Pixel system allow for extremely fast auto-focusing. It’s way faster then the 6P’s auto-focus. This is because each and every pixel in Samsung’s sensor helps the process. In my experience, the 6P’s focusing can be hit or miss, while the S7 is consistent.

The lens’s aperture (size of the opening) is larger on the S7 – f/1.7 vs f/2.0 on the 6P. This also helps capture more light in those tricky low-light situations. Check out my Nexus 6P vs S7 Edge camera comparison; several of the images are brighter and more vibrant.

I could not believe how much top and bottom bezel is on the Nexus 6P when I first saw it. The phone is much taller than a 5.7″ device should be. Granted, there are two front-facing speakers, but the Nexus 6 had them too and kept reasonable bezels.

It’s no secret that Google dislikes microSD expansion. The company dropped it from Nexus phones a long time ago, and despite manufacturers fighting back, Google continues to stand its ground.

But from a consumer’s perspective, it’s hard to deny how nice microSD expansion is. We usually get charged an arm and a leg to increase the internal storage, leaving many of us to just settle with the base option because we can’t afford any more. We also can’t forget that the OS takes up a chunk of that storage. Expanding via microSD is such a cheaper alternative, and you can potentially get a lot more storage than any internal storage option would offer. The Galaxy S7 lets you add 200GB more on top what you already have.

Many of us get swept away by the oohs and awws of a premium-built smartphone. It’s easy to forget that phone’s live on our hands and are always in a state of danger. I personally hate cases and always baby my phones, but sometimes there’s no stopping life from messing with it. While the Galaxy S7 is far from a rugged phone, it at least can survive water and dust attacks. An IP68 rating says that it can be submerged in up to 1.5 meters of water for 30 minutes and supposedly be fine. The Nexus 6P just has its looks, so users need to be more careful with it.

The point of this discussion comes down to this: Samsung easily bests the Nexus 6P in terms of hardware. You’ll see many Android enthusiasts say that the 6P wins hands-down because software is most important, but what actually matters most depends on you. Samsung’s TouchWiz interface isn’t deficient, it works. And if you put hardware at the top of your list (like I do), then the better phone is clear.