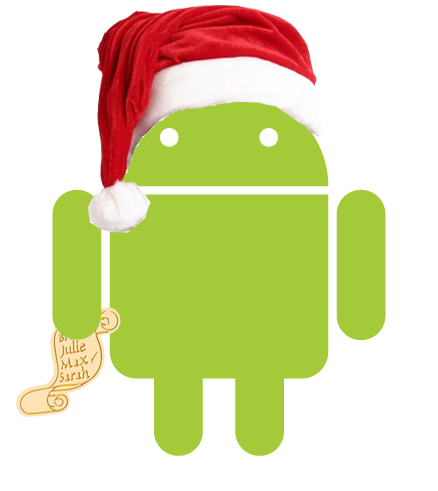 The second part of the Android Developers Challenge should be getting off the ground before too long and I have a little Christmas wish to go with it.Â  Please release the widget part of the SDK!

The first challenge seemed to revolve around location as many of the winners used various maps and geo-based features.Â  I’m guessing the second challenge might be based around constant connectivity.Â  We saw some really neat things show up with Android that were previously unseen on other mobile platforms.Â  Widgets could distance that gap even further.

I’m not anywhere near the inner workings of Google, nor do I have any advance look at the next challenge.Â  Still, I’m having a tough time putting my finger on what’s yet to be touched with Android.Â  Yes, Bluetooth and GTalk API’s could unlock big doors, but apps written with widgets in mind are a totally different animal.

I’ve said it here a few times before, but I am purposefully leaving the right third of my G1 screen free and clear of any icons or clutter.Â  I’m waiting for the live, always-on widgets that keep me truly connected.Â  Yeah, it’s nice to pull up an app or two to see what’s going on, but I’d rather have the same information constantly beamed to me.

Off the top of my head I can come up with the following services and features that I’d like to be able to see at a glance:

There are a handful of others that I came up with, but you get what I am saying.Â  I’ve seen some pretty good apps so far, yet nothing that’s blown me away since the initial launch of the Android Market.

Some applications I’ve played with would be much exponentially better with a widget to compliment the actual program.Â  A few that spring to mind are the Plusmo sports apps, Weatherbug, and imeem Mobile.Â  A couple of the RSS readers and stock quote programs wouldn’t get deleted so quickly if I didn’t have to take so many steps to pull things up.

What better way to constantly connected than to have a thin app that pulls information from the clouds and puts it in pretty little desktop program?Â  Companies like CNN, ESPN, and VH1 seem logical choices to release little scrolling apps that constantly refresh the latest news, giving a new twist on the RSS feeds.

Why not put out an app that pulls up locations of your friends every hour?Â  A Twitter app that keeps you in the loop.Â  A widget that shows your speed and/or direction for GPS enthusiasts. A system monitor to keep an eye on disk space?

Even some of the first round winners of the Android Developers Challenge could gain with widget support.Â  Apps like Compare Everywhere and ShopSavvy would be even more “killer” if they had wish lists that stayed on top of your screen.Â  Maybe something that shows the most recent prices of certain items that you’ve had your eye one for a while.

What about media players like TuneWiki or StreamFurious that can be docked with quick(er) access to your streamed music and videos?Â  While I’m on it, why not a YouTube widget with its own search listed below it? That picture frame that comes with Android is cool, but why not a scrolling feed of Flickr albums?

I have no doubt that Google will be releasing some awesome widgets for some of their own programs.Â  Look for GTalk, GCalendar, Google News, and Google Reader to make their official debut with some fanciful widget support.

Some people would even be content with different skins to the clock that comes loaded on Android.Â  For others, if you throw in a Wikipedia search bar, they’re golden.Â  There’s a lot of possibility out there for mobile developers, and even for Android as an OS.Â  How about some virtual pets to care for or plants to water?Â  I can’t even begin to tell you how many people I’ve run into that are fascinated with the red tulips on my desktop at home, like I’m running something special.

Currently, third party apps cannot run in the background of the iPhone.Â  That is unless you go the jailbreak route.Â  Not only can Android run apps in the background, it also has the potential to keep things going indefinitely with widgets.Â  I’ll see your MLB at Bat app and raise you every other sport known to man.

The same goes with the eBay app that the iPhone has.Â  Forget about opening up a program to keep tabs.Â  Android makes it possible to have separate widgets for items you are watching, selling, or bidding on.Â  How about a live countdown until certain auctions are over? And when it’s all over, your PayPal widget alerts you to the new deposit.

What kind of widgets would you like to see developed for Android?Â  What apps have you come across that could stand some widget help?Â  Let me hear it in the comments below.

I recently left Android and spent a few weeks living with an iPhone as my daily driver. Find out what I loved and what I hated about it.
Read more
Opinion

After a year of updates, Stadia has made great strides, but still falls short of the cloud gaming revolution Google teased us with prior to launch.
Read more