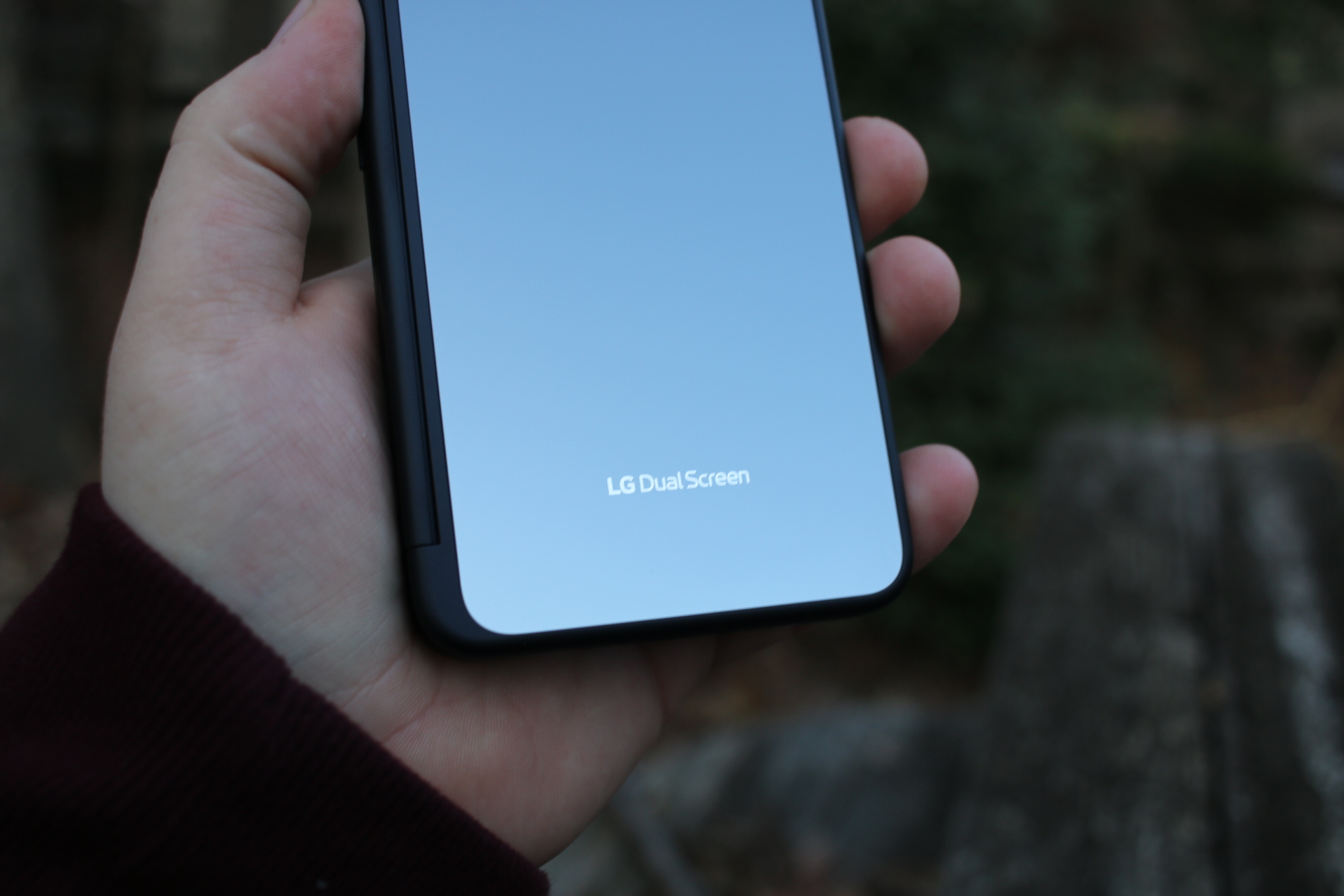 Throughout the years, we’ve seen many so-called revolutionary features added to cell phones. Some that stand out to me are high density and high refresh displays, massive batteries, and cameras that make you really question whether a picture you’re looking at was taken with a phone or a DSLR.

In that time we’ve also seen a lot of gimmicky features come along that don’t last very long. There are too many to list here but we’ve all had a phone with an amazing new feature that was supposed to revolutionize how we live our lives. Yet, somehow we never use that feature beyond the first week or two.

Looking at the current trend, I think it’s pretty obvious where our little pocket computers are headed right now. Foldable phones are the new and exciting stuff, and despite their astronomical price tag, it seems that the mobile industry is convinced this is what customers want. So far we’ve already seen offerings from Royole, Huawei, Samsung, and Motorola.

All of these phones, in one form factor or another, has a body that folds out to reveal a larger screen. The mechanisms to get there have all been different, but that’s the overall defining characteristic right now.

One company is doing something similar in the space and flying under the radar. You might have heard of them before: LG.

LG’s folding phones are completely unique as compared to the others on the market because, instead of building one device that unfolds, it gives users the option to attach a separate case that adds the second screen.

To be fair, this has both its advantages and disadvantages. We’ve spent some time with both the LG V50 5G and the LG 8x and are happy to bring your our thoughts.

I’ve been told you get used to it. I work with a guy who owns the Fold and he doesn’t seem to mind. Other reviewers say that after a few days, they don’t even see or feel the crease anymore. And hey, that’s great, but I don’t know if that’s something I, or most normal consumers, would want to deal with. When first impressions are everything, this leaves a bad taste in a person’s mouth.

LG gets around this by not having a folding screen at all. While there is a gap between the two screens, they still work together pretty flawlessly. I don’t doubt that people start to gloss over the crease in their screens because I gloss over the big black hinge on the V50 5G and the 8x pretty quickly. It’s not going to be for everyone, but I certainly don’t mind it. 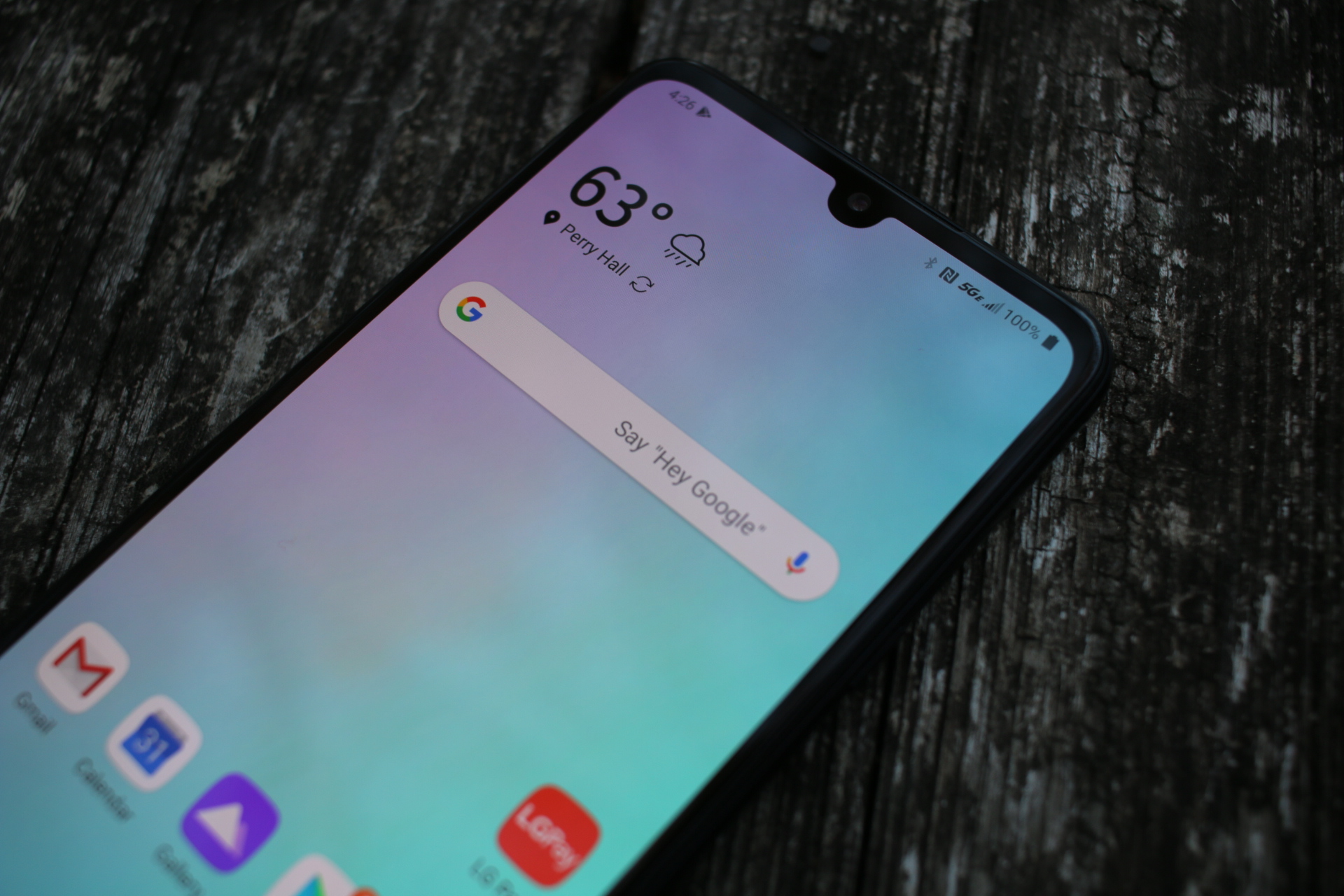 One of the best things about using a case for a second screen is that when I don’t want a second screen, I can take the case off and use the phone normally. I did this for the entirety of my time with these devices.

Most of the time, I only want a regular phone. When I’m walking down a busy street using Google Maps, I don’t want a huge phone that’s hard to handle. I don’t want a bulky device that’s easy to drop and break. I take the case off and throw it in my pocket or my bag. Since it’s about the width of the device, I don’t notice it any more than if I just had the phone in my pocket.

To be completely honest, I used the phones without the second screen most of the time. So, instead of throwing it in my bag or my pocket, it’s more like I was grabbing it from my bag when I actually wanted to use it. That feels pretty damn great and increases the functionality of the phone.

If I’m sitting at home on the couch and want to play a game, I can throw it on there and watch some YouTube while I play or have a dedicated gamepad. It’s great.

Let’s be honest, phones are too expensive right now. That goes doubly so for foldable phones. They’re all over $1,000 with some are reaching a  price where you have to choose between it or a pretty good gaming laptop. For some it’s a year’s worth of lease payments on a car. That’s kind of crazy.

LG wins here because you’re just paying for the phone and essentially getting the second screen case for free. LG advises that for its new LG V60 5G it will add in the case for free.

The 8x and V50 are cheap enough that adding the second screen case isn’t going to push it close to the price of those other premium phones. Hopefully, LG drops the prices even further now that the V60 5G is on the way. Then, you can get a hell of a deal on a phone with a ton of screen real estate. 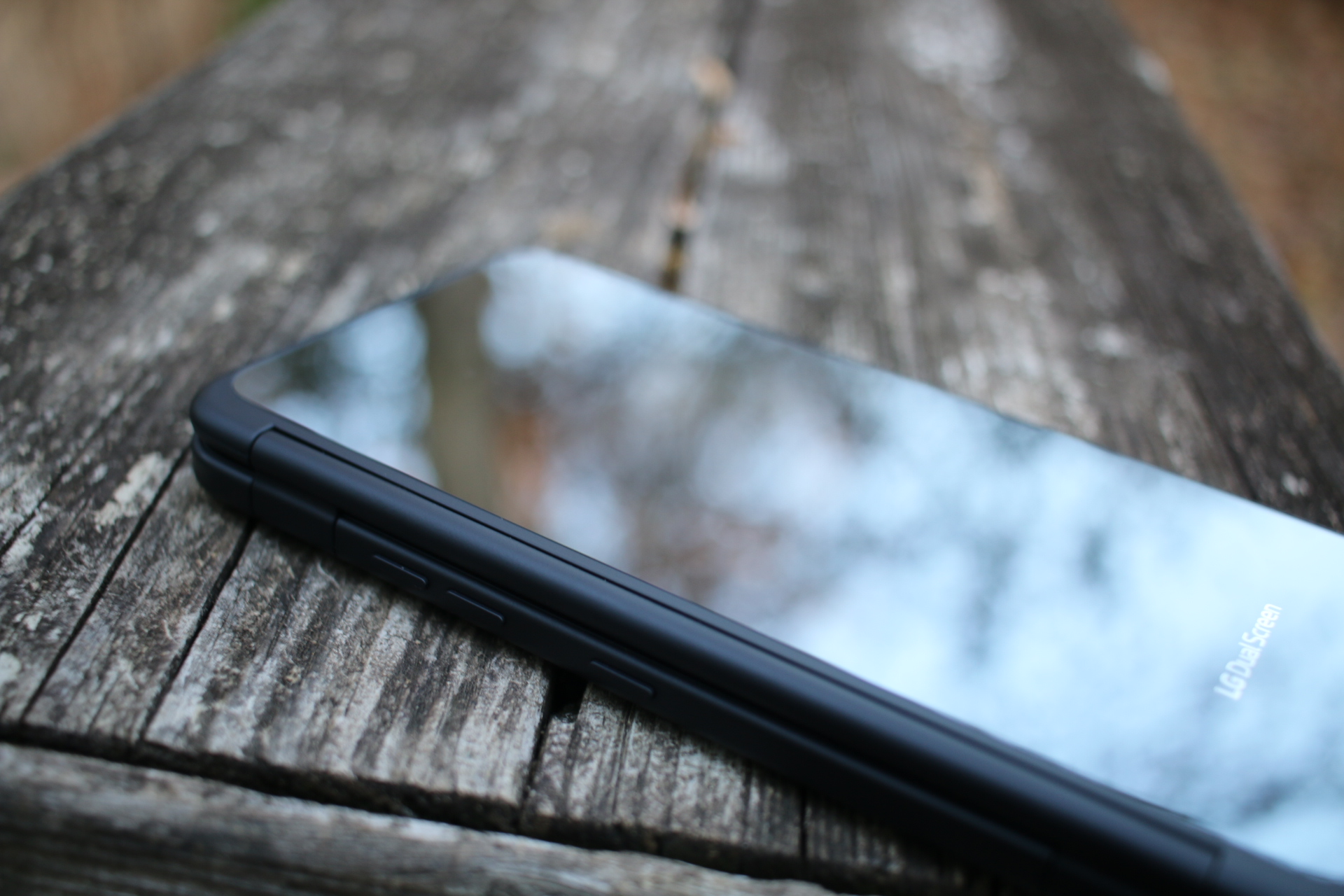 This can be an advantage and a disadvantage based on how you look at it. As I mentioned earlier, I take off the case when I’m not using it and it’s just a regular phone. But, if you want to keep the case on at all times, which I wouldn’t blame you for, this phone can feel pretty bulky.

With the case on, the phone is 2-3x the thickness of a regular device. That can get pretty annoying to deal with on a day to day basis, especially since we’re used to phones getting thinner all the time.

If you’re looking for a slim folding phone, your choices are essentially non-existent. All of the options on the market look pretty bulky when closed, but that’s where we are with the technology. But LG definitely take the case with just how big this thing is with the case on it. 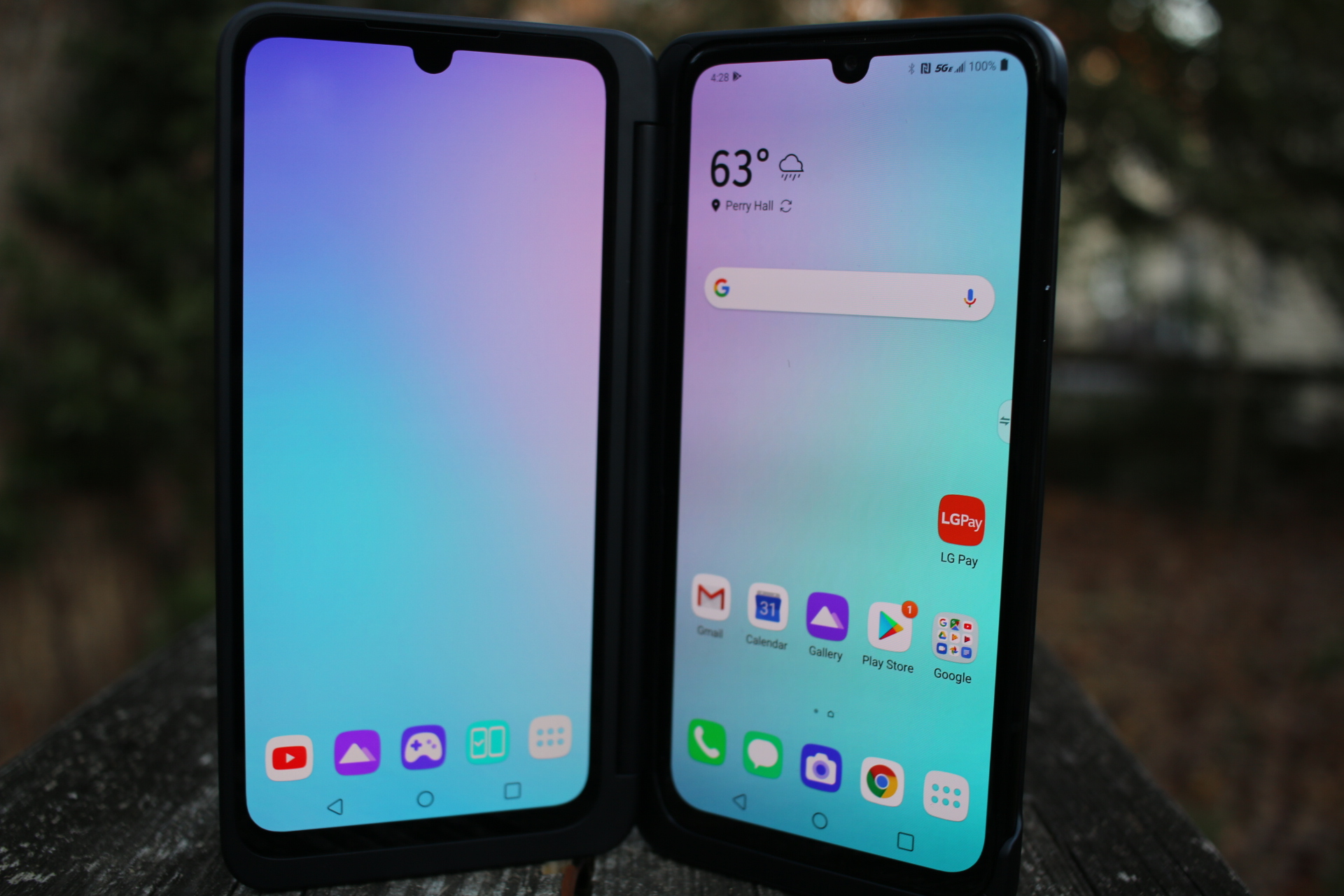 Even though there’s no crease in the middle of the phone’s screen, there is dead space where the hinge in the case resides. It’s not much, I’d say less than half an inch, but if you’re bothered by such things, this definitely isn’t the phone for you.

The dead space goes beyond just the hinge, though. For some reason, LG decided to make the front of the case glass, but not a display. If feels like there should be a third screen here, but there’s just a small banner display that shows the time and some other stats like battery life.

It’s a frustrating decision because there could’ve been so much usability here and LG just blew it. I’m guessing this was either a cost issue or a technical hurdle they couldn’t clear, but I’m hoping it changes in the future.

Typing with the case on

Everyone is used to typing on a smartphone now and most can do it one-handed. But with the case on this phone, look out because it’s not a fun time.

You have to hold the phone differently because there’s a 6-inch screen now hanging to the left. You can’t easily balance the device to type one-handed so you have to use two hands. And even with two hands, it can be an adventure with the case on.

It’s hard to reach in from the left because of the second screen and the balancing act you have to play with your right hand makes it hard to accurately press the screen where you want.

The saving grace is that in some circumstances you can use the screen as a dedicated keyboard and turn the phone horizontally. This reminds me of the first Android devices to hit the market that had dedicated physical keyboards. It’s not the same and it is still hard to re-learn that muscle memory, but it can be done if you’re into it. 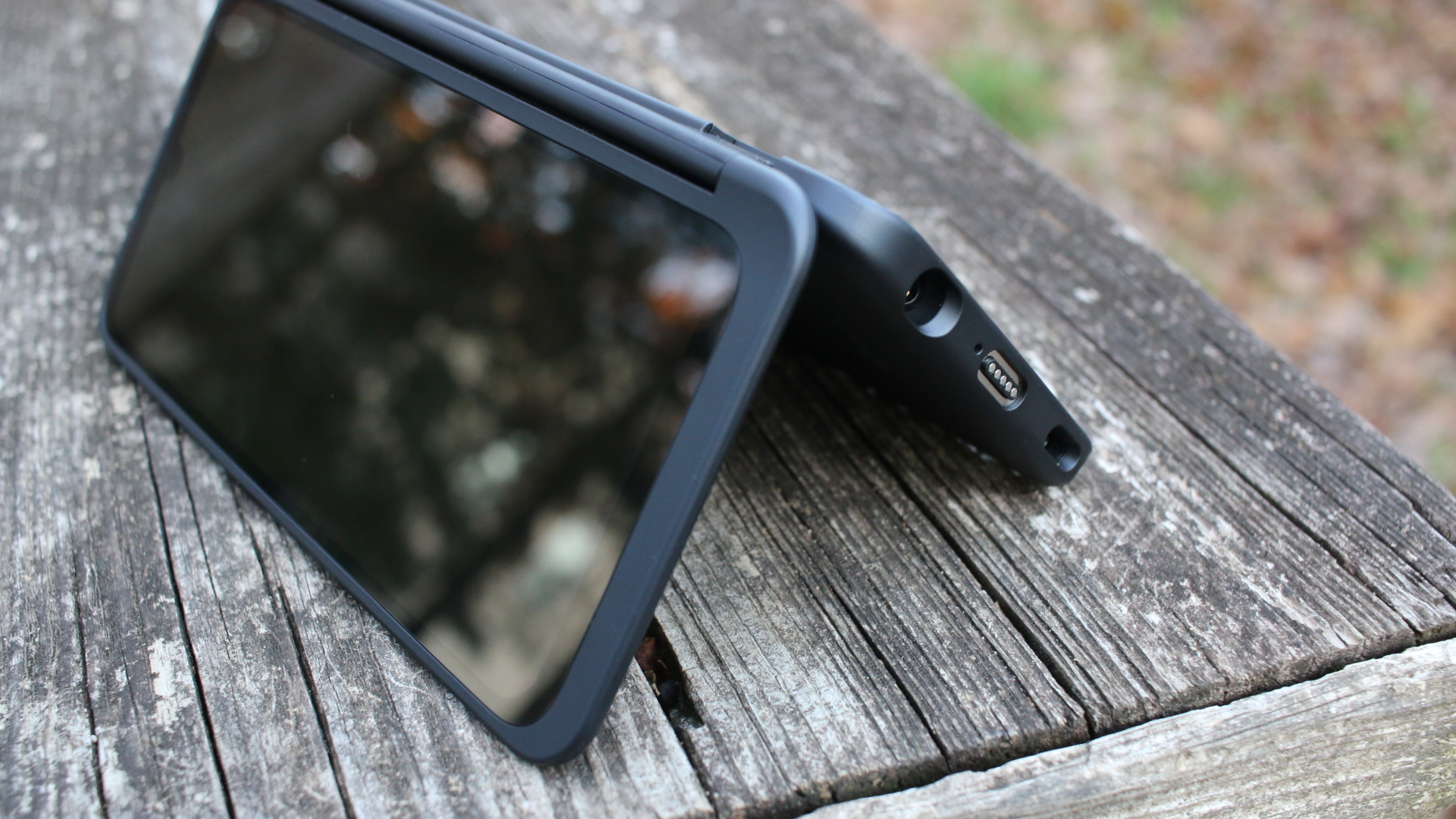 I certainly wouldn’t blame anyone for immediately dismissing LG devices and the secondary display. It took me a while to really get used to using the second screen and I think there’s a bit of a learning curve here that most people don’t want to bother with.

But, once I got into using the devices to their full potential, they were hard to put down. LG has always made solid devices that are generally worth the money. And the great thing about LG is that if you wait a few months, you can pay far less than the initial asking price. But adding the second screen case is a big advantage to pulling in customers that wouldn’t normally consider an LG device.

There are certainly disadvantages, but having the second screen is really great. To me it’s even better that it’s optional. Android is all about using your device the way you want it and LG definitely let’s you do that here.

With the other foldable phones, you’re stuck with what you’ve got. And sure, those are great phones, but if the hinge breaks or the screen starts to go from the stress of being folded repeatedly, you’re out of luck. If the second screen case breaks, you just buy a new case.

All-in-all, I think LG has a winning formula here, but I do wonder how well it’ll translate with customers. There’s a lot of educating that needs to be done about just how to use the second screen case and what it’s capable of.

As of the time of this writing, I can’t remember a single LG commercial that focuses on this and my trips to the T-Mobile store have yet to lead to any conversations about it either.

LG, you’ve got a great idea here. Now tell people about it before you get left in the dust. Again.