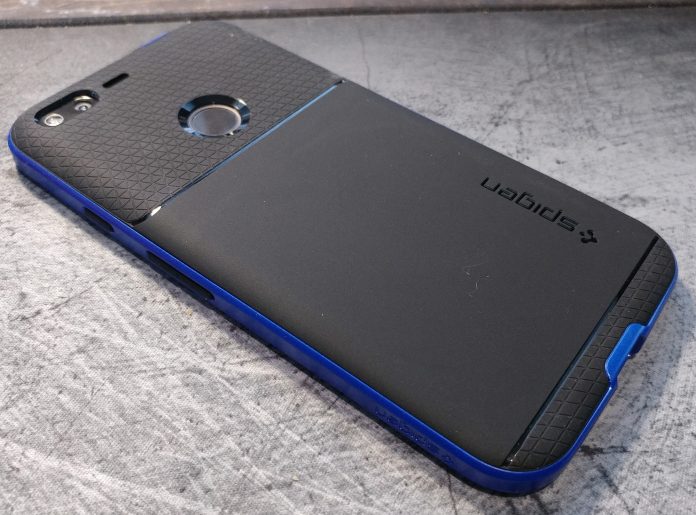 The brand new Google Pixel XL is out and the metal and glass build needs to be protected! Spigen is one of the biggest names in cell phone accessories because it makes some great cases for an affordable price. We’ve featured Spigen several times in our accessory guides and fans always tell us that they love them. We’ve teamed up with Spigen for this look at its lineup for the Google Pixel XL. Take a look. 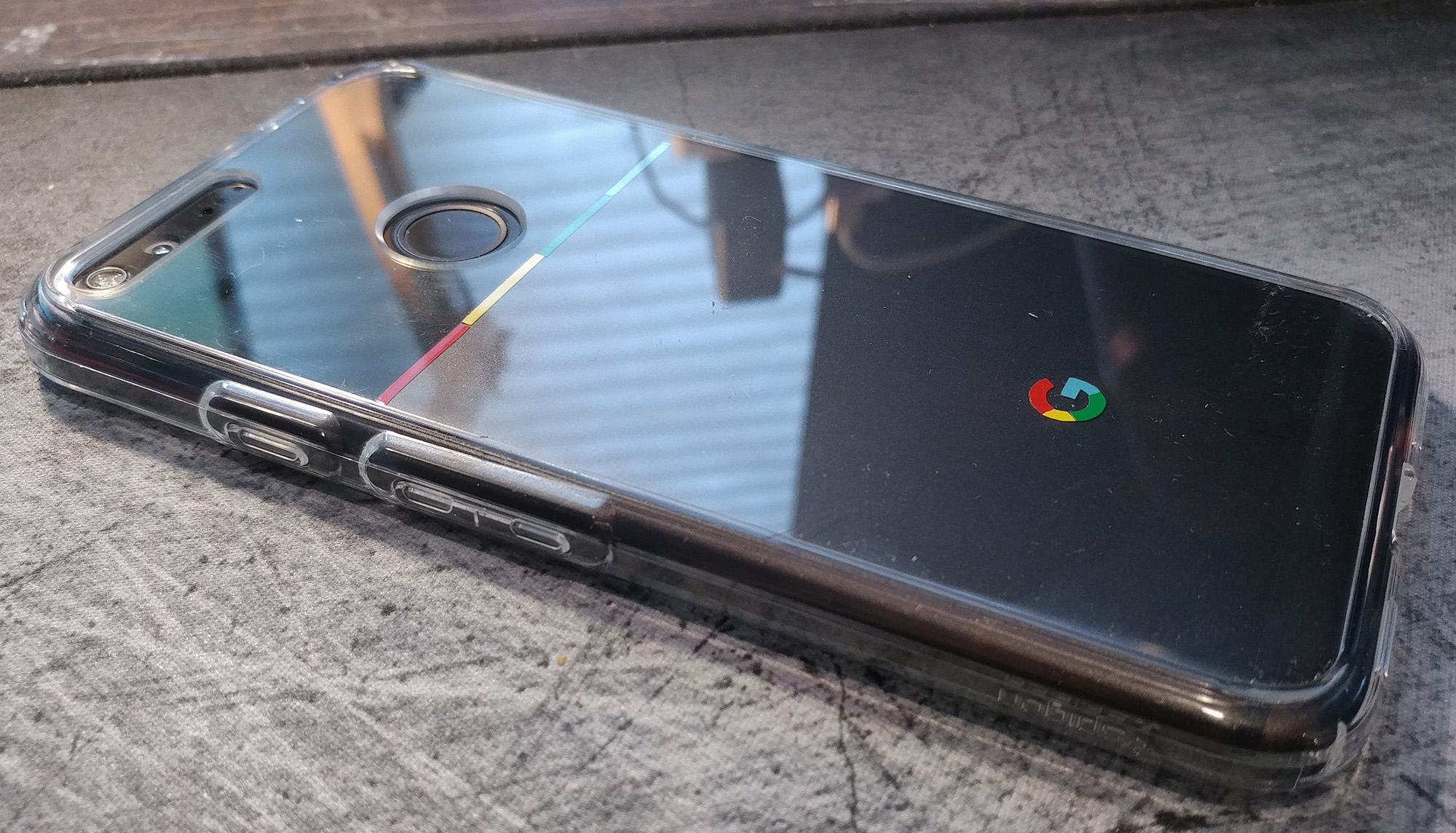 The Crystal Shell case is a really nice option if you want to show off the aesthetics of your Pixel. The clear case gives you full view of your phone. Some have dissed the looks of the Pixel XL, but I personally like it a lot so the Crystal Shell scores high marks for me. The corners have extra large bumpers to help shield the phone from falls, but it does add the tiniest bit of bulk. Most people won’t mind it too much, but if you like your phone as sleek as possible, you may want to find another case.

Not to be confused with the Crystal Shell, the Liquid Crystal is one of the lower profile cases in Spigen’s lineup. This one won’t do much for you in case of falls due to its thin construction, but it will protect the back from scratches and dents and added some much-needed slip protection to an otherwise slippery phone. This is the case I keep on my phone most due to the fact that it is clear and it helps me hold onto my phone. I’ve found that I don’t need that much impact protection if I know my phone isn’t going anywhere. 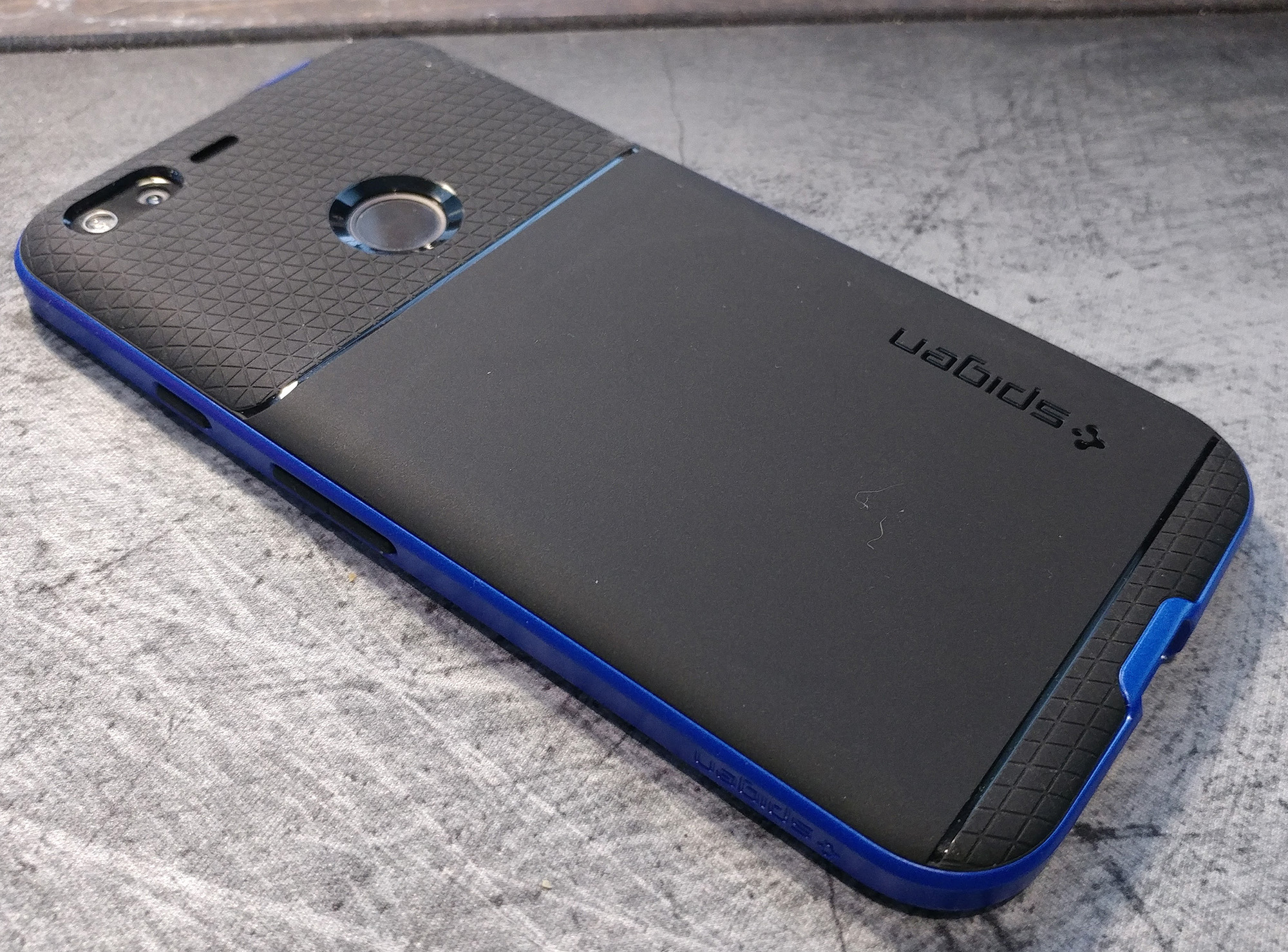 The Neo Hybrid is one of the most popular Spigen cases and it’s easy to see why. The case protects the phone with a soft case and a hard bumper to absorb those falls and looks good doing it. Spigen sent over the case with a blue accent and I think it looks great. One of the really nice things about the Neo Hybrid is that you never have to worry about wiping off smudges or fingerprints. Some small dirt can get stuck in the pattern at the top, but it’s normally pretty easily dealt with. 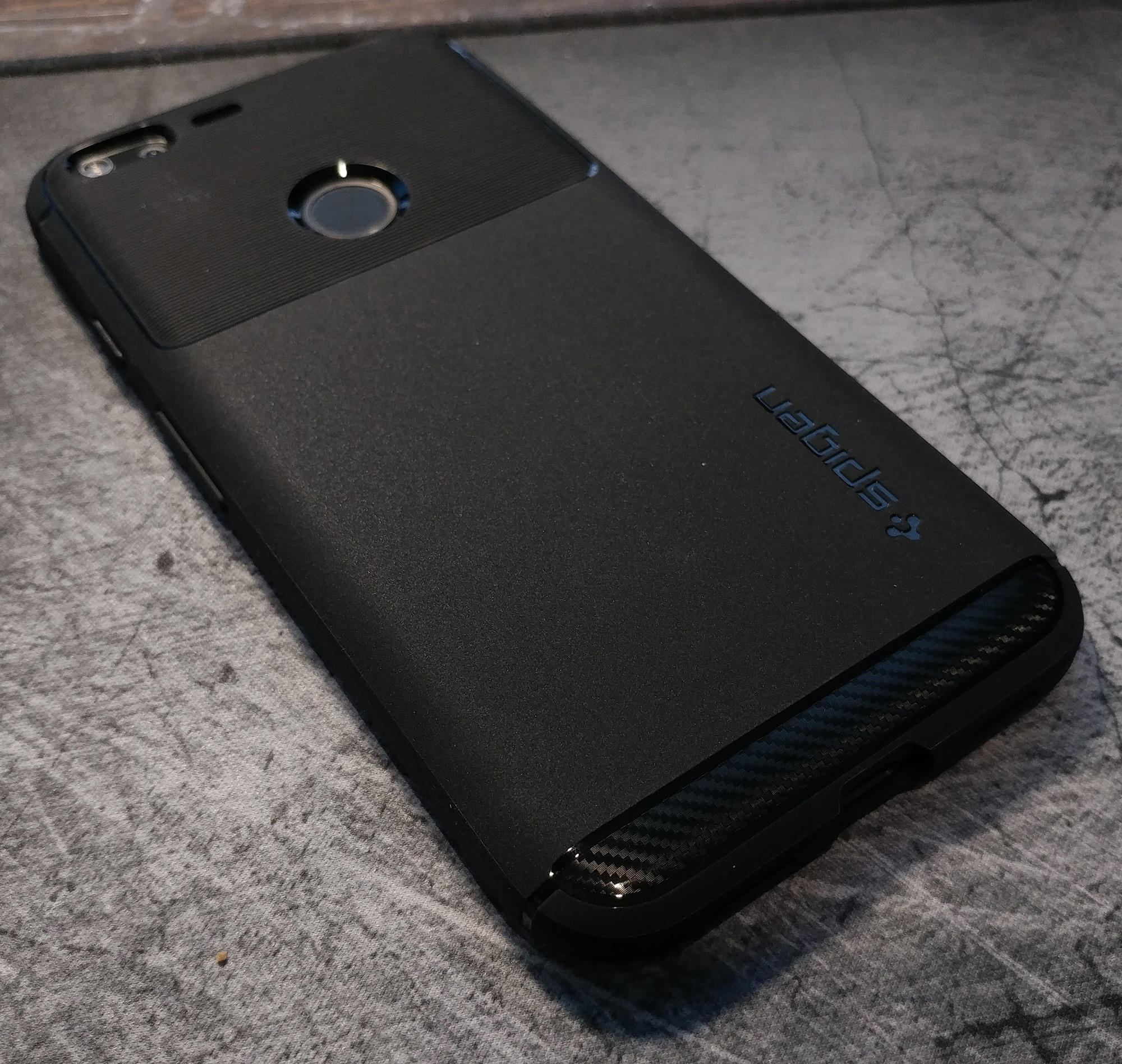 The Rugged Armor is the case I see the most in the wild. People really love the case for its slim design and smooth feel. You still get the added grip that you would expect from a case, but the Rugged Armor feels great in the hand too. Nothing will beat the industrial design of a phone for me, but I do love the looks of the Rugged Armor as much as any case I’ve ever seen. You will get some impact protection from the Rugged Armor, but don’t let the name fool you- if you want serious OtterBox-like construction, you may have to look elsewhere. 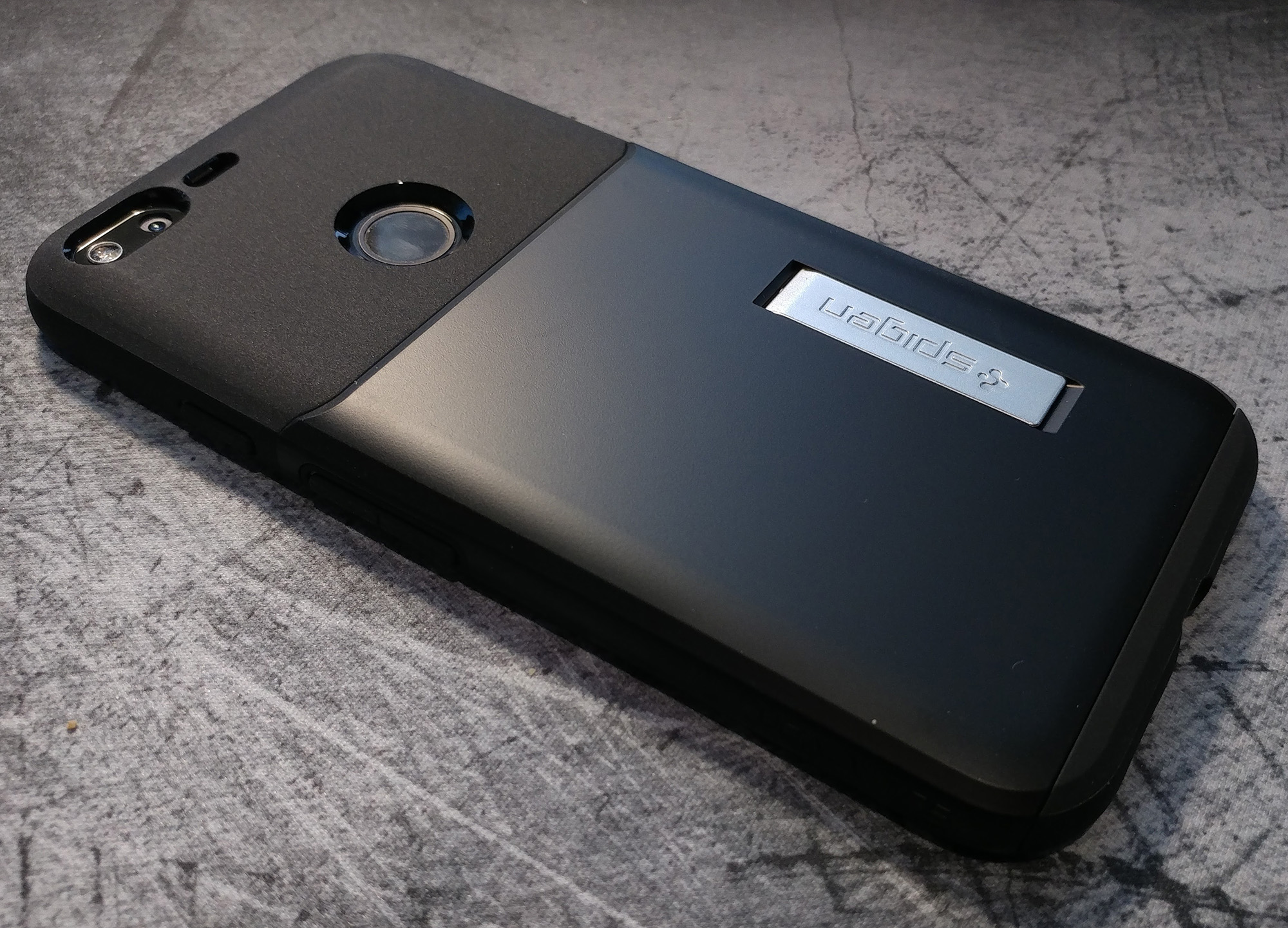 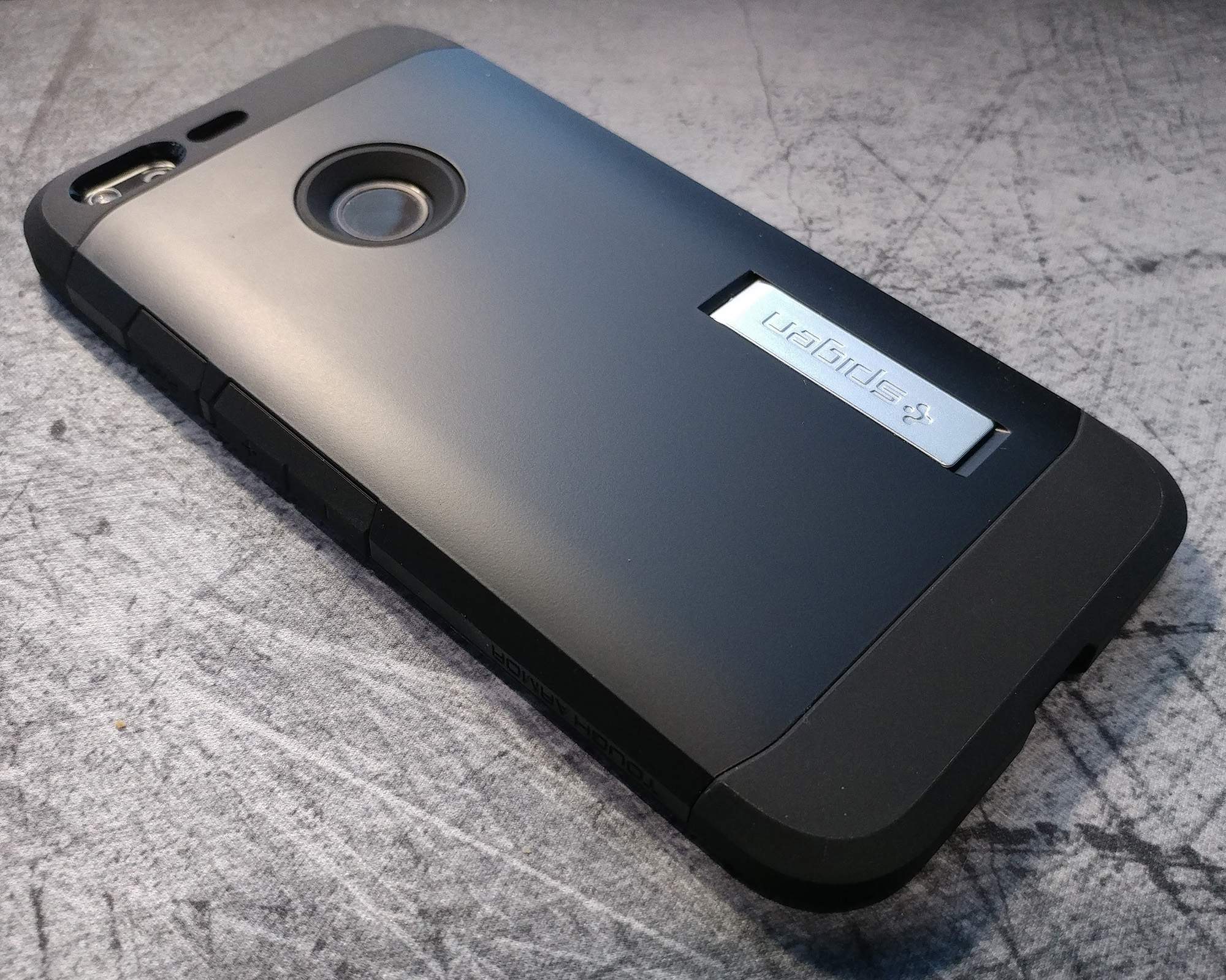 Now THIS is the bad boy of protection in Spigen’s lineup. This thing eats at the same table as the OtterBox Defender lineup and does it for about half the price. I love how big and bulky this thing is because I know my phone is safe inside. If I were walking around downtown doing touristy things and taking a bunch of pictures and using maps for walking directions, this is the case I’d use. If my phone is going to be in and out of wherever I’m keeping it, I want the protection in case of falls.

The Tough Armor also comes with a kickstand so you can turn your phone to the side and watch media without using any hands to hold it up. Like I said, this thing is big and bulky so if that’s not your thing, pass on this one. But, if you want serious protection, check the Tough Armor out. 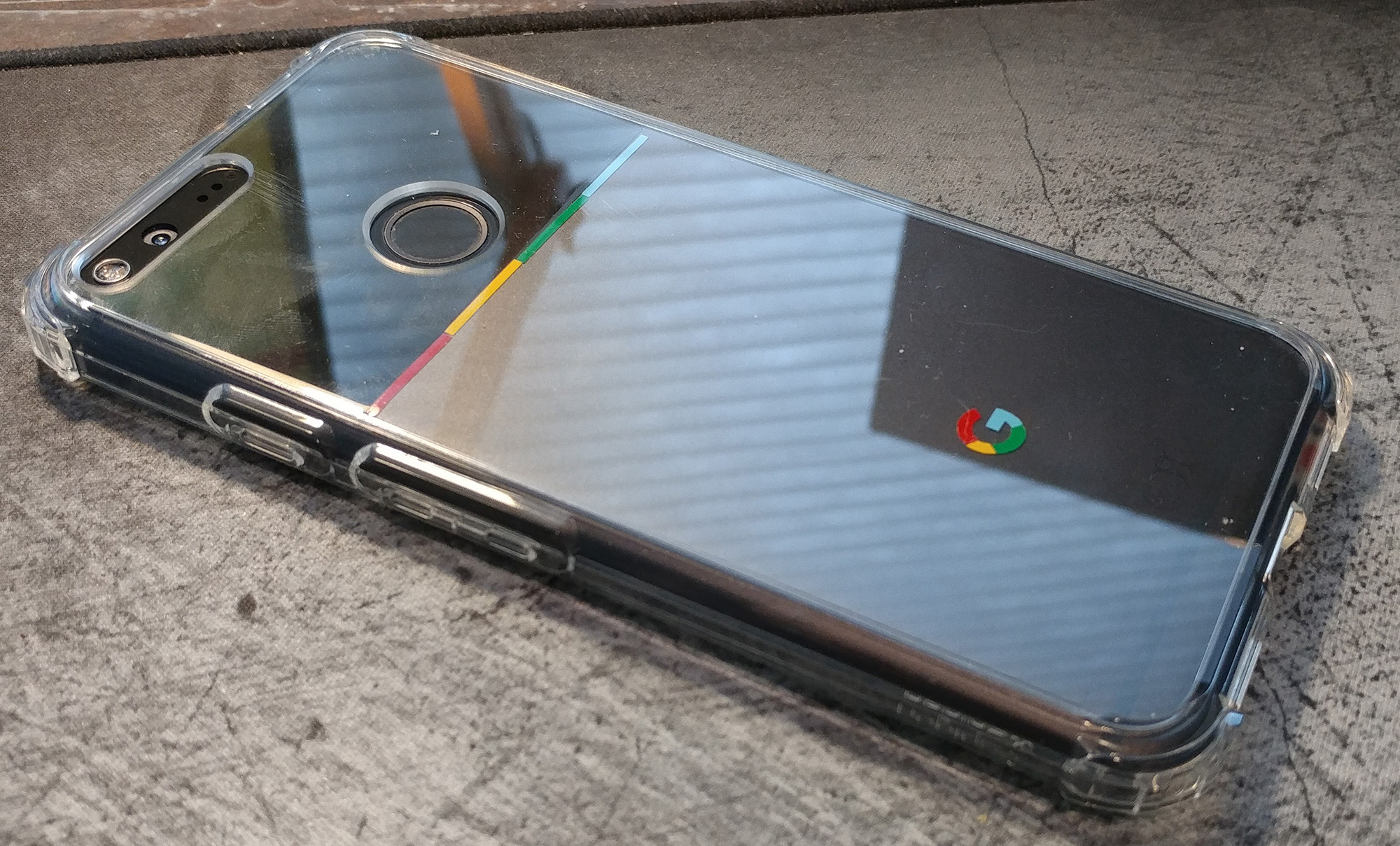 The Ultra Hybrid is a happy medium between the bulky protection of the Crystal Shell and the more flimsy Liquid Crystal. The Ultra Hybrid is another clear case, but this one has a sturdy Polycarbonate back to give it a little more strength while retaining the TPU bumpers that feel a little more pliable. I like the compromise here because my phone feels pretty secure in the case and it adds the grippy sides I like too. The bulk is about the same as the Liquid Crystal so it feels slim and light too.

How to migrate your data to a Pixel phone