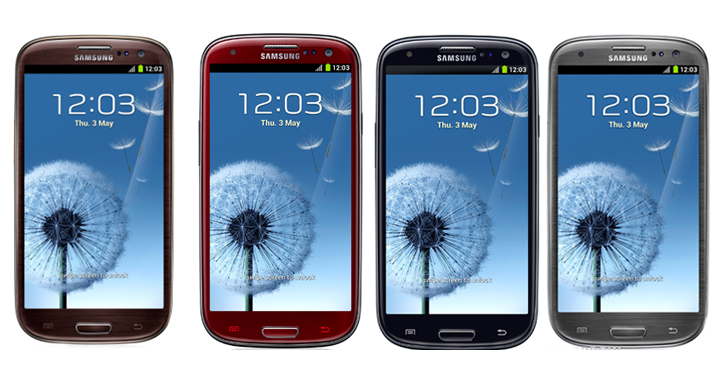 Samsung today announced that there will be four new color options for the flagship, the Galaxy S III. If you were not a fan of the Marble White or Pebble Blue then perhaps you’ll appreciate the new stuff.  Of course, it’s not as easy or convenient as it would appear – things depend on carriers and markets.  You might be limited by what your respective provider has in store.

Nevertheless, the four new colors for the Galaxy S III are Amber Brown, Garnet Red, Sapphire Black and Titanium Grey.  Here’s a picture of each option as well as a brief description.

Amber Brown*: Inspired by the mysterious and unique gem, which was believed to sustain the secrets of the earth inside it. The deep, rich colour of Amber Brown redefines the classic colour and emphasizes the beauty of the advanced organic design of the GALAXY S III.

Garnet Red*: Rare and special, the gemstone Almandite Garnet was worn as an amulet by the ancient Egyptians who believed the stone contained protective powers. Garnet Red holds the delicateness and elegance of Almandite Garnet, in line with the GALAXY S III’s soft curves and smooth lines.

Sapphire Black*: A colour that adds the mysterious power of dark stones to the refined, deep sophistication of the colour black, Sapphire Black is inspired by the stones used by the ancient people of India and Persia for protection, with the belief they strengthened one’s willpower.

Titanium Grey*: Inspired by the colour grey as a symbol for intelligence, insight and curiosity, all of which are embodied within the design of the GALAXY S III. Titanium Grey expresses the feeling of modernity and wisdom bringing a futuristic element to the handset.