We recently posted our in-depth review of the Samsung Galaxy S7 Edge and I definitely came away impressed by the device. Even though it has some serious drawbacks (TouchWiz), the device itself is absolutely wonderful. Every time a co-worker or friend picked up the phone, they remarked how cool the curved display of the phone is.

And it definitely is. Until you actually want to do more than just look at it.

The actions you can perform with the curved display are frankly just redundant. There’s nothing you couldn’t do in a tap or two so it isn’t saving you time. You also have to remember what you have set up since it isn’t visible like home screen icons and learn you have to learn new mechanic to get to these shortcuts.

There are currently two different types of screens that Samsung offers exclusively with the Samsung Galaxy S7 Edge: Edge Panels and Edge Feeds (we’re going to ignore the gimmicky Edge lighting since no-one in their right mind lays their phone flat on the screen).

Edge Panels is probably the one you’ve seen the most of. When the screen is on, you can swipe in from the right to display one of the several panels that have icons or sports scores. These icons can be app shortcuts, contact, stock scores, a compass, the weather forecast or more. Four come turned on by default, Apps Edge, Tasks Edge, People Edge, and Yahoo News.

Apps edge in theory sounds great. This lets you “access your most frequently used apps quickly via the Edge screen.” This is a redundant feature done in a more confusing way. We have launchers. In fact, you can download a third-party launcher if you don’t like the one that comes on your phone. With these launchers, you place apps on your home screen, you tap them, an app opens. Why would I want to hide them and have to remember the icons I’ve placed in there?

Tasks edge offers a little more functionality but still has fatal flaws. The main idea behind Tasks edge is that you can set shortcuts to perform certain actions, rather than just opening an app. Samsung gives you four examples to get you started: Create contact, Take a selfie, Timer, Create event/task.

There is room for six more options to be added, but when you hit the plus icon to add another you’re greeted with a paltry list of actions you probably would never use anyway. I don’t know of anyone who needs an icon to invite people to your live broadcast using Samsung’s streaming feature. Does anyone actually use Samsung’s live streaming feature anyway? Again, there is a lot of redundant functionality here that could better be accomplished with Google Now voice commands. It’s much more convenient to start a time through Google Now than Tasks edge.

By default, People edge is going to be populated by your favorites (if you have any) from your Google contacts. With a swipe and a tap you’re taken to a screen with three icons, call text, or email. Aesthetically, this may be the most pleasing option of the bunch. I love the blurry background with the contact photo and options display up front and center. It’s a great effect. But is it more convenient than opening my SMS app or dialer and hitting the favorites tab? Is it more convenient than telling Google Now to call my wife? Nope. 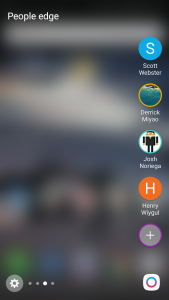 Yahoo News delivers three headlines with a headline picture. If you actually wanted to know what was going on in the world, you’d already have an app or a favorite news website on your phone that gave you better and more headlines. 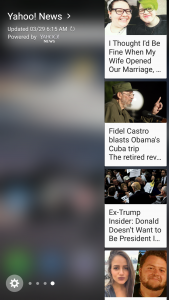 Edge feeds are a bit of a different animal. These feeds turn on when the screen is off and display only on the curved part of the screen. These are a generally black background and white text layout that display things like stock scores, fitness info, sports scores, headlines and missed calls and texts.

To activate Edge feeds you must swipe along the curved edge, as opposed to swiping across is for Edge panels. It’s a weird mechanic that I never really enjoyed. I suppose these are good for a quick check every once in a while, but I still feel like they don’t offer a better way of getting this information than we already have. 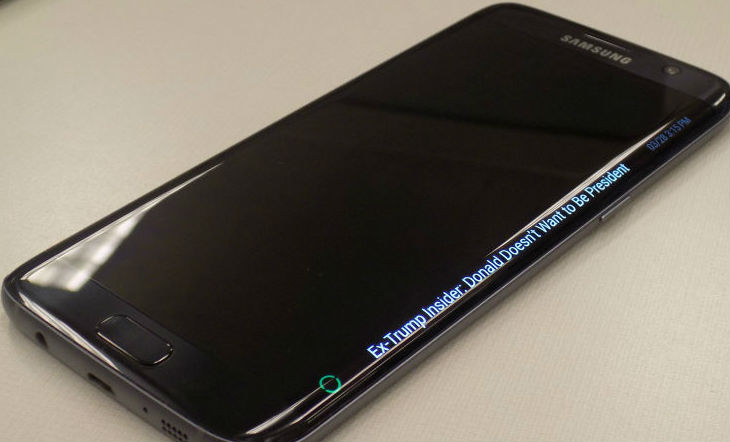 I’m not going to continue bashing on Samsung here. I think you get the point. This phone is absolutely beautiful in large part due to the curved edge, but I think that’s where the value ends. Samsung offers nothing in software to make my life any easier by using it. In fact, when I did try to use these features I just got frustrated and quit using them after a while. There are will be some people who swear by these features and call me crazy, but I can’t see the point in them right now.