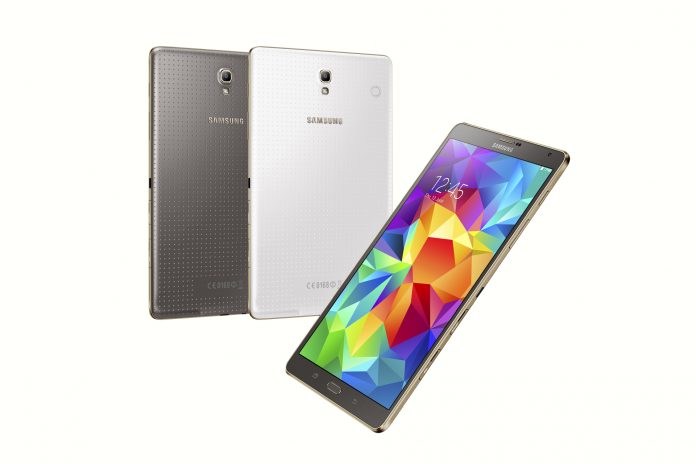 Back in July of 2014, Samsung released the Galaxy Tab S to compete directly with the iPad and iPad mini. With comparably sized screens at higher resolutions, more RAM, upgradeable storage, and unique features, Samsung was set to take Apple’s iPad line head on. Although the Tab S never quite reached the sales levels of the ever-popular iPad tablets, they are still some of the best tablets available today.

The Samsung Galaxy Tab S still has one of the nicest screens you can find on a tablet. The SUPER AMOLED screen can refresh as much as 1000 times faster than a traditional LCD panel. AMOLED screens are also known for high-contrast levels as well as rich color reproduction and deep blacks. The Tab S also includes preset color adjustments if you don’t particularly care for the oversaturated look of AMOLED screens.

Another great thing about the SUPER AMOLED screen on the Galaxy Tab S is the superior viewing angles, which is great for sharing media or photos with those around you. The Galaxy Tab S is essentially the only major tablet with an AMOLED screen from its time and also has one of the highest screen-to-body ratios of any tablet, at over 76%.

Also impressive for its time, the Tab S has an astounding 1600×2560 resolution and a PPI rating that’s still the best-in-class for tablets at 359 pixels per inch (for the 8.4″ variant). This high resolution and high PPI is not even available on Samsung’s newer flagship tablets. For some reason, Samsung shied away from the 16×9 resolution in its newer tablets to opt for the 4×3 aspect ratio that’s more common with Apple’s iPad. I find the original Galaxy Tab’s resolution and aspect ratio to be much better for games, electronic books and video, which is why I prefer the Tab S over the Tab S2 or S3.

Light as a feather

Samsung did a wonderful job implementing smart technologies into the Galaxy Tab S that allow the tablet to be extremely lightweight. Although newer iterations have built on these technologies, I was incredibly impressed by how light the Tab S felt the first time I picked it up, three years ago. At only 294g, the Tab S is still lighter than the Apple iPad Mini 4 and still thinner than the newer Samsung Galaxy Tab A at only 6.6mm.

Samsung seemed to have focused on being lightweight by choosing to go with a 4900mAh battery instead of something larger like what its competitors were offering at the time. Fortunately, the Tab S performs quite well considering the size of the battery (having that AMOLED screen is a bonus here) paired with the resolution and processing power of Samsung’s tablet. Personally, I’ve rarely encountered an instance where battery life was an issue, even during lengthy, processor intensive gaming sessions.

It’s all about the specs and features

Samsung’s Galaxy Tab S features expandable memory, a fingerprint scanner as well as an MHL AV port for direct video and audio over HDMI, with a compatible adapter. Also unique to Samsung Tabs of the time–an IR blaster that allows the Tab S the ability to control multimedia devices within your home.

The Tab S features Knox security as well as an accurate fingerprint reader for added security. You also get a split-screen view with Multi-Window, which allows you to use two applications at once. Want to check email while you continue to watch a YouTube video? Samsung’s Tab S series was one of the first devices to allow such capabilities. Do you currently use a Samsung phone? Turn on SideSync so you can view and control your smartphone without even picking it up. The features are packed to the brim!

Although the Tab S is a few years old now, it still has a ton of use and is plenty capable as a primary tablet. However, if you’ve recently upgraded with a new tablet, you could use a Samsung Tab S as a secondary tablet in a multitude of ways.

Need a home security camera? Set a Tab S up in your kitchen or living room, plug it in and use an app like Manything or Alfred to record videos for extra security or to keep an eye on midnight snackers. Need a universal remote in the TV room or living room? The Galaxy Tab S has an IR blaster so you can control multiple entertainment components from one device. Do you like to sit in your bedroom and write fictional stories in your free time? Pair the Tab S with a Bluetooth keyboard and HDMI/MHL compatible monitor to make for a simple author’s desk that is both cheap and portable.

Having a tablet like the Galaxy Tab S provides for a wide variety of interesting capabilities. It’s not just a tablet to play a couple games and browse the web for a while (although it is fine for that too). It really is a device that allows you to do so much more. Gaming, browsing, streaming, creating, writing, blogging or vlogging–the possibilities are extraordinary.

While the Tab S continues to age, it still stacks up fairly nicely against some newer tablets. Apple, Samsung, Google, ASUS, and Microsoft continue to sell tablets today with different specifications and of course, at different prices. However, Samsung still continues to offer the best Android tablet in the marketplace and really set the bar high with the Tab S in 2014.

The Tab S can still roll with the best of them. Its smart design and future-ready internals have made it extremely versatile and functional. Over the past three years, I’ve never felt like my Tab S 8.4 has been incapable of doing something that I’ve wanted to get done. I have yet to see a tablet that I’ve really wanted to upgrade to over the Tab S. I honestly feel as though my Galaxy Tab S is plenty capable, even today.

Although the Samsung Galaxy Tab S is a great tablet, it is not without its shortcomings. In the span of three years, technology has advanced immensely, which means the Tab S is not the most powerful nor the most robust tablet anymore. As designs evolve, things from years’ past can seem somewhat basic or outdated. This is the unfortunate inevitability of technology in general.

Like most tablets, the cameras on the Galaxy Tab S are far from great. Cameras on tablets generally are not used for taking high-end photos, to begin with, but the sensors on the Tab S are close to what you could find on a budget device today. While most people would opt for a different device to take photos, the Tab S can still snap a quick photo when necessary or even allow for streaming video.

Another downside of Samsung’s tablets (and its phones for this matter) is the inclusion of the highly divisive Touchwiz OS overlay. Although the version of Touchwiz that’s included on the Galaxy Tab S is not too overbearing, most Android users have found stock Android operating systems to be much more effective as well as efficient. The biggest drawback of the Tab S with its interface today is that it looks and feels slightly dated. It’s still very functional, but the styling of fonts, color, and layout design are rudimentary when compared to the phones and tablets of today.

Built for the future

Samsung really designed the Galaxy Tab S to last for a long time. With high-quality build materials, amazing specifications and a host of unique accessories, the Tab S is almost too future-proof. I say this only because the high-end capabilities of this tablet has made it more difficult for Samsung to sell iterative versions of its tablets. Unlike a smartphone, tablets are generally used less frequently, which has made upgrading the device a lot less likely.

Personally, I am very happy that I purchased my Tab S when I did. I’ve used my Galaxy Tab S 8.4 at home and at multiple jobs for gaming, media consumption, work-related tasks, creative projects and more. Since the release of the Tab S, I have yet to see another device in this price range that has made want to upgrade.

Going forward I feel that the original Tab S is one of the greatest tablets ever designed. I imagine that my family and I will continue to use the Tab S 8.4 for years to come, as long as the hardware components hold up. There are so many capabilities packed into this little electronic slab that has made my life more enjoyable as well as much more productive.