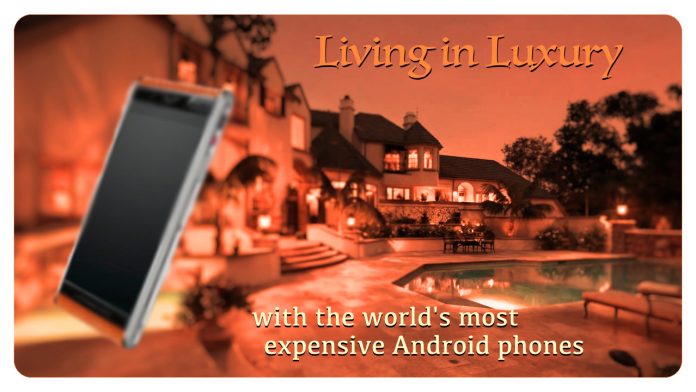 Most people look at the price of a new smartphone and think, “can I really afford this right now?” What if you didn’t have to worry about the cost of your next upgrade?

While many of us have become accustomed to paying off a device over time with installment billing or a discounted rate through a contract, we rarely consider the actual cost of some of the newest devices. But what if price wasn’t an issue?

What if you had all the money you would ever need and you wanted something extra fancy? Would you then consider a luxury phone that could cost you thousands upon thousand of dollars? Let’s take a look at some of the most expensive and most luxurious Android phones you can buy.

The resale value would remain high on some luxury phones for the materials alone but with the way technology advances, the actual devices are fairly useless in a short amount of time.

The first offerings come from luxury “mobile communications instruments” company, Vertu. Vertu is a British manufacturer originally started by Nokia back in 1998, now owned by Godin Holdings of Hong Kong.

Made in England with the utmost attention to detail and offering various models with sapphire cut keys, real alligator skin or genuine leather as well as diamonds and gold normally found in the most expensive of jewelry–Vertu is luxury.

Let’s take a closer look at some devices that Vertu is currently featuring and selling on its website.

This smartphone has a familiar form factor with a touch of elegance found around every corner. You can see Android version 5.1 running on the 5.2-inch 1080p touchscreen. This phone also features a Qualcomm Snapdragon 810 Octa-Core processor, a 21MP camera with dual tone flash, 64GB of internal storage and 4GB of system memory. So needless to say, this phone is no slouch when it comes to internals.

Similar to the Vertu Signature Touch Sky Blue edition, but with a touch of Bentley Motors and a more debonair personality, this luxury phone speaks to a very particular demographic.

Vertu allows for customization of leather and stitching color options as well as a 24-hour dedicated Concierge service accessible from the home screen. Under the hood, we see the same internals as the other Vertu Signature Touch smartphones, which includes Bluetooth 4.0, NFC and Dual-band WLAN 802.11ac. Don’t be surprised if you see a certain double-o agent carrying this phone during his next adventure.

Gresso is another luxury smartphone maker, founded in 1999 and registered in Switzerland. Many of its phones include exotic leathers, 18K gold and PVD-coating similar to what is used in the most expensive Swiss watches. Gresso offers a complete line of hand-crafted smartphones that start around $3,000 USD and only go up from there.

The Gresso Regal GOLD is unique, yet classy–bold, yet familiar. Full specifications are very similar to a Samsung Galaxy S4, but the craftsmanship looks immaculate. This phone features a 1080p Gorilla Glass panel at 5 inches, 32GB of internal storage and 2GB of main memory.

The Gresso Regal line arrives inside a high-quality leather, hinged, gift box that includes a certificate of authenticity, charger and user manual–something that your next Galaxy phone probably won’t have.

Gresso also offers the Regal R2 as pictured above with white gold and the familiar titanium body. Internally we see the same chips found in the GOLD, R1 and R3, the latter of which have slightly different features. Each phone is manually polished for that luxurious look and feel that few other smartphones offer.

Sirin Labs is relatively new to the smartphone market but focuses on security and privacy with their exquisite touch of luxury.

Visiting Sirin Labs website you’ll be indulged with a high-tech overview of its main offering: the Solarin smartphone. It’s available to purchase now and starts at the low price of $13,800 USD. Chump change, right?

The Solarin Fire Black Carbon Titanium includes some of the newest technologies paired with some of the most exquisite materials. Sirin Labs ships each phone with a Qualcomm Quick Charge 2.0 charger, Beryllium earphones, a USB 3.0 A-C and USB 3.0 C-C cable, and a microfiber cloth.

Sirin Labs has also teamed up with Zimperium to protect against cyber threats and Koolspan’s chip-to-chip 256-bit AES encryption. You’d be hard pressed to find a more secure phone.

Other common-place specs include a 5.5 inch 2540x1440p display, a 23.8 megapixel camera, Wi-Gig connectivity, a Snapdragon 810 and whopping 4,000mAh battery. Memory is plentiful with the meaty 128GB storage and 4GB of system RAM. This is a dream phone for a wealthy person that’s really into technical details.

Similar to the Solarin Fire Black Carbon Titanium, but lacking the titanium in build, this is the Fire Black Carbon DLC. Featuring the same Wi-Gig technology as Sirin Labs other phones which allows speeds up to 4.6Gbps and paired with the same customary military grade security, the DLC (diamond like carbon) edition is for those that want to spend a little more.

Sirin Labs ups the ante with the Fire Black Carbon Yellow Gold edition. Made of black carbon leather and 18K yellow gold as well as the inlayed black diamond, the Yellow Gold phone shines a notch above Sirin Labs other devices. Again we see 128GB storage standard as well as the other internals found in comparable versions. If you have a cool 20,000 dollars lying around, be sure to check out these elegant offerings from Sirin Labs.

Apart from the diamonds and gold that is much coveted around the world, why would anybody want one of these luxury smartphones? Does it makes sense to spend thousands of dollars on a device that may be obsolete in 24 months? Or, worse, already looks outdated when compared to a phone that costs less than a car payment?

For most practical people the answer is a resounding “No”, but a luxury phone can be a status symbol the same way a luxury car might be.

If someone was to buy a luxury car, he or she would not expect that much more performance, safety or efficiency when compared to a practical sedan or minivan and the same applies to luxury phones. I’d imagine the resale value would remain high on some luxury phones for the materials alone but with the way technology advances, the actual device would be fairly useless in a short amount of time.

Assuredly, those that have money will always look for new ways to spend it, and luxury phones can fill that void. These phones are marketed towards those that care a lot about looks and material possessions. With prices varying between $5,000 and $20,000, these phones are for an affluent class of people. But even if you had all the money that you ever wanted, would you pay for such an insignificant device?