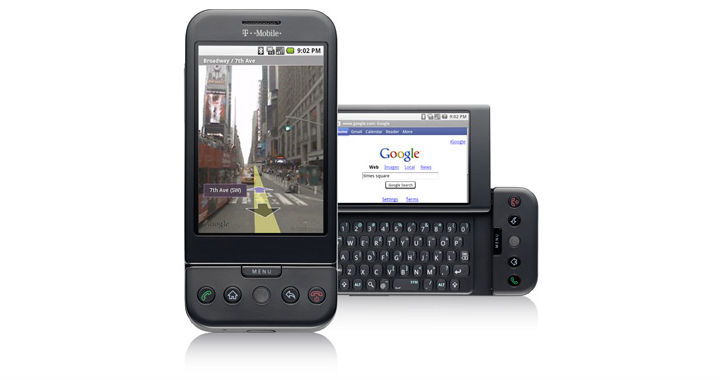 It was exactly four years ago today that T-Mobile USA released the G1, setting off a crazy chain of Android events and momentum.  Manufactured by HTC, the G1 (aka Dream) was the first Android smartphone ever and featured a little bit of everything.  There were no less than three input options for users, including touch display, physical QWERTY, and trackball, and each was helpful in its own way.

As the anti-iPhone, it was all the stuff that Apple’s handset was not, but that’s not necessarily a good thing.  The G1 was called clunky, awkward, and ugly and the OS was deemed half-baked and lacking.  In fact, outside of the Android enthusiast circle, it would have been difficult to foresee so much success for the platform.  Detractors were quick to point out the lack of a 3.5mm headphone jack or lack of a flash for the camera, however Android faithful were able to look beyond the shortcomings. Nevertheless, we were in love with our G1 and would not be swayed.

The G1 launched with a beta version of the Android Market with consumers able to choose from a whopping 50 applications. Fast forward today and we have more than 600,000 apps and counting.

Hardware at the time, was pretty darn impressive and would actually be the type of stuff that would power more than a few devices down the road.

Hardware for the T-Mobile G1:

Available in black, white, or bronze, the G1 was the first foray into Android for a large number of our readers.  We could not wait to get our hands on one of these as it would be our daily driver for quite a long time.

Did you buy a T-Mobile G1?  I’d love to hear your stories about the handset, the first time you played with it in person.  What was your first reaction the second you had Android in your hand?