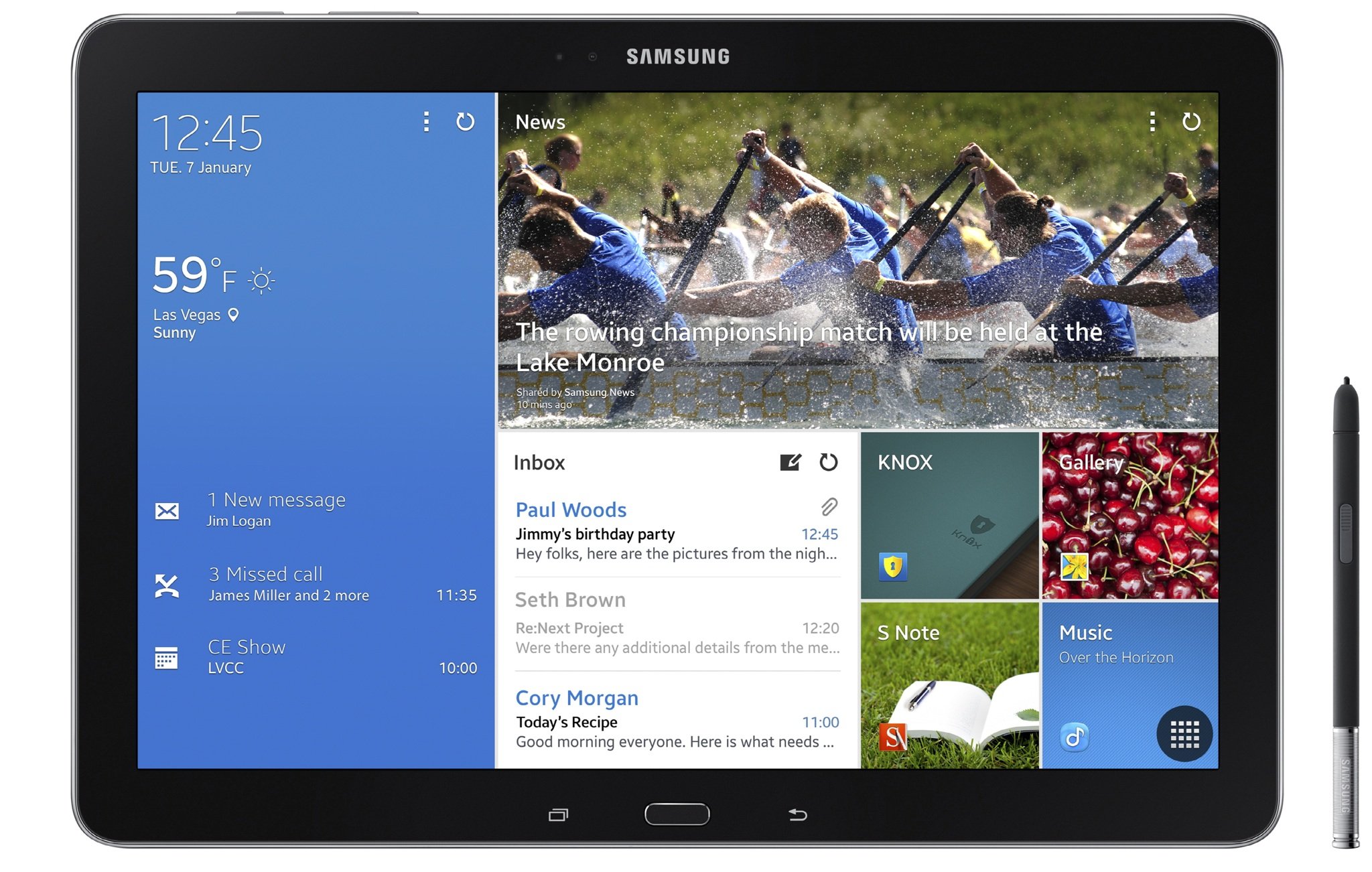 With a gorgeous 12.2 inch display this device will confuse most lay-people who witness you using it in public because, “I didn’t know they made iPads that big!”

Using the device at first is complete joy, I found myself grinning from ear to ear just in awe of the size of the thing. Aside from its weight, web browsing and reading are great. I really like the soft-touch, leather textured rubber of the back panel. On a device so big and unprecedented in the Android world, I didn’t find the TouchWiz UI to be overbearing or annoying at all, but mostly because when dealing with a totally new form-factor, it’s easy to keep an open mind.

My only real complaint about Samsung’s design choices here are the fixed capacitive buttons and home key. Although it’s nice to have the extra screen real-estate from the lack of navigation bar, the fixed buttons get in the way when holding the device in portrait mode. It feels a bit like being treated like an iOS user “You’re going to use this the way we want you to use it, and any other way is wrong.” They could redeem themselves in the next model if they added invisible navigation buttons to all four sides of the bezel and only allowing which ever side of the bezel is currently at that the bottom light up or respond to touch.

After a week or so of use, the device had lost most it’s grandeur. I all but stopped using it for pleasure and only picked it up when I had to work the go. It is the best Android-powered solution for mobile work productivity. It seems that a screen this size is the first place multi-window and split screen apps have really found a home. I am able to have Gmail and Hangouts open sharing half of the screen and Chrome working on the other half, with the small movable Swype keyboard, working was a dream, and each app had plenty of real-estate to be able appreciate all of it’s features and see all text.

I didn’t find myself reaching for the S-Pen often because Swyping is much faster for input, and for some reason the links in Chrome would tend to get confused when the S-Pen was out and stop responding to finger touches, so I was never able to get a proper taste for it.

Overall the Note Pro is great for productivity, but that’s about all. It’s fun to see apps on the bigger screen, but since displays this size aren’t common, developers haven’t yet started catering to this size. Most of the time, you’re just going to be looking at a magnified version of what you’re used to seeing on your 10.1 inch tablet.

If you’re familiar with the 2014 Note 10.1, the hardware looks exactly the same, but larger. The top center, directly above the Samsung logo you’ll find the IR blaster, to the left are the volume rocker and power key. On the right hand side of the device the S-Pen can be removed from the top corner above the the right speaker. Then the USB 3.0 slot in the center, above a MicroSD slot and SIM slot. The bottom side is smooth and clean. The left holds only the 3.5 mm headphone jack directly opposite the S-Pen above the left speaker.

As I said, TouchWiz doesn’t feel overbearing on this device, but mostly because you can’t be sure what to expect from such a device, so Samsung had free reign to set the bar wherever they wanted. Their stock keyboard feels great, and with the screen-size, you’ll feel like you’re actually typing on a full-sized keyboard for the first time on an Android tablet.

They didn’t try hard enough to jack up the resolution, so a icons, apps, fonts and settings all tend to feel large and toy-like. the worst offender is the notification shade in portrait mode, it takes up the entire screen like a phone.

If you read my review of the Verizon LG G Pad 8.3 LTE, you’ll recognize this, but as they are both Verizon devices, I can’t rightly publish the review without touching on the data connection!

Let’s talk about having 4G LTE on your tablet. I admit, up until I reviewed this unit, I was one of those people who preached against tablets with dedicated data lines. “Just use your phone as a hotspot!” I would say. But I have to say, having that data connection all the time has won me over. How best to do this? Numbered list!

Reasons to have a dedicated Verizon data line on your tablet

Basically, if you’re a tablet user, and you constantly find yourself switching on your phones hotspot, but don’t use the hotspot for much else, this could be a great alternative for you.

The Note Pro is huge, but so is the price. At $750 with a 2-year activation and $850 outright, I can’t say I would recommend this device to anyone who didn’t know for a FACT it was worth the money for them, or have a very good reason why this is the tablet they need.