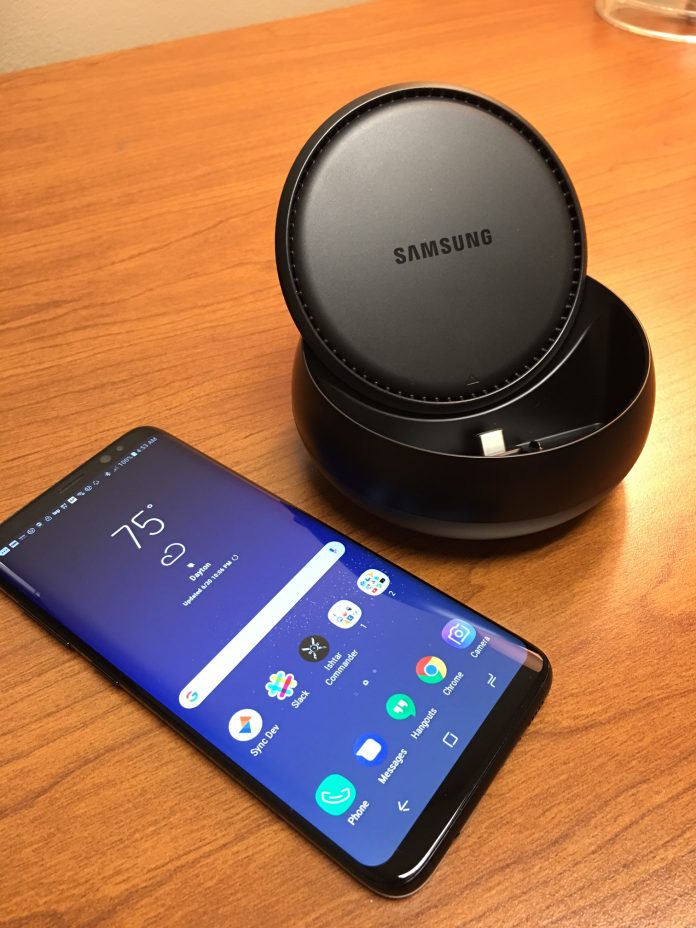 I recently made a change in my life. I went from full-time morning television director and part-time writer here at AndroidGuys to a full-time writer for AndroidGuys. It’s been a gigantic shift in my life and I am so grateful to have the opportunity to work full-time for a site that I’ve grown to love in the (almost) two years I’ve been writing here.

When I started working full-time for AG, I was working from home. I have a wonderful setup, to be completely honest. My wife and I made a custom desk to fit our space and needs, I’m comfortable here, and I have everything I need. But… I also have some things I don’t need: distractions.

A study out of Cal-Irvine says that most workers only get 11 minutes between distractions and it can take as many as 25 minutes before returning to the task you were working on. I love my wife and my daughter; they’re my favorite people in the world. I love my dogs; they’re great companions. I tolerate my wife’s cats; they’re there.

But you never know how truly distracting it can be to have loved ones around. Even when they’re chilling on the couch I’m distracted because I just want to be with them, you know? And that doesn’t take into account when they’re playing around, doing chores, or whatever else is going on.

So, I made the decision last month to rent an office. There are complexes everywhere that allow companies to rent out single or multiple offices in their buildings. It’s a very cost-effective way for a company to keep some representatives in the area without opening up a branch. Being in a military town, we see a lot of military contractors use these offices, but it’s also perfect for someone like me. I just need a quiet place with stable internet to hash out some articles.

I thought it might be interesting to give you an idea of what it’s like behind the curtain, so to speak, and talk about some of the gear that I use in the office I have.

The area I work in at home is about 150-200 sq ft so when I was told the office I was getting was less than 100 sq ft, I was less than enthused, to say the least. But, it was honestly pretty perfect. I walked in, my desk was right there and I had another storage space to put some of my stuff down. I didn’t have any use for more space and once I realized that, I felt much more comfortable.

My office came with a 100Mbps wired internet pipe that was more than enough to complete my tasks. Really the most intensive thing I’m doing with the setup I have is downloading and editing some pictures I may have taken for a review. Nothing too serious. I did have the option grab a cheapo wireless access point, but I really didn’t need one so I passed. I can see someone in a larger office or someone renting several offices going for this option but it really didn’t make sense to me.

One of the big benefits of the office was beyond my doors. The office staff is simply phenomenal. In addition to helping me out with things like copying, scanning, and faxing, they also provided popcorn on Wednesdays, breakfast on Fridays, and a really nice atmosphere. If I ever needed a conference room, all I had to do was book it in advance. This is perfect if I would ever need to meet up with anyone with an interest in the business side of the site.

Alright, so that should give you an idea of where I was working, let’s take a look at what I was using for work.

My computer… wasn’t a computer at all. At least, not as you’d normally consider it. Samsung sent over a Dex and Samsung Galaxy S8 for us to test out and I thought this was the perfect setting for the test. 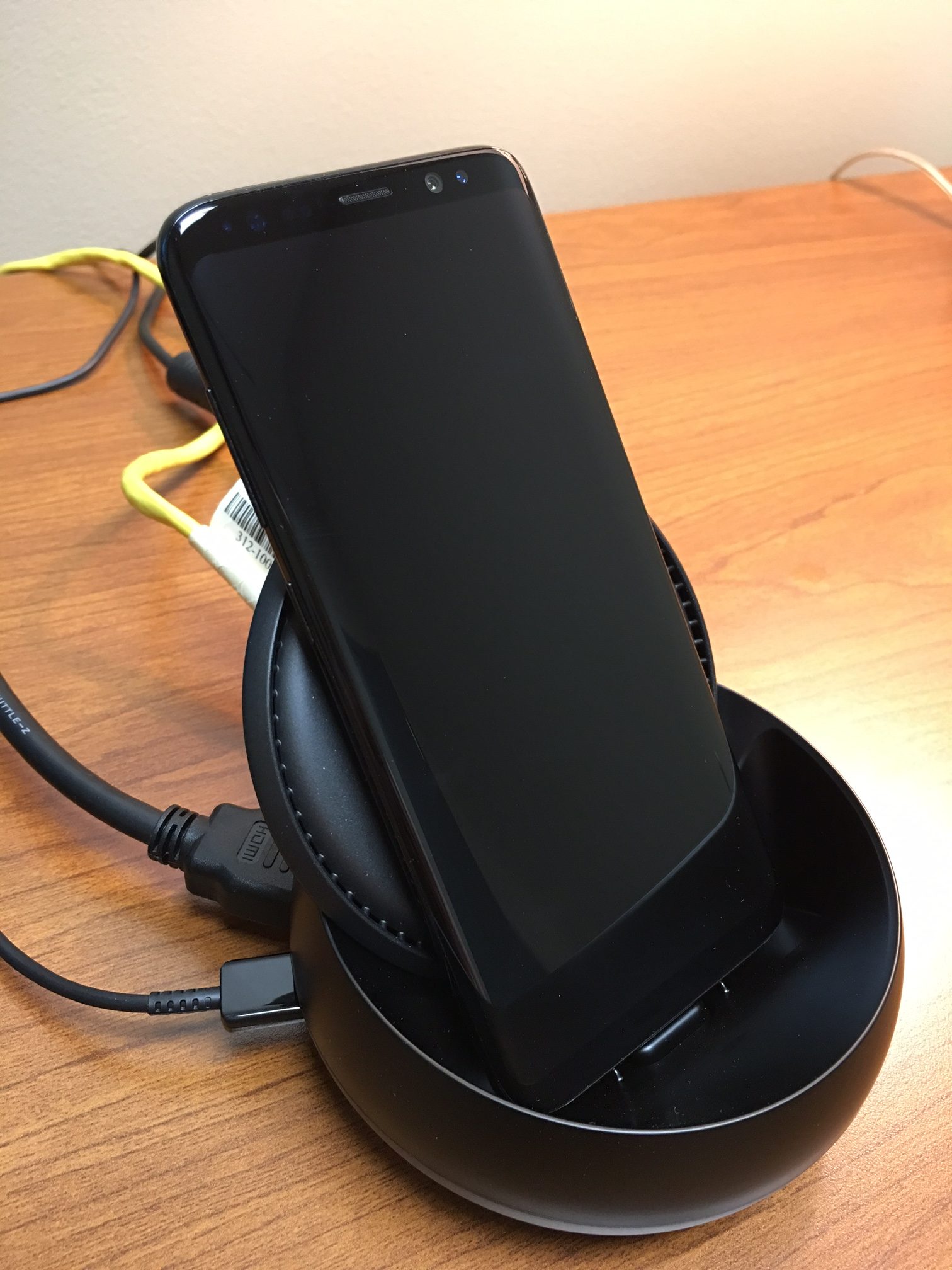 I was impressed with the overall build-quality and ports on the Dex and my thoughts on the S8 have been well chronicled here since my daily driver (that I spent my own money on) is the Samsung Galaxy S8 Plus.

Slotting the S8 into the Dex almost immediately boots phone into the Dex desktop and lets you use the applications on your phone in a desktop environment. I had varying degrees of success depending on the application I was trying to use. Some photo editing applications simply wouldn’t even launch while apps like Slack were rock solid.

I ran into more problems with Chrome than anything else, though. Since you’re using your phone, it still sees Chrome as the mobile browser instead of the desktop variety. While you can request the desktop site for my sites, they don’t always respect that and you can get weird interactions when a site gives you a pop over for something like a login screen. It’s not perfect, but you can generally get the job done with a little elbow grease. 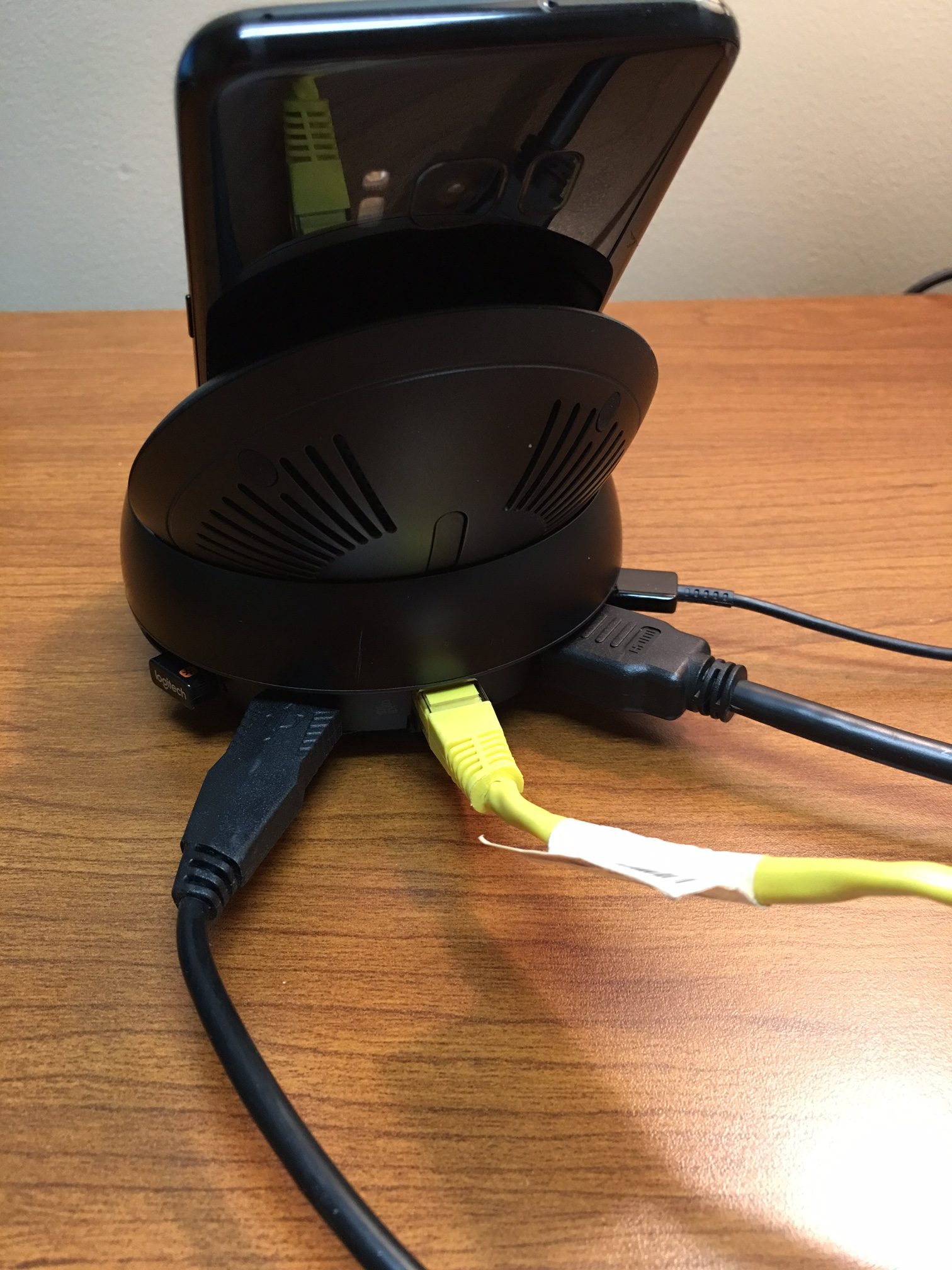 Dex feels a little bit like a first gen product right now. I know there have been tries by other companies (like Microsoft Continuum), but I’m interested to see where it goes with Samsung’s backing. I could easily see these deployed in the sales bullpens around the country. A salesperson walks in, plops their phone on the dock and gets to work. When they have to leave to meet a client, they grab their phone and head out with all of the work in their pocket.

They keyboard I used is nothing special. I found it on Amazon several months ago and it fit the need of having blue mechanical switches and a small form factor. It’s been a rock solid performer for me even though I’ve thrown it in bags to take with me and it’s been through the ringer in there. I haven’t tried out the water resistant claim that the manufacture makes, but even if it got ruined, you can’t really get a better mechanical keyboard for the $34 it’s listed for. 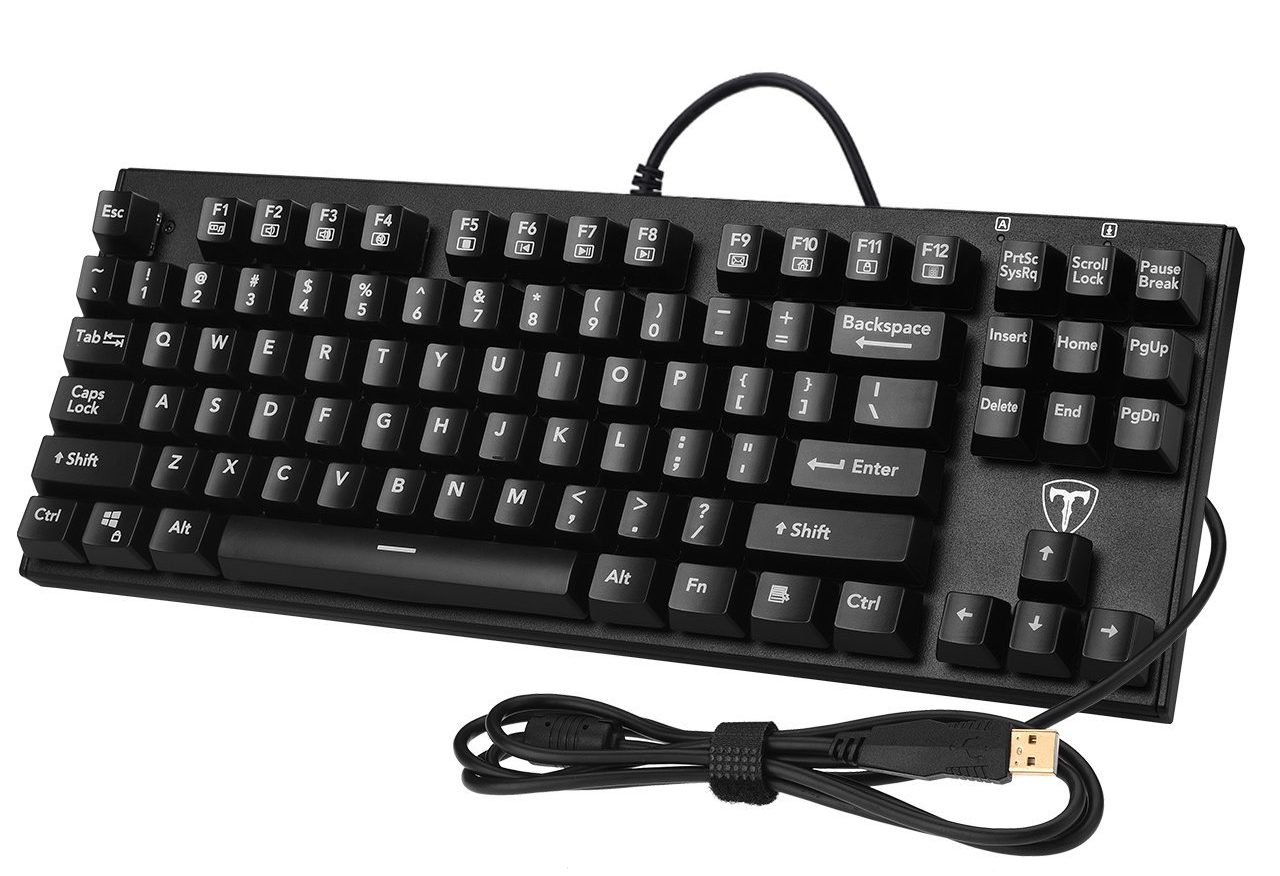 For my mouse, I couldn’t bring myself to use anything else than the Logitech MX Master. I have one at home at my desk and I’m so in love with it that the idea of using another wireless mouse was a painful one. It fits my hand perfectly and I know exactly what I get with it; the best wireless mouse on the market. I was able to pair the MX Master with the phone directly using Bluetooth so I didn’t have to use one of my USB ports on the back of the Dex. It’s an excellent solution and Android’s mouse support is very good, in my opinion.

I recently was put in contact with AOC who was interested in having us look at one of their monitors for review. Much like the Dex, I thought this was the perfect solution. The AOC P2779VC is a 27″, 1080P monitor that features a wireless charging base. I wasn’t able to use the charging base since my phone was sitting in the Dex the entire time, but I know that if I were using this monitor with a normal desktop PC, that’s exactly where my phone would be. Having wireless charging in the base is just a great idea. 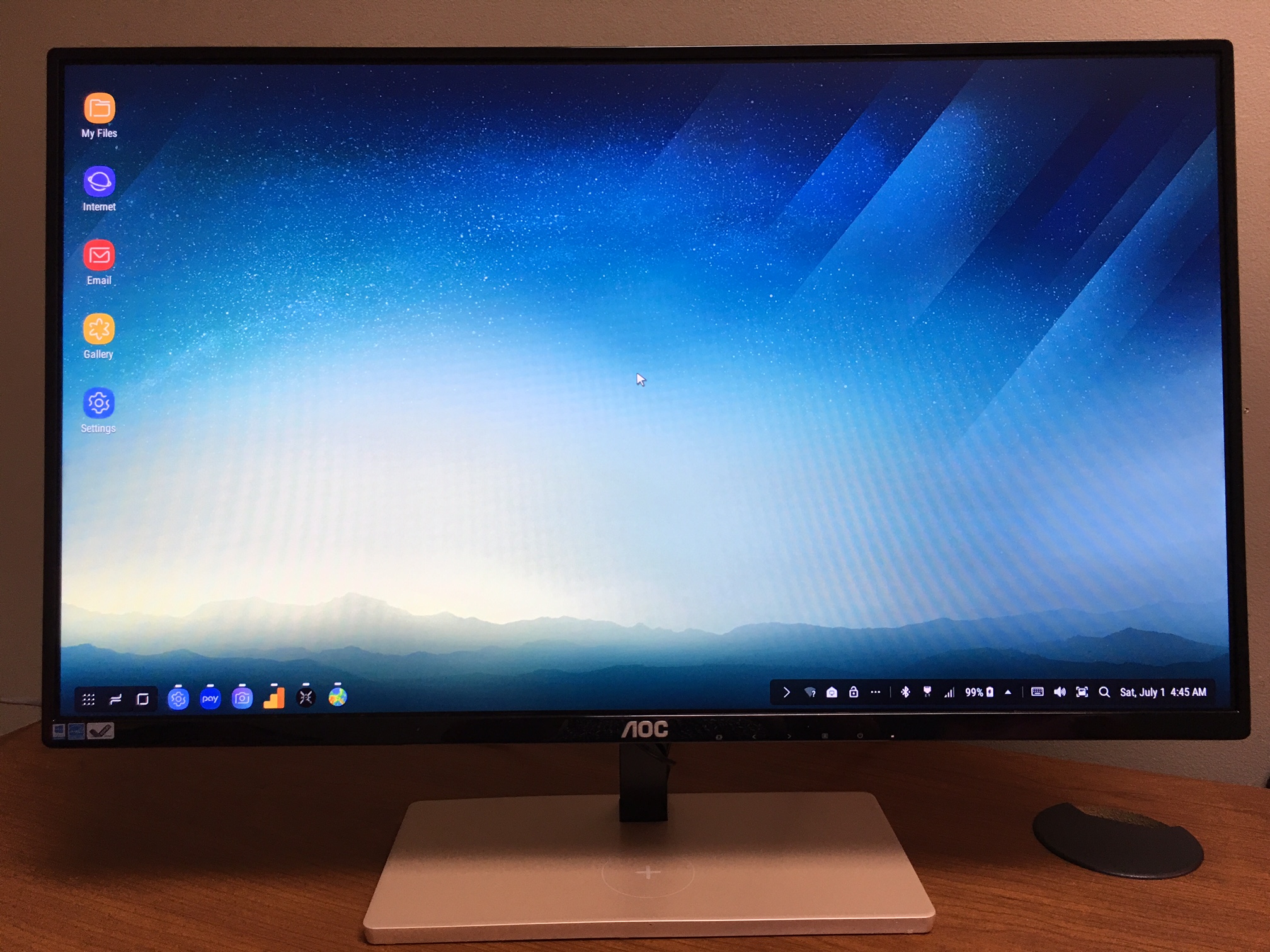 I know there are higher resolution monitors on the market that we could’ve reviewed, but I was a bit worried about having the phone push all of those pixels while in a work environment, rather than just when I’m screwing around on Facebook or Reddit. I thought 1080p was the sweet spot for productivity since I’m not doing any fine photography editing, just some cropping, and scaling.

I loved the aesthetics and the wireless charging in the monitor, but I do with the stand did more than just raise and lower. At the minimum, some tilt would’ve been nice. I wasn’t overall impressed with the color reproduction of the monitor, but I thought it did well with blacks and viewing angles. I often sit to the side of my monitor and turn my chair so I’m often sitting angle to the monitor and I noticed no color shifting or dimming when I did so. That was a huge plus in my book.

This was one of my favorite parts of my adventure. When I began the search for some decent speakers, I wasn’t really finding much in the area I wanted to spend (about $100). Then I remembered that I have a wonderful Bluetooth speaker sitting in my drawer and I quit my search.

So, I plugged my Fugoo Style XL and couldn’t have been any happier. I had the option to go with either a wired or Bluetooth connection to the Galaxy S8 but chose wired since the sound quality would be just a little bit better and I wouldn’t have to worry about any interference. I couldn’t be any happier. I’m in a part of the building with a few empty offices around me and the speaker allows me to listen as loud as I want and the audio quality is fantastic.

I know this isn’t the perfect solution for everyone, but it has worked out really nicely for me. I’m close to the office, not spending a ton of money, and I can write distraction free. I now have the ability to send out and receive packages at an office where I know they will be looked after instead of dropped at my front door where anyone could walk up and snag them (although, if they try, they should smile for the camera!)

One of the advantages I never considered when this journey began was just being around people. Now that I’ve left my job in television and I write full time, I see my family and occasionally will get a beer with a buddy, but for most of the day, I don’t see anyone else. Just being in an environment where there’s movement and people is really nice.

I’d like to thank Samsung and AOC for sending over some products for this article. While I would’ve been working in my office regardless, it was fun to play around with some of their cool stuff in the process. The rest of the products, I bought myself.

The opinions in this article are my own and not in anyway influenced by the lending of products or any kind of financial transaction.

Samsung DeX for daily use — How does it fare?