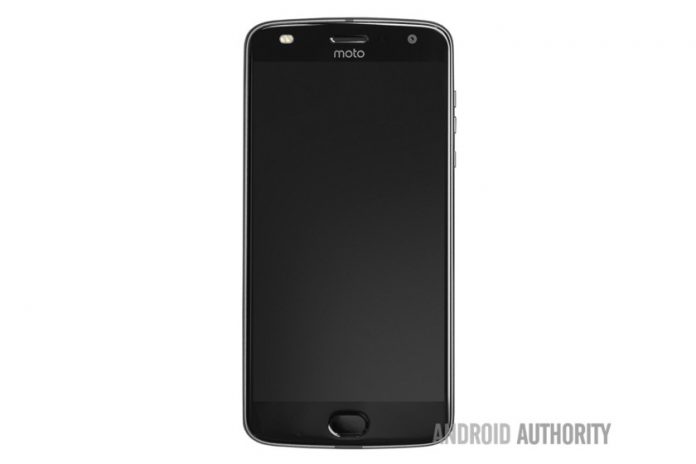 The OnePlus 5 is one of the flagships hotly anticipated by Android enthusiasts from around the world. But it’s by no means the only phone currently fueling our imagination.

Given the deluge of leaks we’ve seen in the past few months, Motorola is also gearing up to unveil a host of new smartphones, the most exciting being the Moto Z2 family. In 2016, Motorola ditched the Moto X in favor of the Moto Z, Moto Z Force and Moto Z Play.

The trio of phones was well received by customers, but now the time has come for Motorola to refresh the lineup. So what can we expect the Moto Z2 to bring to the table this year? Keep reading to find out.

If all the leaks so far are any indication, all Motorola’s upcoming phones including the Moto Z2 will benefit from a design reminiscent of the Moto G5 and Moto G5 Plus. This means we can say good-bye to the quirky square-ish physical home button and hello to a candy-shaped one. Naturally, we expect the Moto Z2 to be made of metal.

The original Moto Z made a debut into the wild with a 5.5-inch display with 1440 x 2560 resolution, so chances are the Moto Z2 will come with a similar configuration. On the other hand, Motorola could opt to bring forth a phone with a slighter panel onboard, maybe a 5.7-incher or a 6-incher? The lower-end member of the yet-unreleased Moto Z2 lineup, the Moto Z2 Play has been tipped to arrive with a 5.5-inch display with FullHD resolution (1920 x 1080).

Following trends in the industry, the Moto Z2 could launch with really slimmed down bezels, although judging by the leaked renders we’ve seen so far, we won’t see any extreme changes compared to the Moto Z.

05/22/2017 Update: The Moto Z2 Play appeared in the Chinese regulatory agency, TEENA revealing its full specs. The phone should make it out with a 5.5-inch OLED display with fullHD resolution (1920 x 1080) and a Snapdragon 626 processor under the hood. 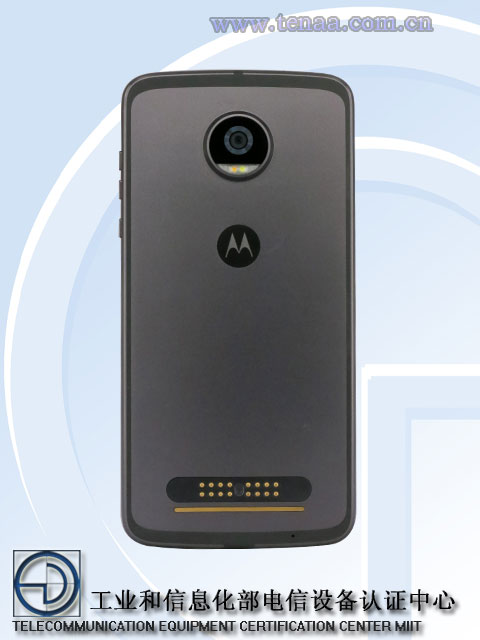 Motorola is also offer 4GB of RAM and 64GB of internal storage, plus a 12-megapixel main snapper.

In related news, Lenovo has confirmed the phone will carry a 3,000 mAh battery.

05/29/2017 Update: An official press render of the Moto Z2 Play showed up thanks to WinFuture’s Roland Quandt‏ who Twitted it:

A follow-up tweet also which included an official promo add revealed the phone could go live as soon as June 1.

So far, most of the Moto Z2’s internal specs are shrouded in mystery. However, we expect the phone to come equipped with a new Snapdragon 835 processor and at least 4GB of RAM and 32GB or 64GB of internal storage.

It’s quite possible Motorola will be looking to take things to the next level, so a 6GB of RAM plus 128GB storage variant might also be in the cards. 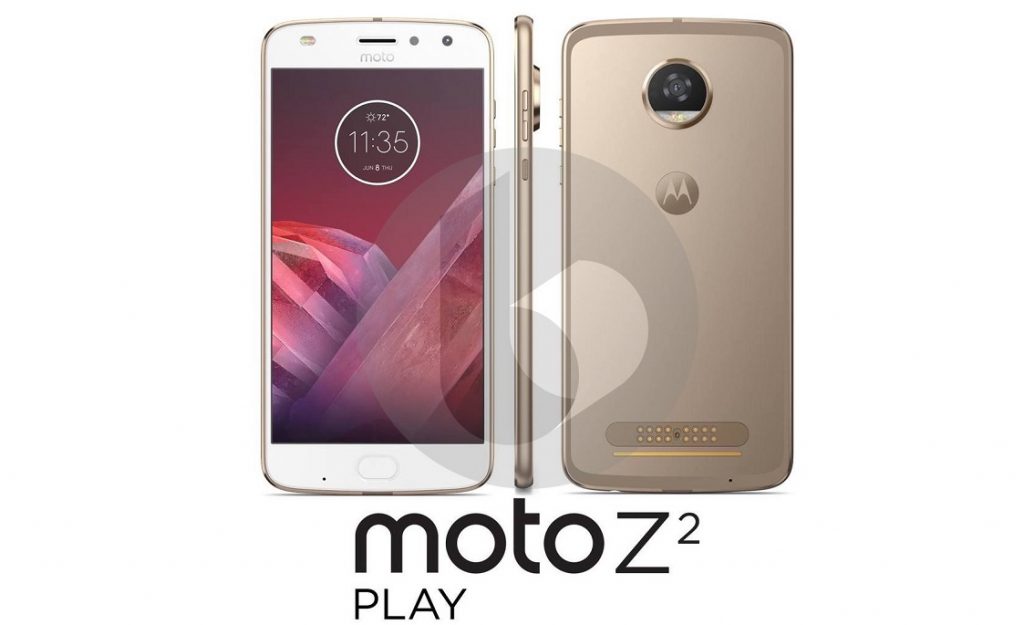 The Moto Z2’s lower-end variant, the Moto Z2 Play is rumored to arrive with a Snapdragon 625 or 622, 4GB of RAM and 64GB of internal memory, which is why we believe the Moto Z2 will offer more in terms of RAM and storage.

The Moto Z features a 13-megapixel main camera, but following this year’s trend, the Moto Z2 will probably take advantage of a dual-camera setup instead. Evidence to support the theory comes via a recent leak which reveals the Moto Z2 Force will feature dual cameras on the back. Which gives us reason to suspect the Moto Z2 will boast the same. But not the Moto Z2 Play, which according to leaked images will pack a single sensor on the back.

An older rumor indicated the Moto Z2 might come with a lower megapixel count, but larger pixels and quality lenses allowing for improved low light images. Additionally, the camera should have laser autofocus and optical image stabilization.

05/17/2017 Update: A render of the Moto Z2 Play’s back showed up online (alongside that of last year’s Moto Z and Moto Z Play). As you can see, the phone won’t feature a dual-camera system. 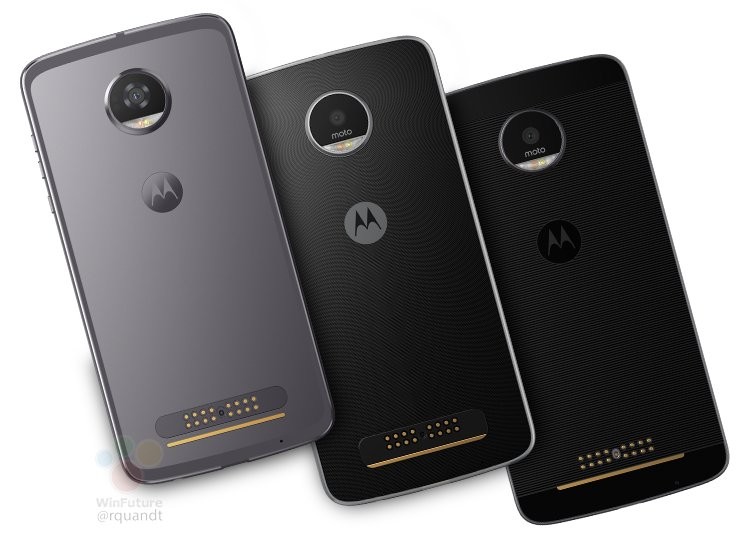 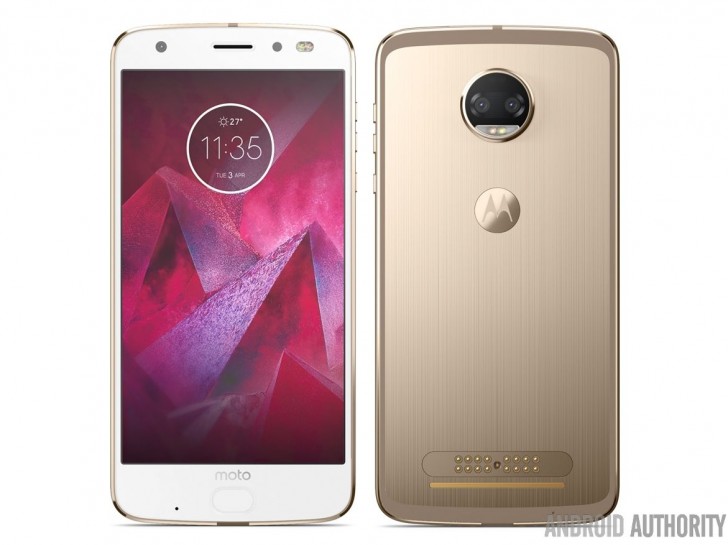 As for battery, word on the street has it that the Moto Z2 Play will bring forth a smaller battery 3,000 mAh battery than its predecessor which features a more advanced 3,510 mAh one. Motorola will apparently shrink the battery in order to reduce the thickness and weight of the phone.

All models will probably come with at least Android 7.0 Nougat out of the box (although Android 7.1.1 is more likely) and will probably feature microSD card slots onboard too.

Of course, Motorola’s next-gen Moto Z2 lineup will be compatible with old and new Moto Mods. We expect the company to launch new Mods alongside the phones like the MACAY TrueSound HiFi mod that can an audio convertor on the back of the phone.

05/29/2017 Update: Images of the upcoming Moto Z2 Play retail package have been posted on Instagram. The pictures confirm most of what we know. The phone will come equipped with Mods (or Moto Snaps in Spanish), 5.5-inch display with 1920 x 1080 resolution, as well as a fingerprint scanner, 4GB of RAM, 64GB of internal storage and a main 12-megapixel camera. The device will rely on a 3,000 mAh battery. The Moto Z2 Play box comes with a Turbo Charger, USB and micro USB cables, as well as earphones.

At this point, we can only tell you the original Moto Z had a starting price tag of $699, so the Moto Z2 should come with similar pricing.

It seems like this year we might not have a Moto Z2 Force Droid as Verizon, as it is believe the Force model won’t be exclusive to Big Red anymore, but will also be offered by T-Mobile and Sprint.

Expect the Moto Z2 and related models to make a debut sometimes this summer.