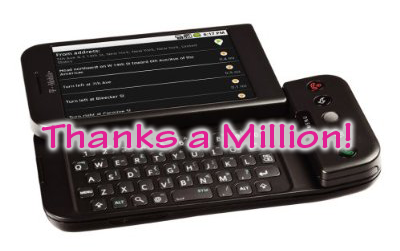 T-Mobile’s 3G network might not have near the footprint that other companies have, but that isn’t stopping the G1 from selling well. After 6 months on the streets, the G1 has gone on to sell 1 million units in the US. This is a rather impressive figure for a number of reasons.

At the time of the G1 launch, T-Mobile’s 3G network was only available in about 2 dozen markets. In the months following, they’ve expanded to cover over 100 million people. It’s not exactly simple to sell a device that relies so heavily on data, when most of your customers live in GPRS/EDGE markets. Speaking of which, it’s only been about 2 months since you could go into an EDGE-market T-Mobile store and take one home with you. Had this been available since day one, we could be looking at a much higher figure.

When the G1 was released, many called the device clunky and dull. This figure is all the more compelling, after 1 million people were sold on a not-so-sexy handset. Could the success be a result of Android alone? The answer is an obvious “no”. Other factors include some top-notch customer service and very tempting rate plans.

Now we wait to see what T-Mobile has up their sleeves. A few more months without another Android device could slam the brakes on their overall numbers. With an ever-growing 3G market to pay for, declining net adds and lower ARPUs could hurt pretty bad. Don’t rule out the effect of the economy either. Prepaid and all-you-can-eat plans seem to be picking up momentum.

In an interesting side note, the G1 accounts for 2/3 of all 3G enabled devices on T-Mobile’s network.