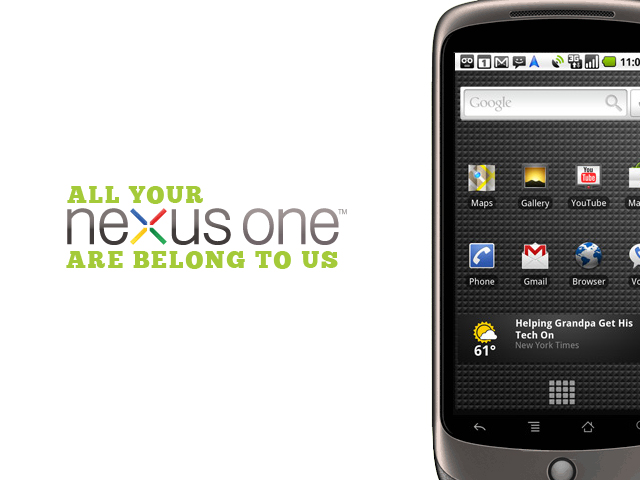 After going from hot rumor to official announcement, it’s time we take a look at what the Nexus One is and isn’t.Â  We’ll do our best to get to the point and answer any questions you might have about the phone.Â  Below are the top 10 questions we’ve been receiving from readers and interested parties.Â  Feel free to add your own questions at the end for others!

What is the Nexus One?
As Google puts it, the Nexus One is the first “superphone”. That is to say it’s the next evolution in what (Android) handsets are capable of.

Who makes the Nexus One?
The handset is made by HTC with input from Google.

What is so special about the phone?
For starters, the Nexus One features a blazing fast 1GHz Qualcomm Snapdragon processor.Â  Throw in a 3.7-inch (480×800 AMOLED screen), a 5 megapixel camera with an LED flash, wireless support for 802.11 a/b/g/n, a trackball with multicolor LED, and you see where we’re going.Â  There’s also a compass, GPS, accelerometer, stereo Bluetooth, a 3.5mm headphone jack, light and proximity sensors, and two microphones for “active noise suppression”.Â  All of this is powered by a 1400mAH battery.Â  Oh yeah, it’s crazy thin.Â  Like, less than a pencil, thin.

What else?
The Nexus One comes loaded with Android 2.1, which features the same great software found in the Motorola DROID, plus more.Â  This latest version also offers great voice integration.Â  Every text field found within Android 2.1 is voice enabled, meaning you’ll not have to physically type out emails, texts messages and tweets.Â  There are also ‘live wallpapers’ with interactivity, a new weather/news widget, Google Earth, and an updated gallery.

Where can I buy a Nexus One?
You can immediately order an unlocked GSM Nexus One at $529.00 at google.com/phone.

What if I don’t want to spend that kind of money?
A subsidize Nexus One can be yours for $179.00 as long as you commit to a 2-year contract with T-Mobile.Â  The catch here is that you must use it on individual, post paid, rate plans.Â  Family plans, and FlexPay customers are not eligible at this time.

What rate plan will I have if I get a Nexus One?
As of today, there is only one plan to choose from – 500 voice minutes, nights and weekends, messaging (SMS and MMS) and data.

I don’t want to sign up with T-Mobile.Â  Are there other options?
A CDMA version of the Nexus One will be available in the spring of 2010 for Verizon customers.

Will there be an unlocked CDMA Nexus One?
Don’t count on it.Â  The answer that was repeated a couple of times during today’s conference was that there will only be a Verizon-based CDMA Nexus One.