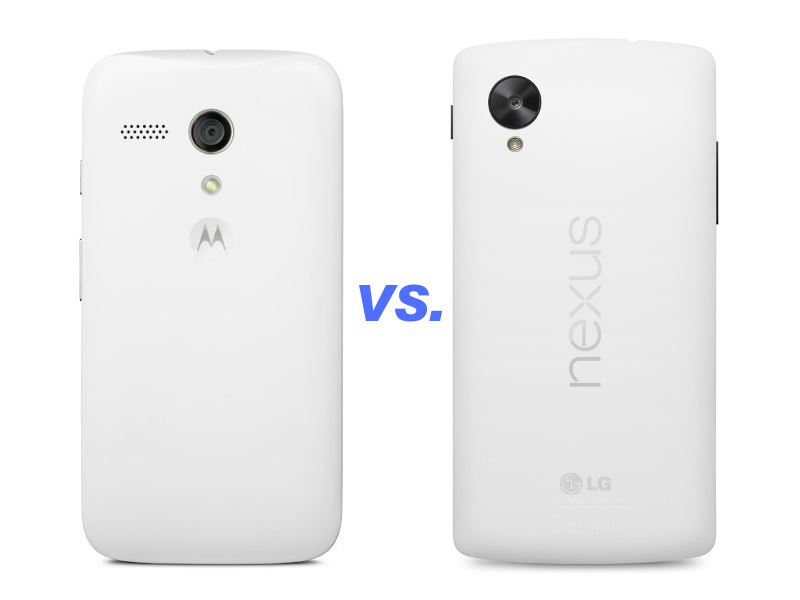 Now that the Moto G and the Nexus 5 are both official, we thought we’d take a look at some of the key differences between the two devices. At first blush, they share a few things in common. Sure, they’re both offered (or will be) direct to consumer in unlocked, contract-free manners. Both also feature attractive price points, something that never hurts. But, with roughly $170 difference between them, there has to be some differences.

Let’s take a quick and dirty peek at the key points that make these two models unique and different from each other. Both are geared toward specific demographics and target audiences and will serve their purpose well.  We want to ensure, however, that you make the right choice for yourself or someone you know.

The Nexus 5 already comes loaded with the latest version of Android, the 4.4 KitKat release. Motorola indicates that the Moto G will receive its Android 4.4 update by January, which happens to be the same time frame as the U.S. launch. Both run a stock version of Android, although Motorola has added a couple of their own services on top. It’s not bloatware or stuff you’ll hate, but it’s present nonetheless. In terms of upgrades, both should pick up a few releases along the way, but we give the edge to Nexus models over everything else. This is not to say, though, that Motorola won’t get it right with the Moto G and keep things updated in timely manners.

Those of you living in the United States will have to wait if you want to pick up the Moto G as it’s not available yet. The Nexus 5, however, can be ordered through a couple of channels but, good luck getting it anytime soon. The 16GB models are selling quite well in the early days after launch.

As mentioned above, the Nexus 5 comes with 16GB and 32GB storage capacities while the Moto G offers customers 8GB and 16GB options.

The Nexus 5 boasts a 4.95-inch 1920×1080 display (445 ppi) while the Moto G comes with a 4.5-inch 1280×720 (329 ppi) screen. Not only smaller, the Motorola screen is also a lower resolution and pixel per inch count. Not that this is perceptible to most users, but’s a difference on paper. What’s more, the added benefit of the lower resolution comes in battery life and performance. In other words, it’s less demanding of the phone to power those pixels.

Look under the hood of each device and you’ll find that both are powered by Qualcomm Snapdragon processors. The Moto G features a 1.2GHz quad-core Snapdragon 400 processor with 1GB RAM while the Nexus 5 boasts a 2.3GHz quad-core Snapdragon 800 processor with 2GB RAM. This is a big deal for those who like to play high end games, mess with streaming video and audio, and really put their phones through paces. Average users, on the other hand, might not notice the difference in taking calls, messing with Facebook, etc.

The Nexus 5 wins out here with its 8-megapixel rear camera and optical image stabilization but the Moto G is no slouch. Motorola puts together a nice and simple user interface for its Moto X and we expect the same for the Moto G. With that said, the Motorola has a 5-megapixel camera in 4:3 aspect ratio or 3.8-megapixels at 16:9 ratio. In terms of video, the Moto G can capture 720p HD while the Nexus 5 goes a step further with 1080p recording.

One of the biggest differences between these two smartphones comes in the network connectivities. First and foremost, the Nexus 5 is a 4G LTE ready device, while the Moto G offers 3G support. For emerging markets this should not matter all that much. Your aunt, who is graduating from a feature phone, won’t notice the difference in the United States, but your buddy who streams music and Netflix will for certain.

Specifically, these are the bands and networks supported for each phone:

Switching over to Wi-Fi, you’ll also find that there are differences here as well. While most people can’t likely tell you what kind of Wi-Fi network they have at home or in the office, your device knows. The Nexus 5 can connect to more, and faster, networks than the Moto G. Again, it’s easier shown in bullet points than in sentences. If you’ve got a new router at home or work then you may notice that the LG smartphone pulls down faster and more reliably than the Motorola.

There’s quite a bit more that the Nexus 5 offers over the Moto G in terms of sensors. As to whether that matters to the typical user takes advantages of these sensors, however, is a different story. With that said, the Nexus 5 is packed with finer details such as Bluetooth 4.0 LE, NFC, SlimPort, dual microphones, a proximity sensor, ambient light detection, a gyroscope, and more. The Moto G, for its part has Bluetooth 4.0, GPS, 3.5mm headphone, and microUSB. In other words, all the stuff you’d at least expect in the “typical” smartphone experience. Also, its important to note that Moto G has trusted Bluetooth devices, the feature that was debuted with the Moto X.

You would be forgiven if you though that there was not that much of a difference between the Moto G’s 2070mAh battery and the Nexus 5’s 2300mAh battery. Both are very respectable and Motorola’s software tweaks and optimizations further blur the line. Each will likely get you through the day without a problem, however only one provides support for wireless charging. We don’t have to tell you which one this is. Also, it’s worth pointing out that you’ll get more out of the Nexus 5 battery should you be connected to slower, less demanding networks. Not on 4G LTE or those high bandwidth Wi-Fi networks? You’ll sip juice instead of chugging.

Suffice it to say, there’s an awful lot of differences between these two smartphones. Either, of course, is a great bargain for the money, and requires no long-term commitment. You’ll need to weigh out these features and determine how important they are to you and your usage.

If you’re new to smartphones altogether then we have no issues with recommending the Motorola first. There’s far more here than you’re used to and its price is almost impossible to beat. Seasoned vets and more demanding folks will likely opt for the Nexus 5 as its geared to the savvier user.