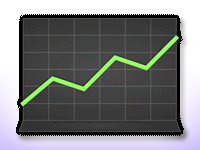 Speaking earlier today at the Droid X launch, Andy Rubin (Google VP of engineering) said that Android phones are being activated at a rate of 160,000 per day.  Yes, that’s almost two activations for every second of the day, every day.  What’s even more is impressive  is the speed at which the figure grows.  Vic Gundotra broke the news at Google I/O last month that the number was at 100,000.  Going back a few months to February, we were looking at 60,000 per day.

Where does this rapid growth come from?  Well, it doesn’t hurt when you are releasing phones like the myTouch 3G Slide, HTC EVO 4G, and Droid Incredible.  It’s hard to guess where the number will plateau as more carriers and handsets climb on board all the time.  The short term releases look to only bolster Android’s growth with various versions of the Samsung Galaxy S, the Droid X and upcoming Droid 2 all slated for a summer debut.