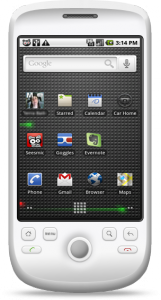 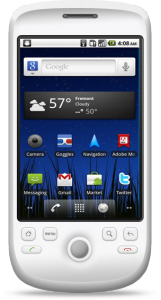 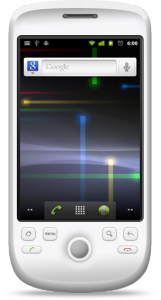 2010 was definitely the year of significant UI changes for Android. Dragging an arrow up to see your apps may seem fancy at the first glance, but after a year or so, you’ll probably want some more eye-candy, and so did Google. The three pictures above are this year’s Android versions, Eclair, Froyo and Gingerbread. The Eclair launcher was called Launcher 2, and it deserved the name! It was a revolution for Android, it gave the whole OS a better look and feel. The launcher illustrates the rest of the device, as it is the first thing you see, apart from the lock-screen. Five homescreens, live wallpapers, boy it was fancy.

Everything has it’s time, and some users were switching (back?) to their iPhones, maybe due to Android’s lack of an application dock. That’s those static apps you always see at the bottom of your screen. Well, Google, again seemed to be listening to its users. They added a dock in their next platform, “Froyo.” Tech-sites all over the world were reporting that Android was finally maturing. Of course, that wasn’t only due to the UI. Features were being added across the entire Android OS.

Then, not unexpected, screenshots began leaking all over the place. Gingerbread was beginning to show itself. Google gave the UI a bit of a green and black color, perhaps to accentuate the fact that it was Android. The curved edges of the dock were gone, swapped for sharp edges. I don’t know why, but the change is apparently cool enough that everyone wants the new look ‘n feel on their device.

2010 was, arguably, the year that Android began going through puberty. Most of the bugs and complaints were addressed–such as Exchange support. Some manufacturers even went so far as to deliver their devices with third-party alternatives. This only led to further frustration from users. This brings me to my next point.

All the manufacturers think that they can deliver their own unique experience by skinning their phones. Sure, it’s unique, but apart from HTC Sense, the manufacturer-specific brandings were massively outcasted. Sometimes  because they looked ugly or caused devices to lag. Most importantly, these UI overlays were criticized for causing OS update delays. The HTC Hero is the best example. It was stuck on Android 1.5 when Froyo (2.2) was launched. In August, the Eclair (2.1) update finally began rolling out, but it certainly took too long, and it still wasn’t the latest software. Android phones have a short live-cycle. After about a year, they typically won’t receive updates–leading users into the custom ROM community.

In conclusion, 2010 was a great year for Android. The platform has made some major strides both graphically and functionally. However, even with all the progress there’s still one issue Google needs to fight–fragmentation. Here’s to 2011!