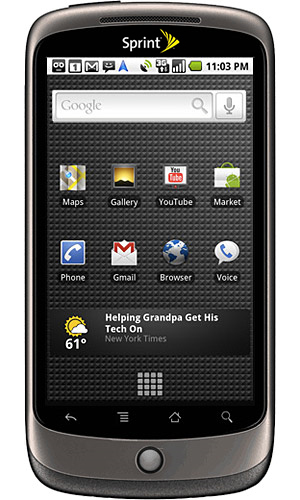 There has been much talk regarding the Sprint version of the Nexus One and whether it will meet the same fate as Verizon’s. Back in March, prior to Sprint’s formal announcement of their support for the Google’s flagship device, I wrote a post entitled “Opinion: What Does Verizon’s Nexus One Mean for Sprint?.” In it, I outlined the many reasons as to why Sprint will be getting the device. Sure enough, I was right.

Since that day, Sprint has confirmed the Nexus One, Verizon has dropped the Nexus One, and I, yet again, have written a post containing the assurance of a Sprint customer support agent, saying that Sprint is still planning to support the device (for whatever that’s worth).

However, in an article entitled “Will the Sprint Google Nexus One be dropped soon too?,” Matthew Miller of ZDNet expresses the possibility of Sprint dropping the device as well. His logic is as follows: Verizon replaced the Nexus One with the HTC Incredible, and therefore, it’s possible that Sprint will replace their Nexus One with the HTC EVO 4G.

In keeping up with my reputation of being right, and with the hopes that the trend continues, I will now give you 3 reasons why Sprint will NOT drop the Nexus One…

Google wanted to change the way smartphones are sold. They wanted one phone, on every carrier, available through a single online medium. As of the January Nexus One announcement, Verizon had come to an agreement with Google, while Sprint had not (for whatever reason). It’s possible that Verizon expressed interest in an exclusivity deal on the CDMA Nexus One, but Google was already in negotiations with Sprint at the time (part of their overall plan from the get-go).

When Verizon didn’t get what they wanted, they saw no point in going forward with a device that was almost the same as the HTC Incredible. There wasn’t enough in it for them. In my opinion, Verizon probably backed out in early March. With Verizon out of the picture, Google realized the urgency of coming to terms with Sprint, who they had yet to finalize a contract with. Without Sprint, they would fail to launch the CDMA version of their phone, and be stuck covering their losses. At this point, they most likely had a contract with HTC to manufacture X amount of CDMA phones. Eventually, Google agreed to Sprint’s terms in the negotiation, and in the process, was forced to give up a little more than than was being discussed in the initial talks. This worked out in Sprint’s favor, and, at the same time, allowed Google to cover their behinds. Sprint then made a formal announcement, seemingly out of nowhere. Why? Because Verizon was already out of the picture and Sprint wanted to make sure the public knew that they’d be the CDMA Nexus One’s saving grace. When Verizon customers would later find out about “big red” dropping the Nexus One, Sprint would already be in the forefront of their minds. This would allow Sprint to pick up some of Verizon’s would-have-been customers.

Just to cover my tail, being that I have been wrong on a few, rare, occasions in the past (just ask my wife), I’d like to present the alternative. There is always the possibility that both Sprint and Verizon had deals with Google at the same time. After all, a CDMA Nexus One would be compatible with both carrier’s networks regardless of who actually supported it, so why would one of them say no? It’s possible that the device then failed Verizon’s internal testing and the carrier decided to drop it when releasing the HTC Incredible. Troubleshooting it just wasn’t worth the hassle. This would mean that Sprint is likely having the similar issues with the device, but since it means more to them, they have yet to formally give up. If the Nexus One was still scheduled for a Sprint release, you’d think Sprint would have reassured its patient customers, don’t you?

Then again, they don’t want to take away from the EVO 4G hype, now do they? While I hear those who are skeptical of Sprint coming through, I’m gonna go with my gut on this one. Sprint WILL release the Nexus One, and I patiently await it.

Let’s hear what you guys (and gals, of course) think in the comments below…

UPDATE: Just my luck… Hours after this article went up, Gizmodo made a post saying that Sprint has confirmed they will NOT be releasing the Nexus One. I have emailed both Gizmodo and Sprint to find out more information. I will keep you all posted.