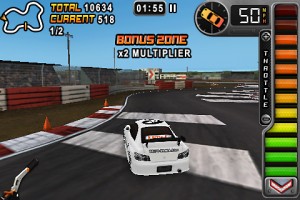 Ratrod Studio has just released their 3D Unity based drift racing game, Drift Mania Championship into the Android Market. The 99¢ game has been a success for iPhone, selling more than 2 million downloads over the last few months. The game was developed in collaboration with a professional Drifting League, DMCC. Users can choose from multiple cars and are scored on Speed, Line, Angle and Impact. Hit the jump to see a trailer for the game. We’ll forgive the developers for using an iPhone, but just this once. Read more information on the Drift Mania Championship website.  Note: Drift Mania Championship requires Android 2.1 and above, so that’s roughly 83 percent of you guys!