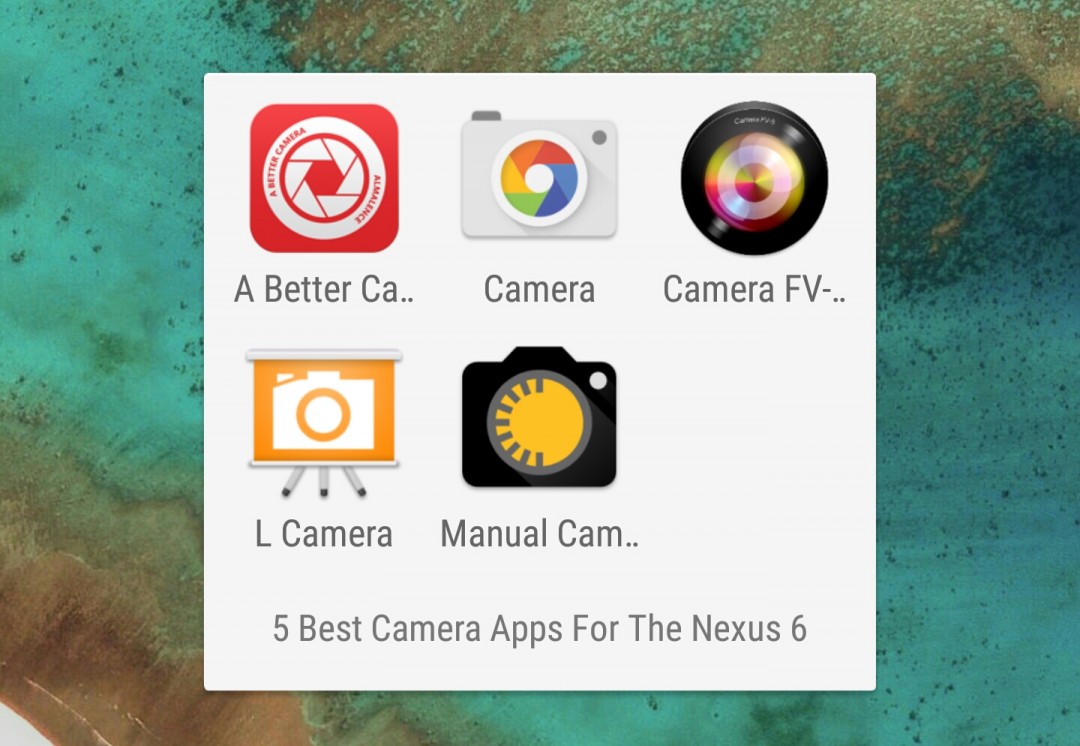 Today, many people only own one camera and they always keep it in their pocket. It is their smartphone. This has caused phone manufacturers to constantly improve the cameras and camera software on their phones with each new generation, and developers focus on making camera apps that improve photo quality and add features to make smartphone cameras as useful as possible. Motorola put a great 13 megapixel camera in the Nexus 6, and today we are looking at the 5 best camera apps you can get on the Nexus 6. 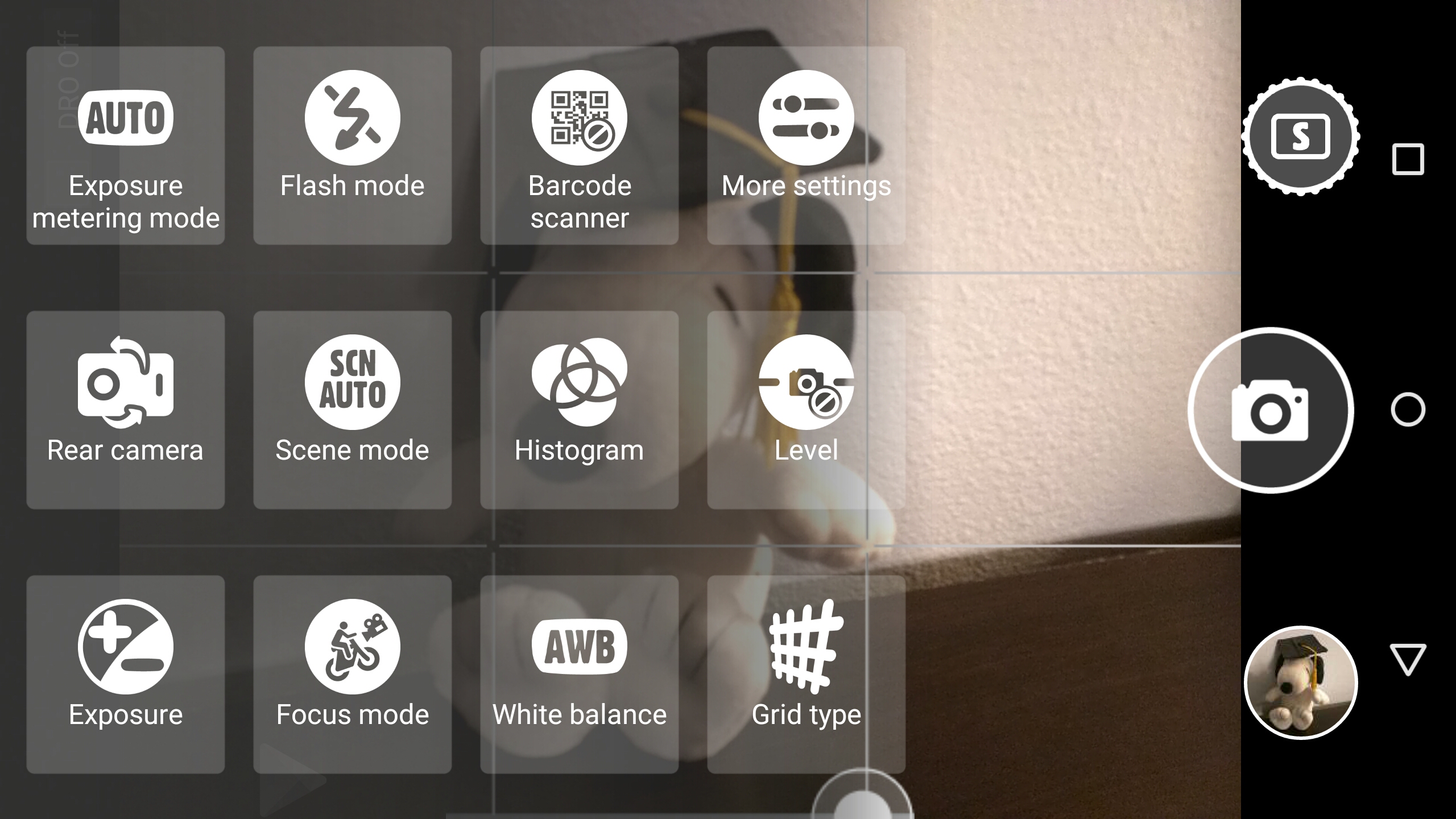 A Better Camera brings several great features to the Nexus 6 that other apps do not. It also takes advantage of Lollipop’s Camera2 API, but you do not have to be running Lollipop to download this app. A Better Camera offers both HDR photos and HDR video; however, the latter is not working on the Nexus 6 but is coming with the next update. Multishot allows you to take a group picture and choose the best face for each person, take a sequence shot, and remove unwanted objects from a picture. Preshot takes pictures before you press the shutter button to ensure you will not miss the shot. Best shot takes several pictures and automatically chooses the best one and deletes the rest. A Better Camera also includes a Burst mode and Night mode plus many other modes and options to fine tune your photo. For more experienced photographers, it also includes exposure bracketing, a live histogram, and the option to shoot in RAW. Of course, A Better Camera is not without its flaws. You cannot shoot video in 4K resolution, the time-lapse feature is not available in the Nexus 6, and the interface is not as appealing as other apps on this list. A Better Camera is free in the Play Store, but there are in app purchases that unlock other feature that some might find useful which can be purchased these individually or buy them all for $7.99. 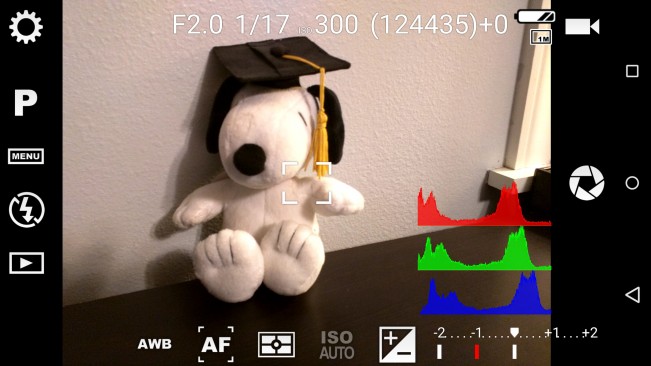 Camera FV-5 is an app that gives you almost full manual control over your phone’s camera, but it also has some other goodies baked in. You have the option to adjust shutter speed, ISO, focus distace, and white balance. For those looking for a more professional experience will be glad to see the inclusion of light metering, exposure bracketing, and a live RGB histogram. One of the coolest features in Camera FV-5 is the ability to assign a camera function to the volume keys. In other apps, you can use the volume keys to take a picture, but in this app you can use them to control different setting in the camera. You can assign you most used setting, such as shutter speed, to the volume keys to that you can raise or lower it by simply pressing the buttons. Another feature that some will find appealing is the option to do a time-lapse. While Camera FV-5 has some great features, it also has its downsides. While there is a video camera icon in the app, video recording is not available. Touching the icon will simlpy give you the option to install a separate video app. Also, the Lite version will only take pictures up to 640×480 resolution. To unlock higher resolutions, you have to buy the Pro version. Camera FV-5 has the ability to shoot in RAW, but the Pro version is also required for that. It is also not the most visually appealing camera app out there. However, if you want a plethora of options and are up for shelling out a few bucks, you can pick up Camera FV-5 Lite free and Camera FV-5 Pro for $3.95 in the Play Store. 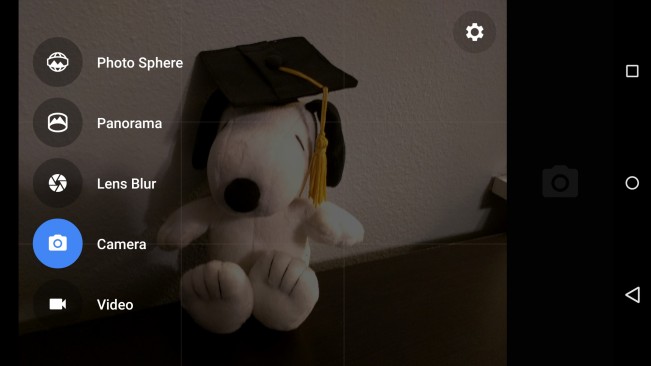 Google Camera is the stock camera app that comes preloaded on the Nexus 6, but that does not mean that it is bad. Google Camera has several cool features that you simply will not find on the other apps in our list. One is Lens Blur which allows you to blur the background around an object in the center of the photo. Photo Sphere is another feature that allows you to take a full 360-degree photo in the shape of a sphere. Google Camera also has one of the best panorama modes out there. It gives you the option to shoot video in 4K resolution and take HDR pictures. The shutter is extremely fast with almost no time between touching the shutter button and taking a picture. While Google Camera has several great features, it is also missing many features that other camera apps include such as control over white balance, shutter speed, ISO, burst mode, scene modes, and full camera control. If you are looking for an easy to use, beautiful camera app that just works, you do not need to look further than Google Camera which you can get free in the Play Store. 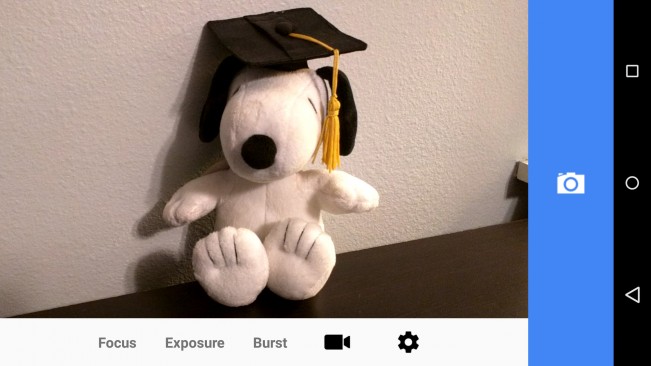 L Camera is different from the other camera apps on this list because it is not available on the Play Store. You have to download the APK from their website and install it from there. Also, L Camera is an experimental app that demonstrates and tests the new features in Lollipop’s Camera 2 API which means you have to be running Lollipop to use it. With L Camera, you are given the option for manual control over focus distance, shutter speed, and ISO. You can take pictures in RAW format and record in 4K which are both useful options. You also have the option to record video at 60fps in 1080p. One of the most appealing features of L Camera is its use of Material Design. The app looks amazing and takes Google’s new design language into account with every detail. Since this app is experimental, there are several functions that are simply not there. You do not have the option to control white balance, there is no photo review, there is no flash control, and no portrait orientation. Since the developers are constantly working to sort out every bug and bring new features to the app, it will definitely be updated to include more options. Unfortunately since it is not on the Play Store, you will have to go check their website periodically to check for new updates. All that being said, L Camera is still a fantastic looking and operating camera app that takes full advantage of the Camera2 API even though it may be lacking some features. You can get L Camera free from their website. 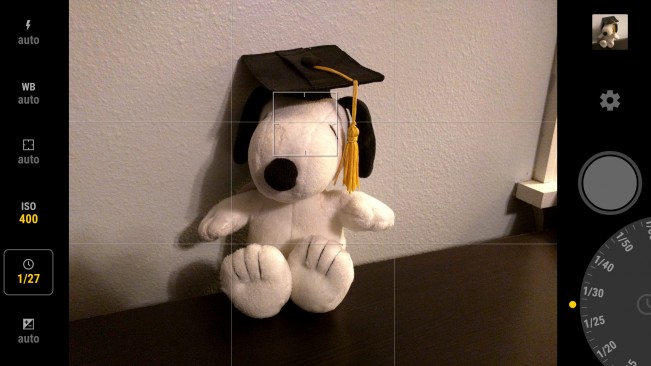 Manual Camera is currently my favorite camera app out there. This app takes advantage of Android Lollipop’s new Camera2 API which causes photos to look even better. The best part about Manual Camera is that it give you full manual control over your camera’s settings. You can control exposure, shutter speed, ISO, focus distance, and white balance. White balance is not working on the Nexus 6, but that should be fixed in a later update. You are also given the ability to capture pictures in RAW format which many will find extremely useful. On of the best features of this application is the selection wheel. When you choose a setting you want to change such as shutter speed or focus distance, you can change them by rotating a wheel in the bottom right. This is extremely well implemented and makes the app fun and easy to use. Overall, the app looks and functions very well, but there are some downfalls. As I mentioned, white balance is not working yet on the Nexus 6. Also, there is no video mode so you will need a separate video app if you want to record any. The app also requires Lollipop and, according to the description, only the Nexus 5 and Nexus 6 work well with this app. That being said, if you are using the Nexus 6 and want full control over your camera and a great looking camera app, you should pick up Manual Camera for $2.99 in the Play Store.

These 5 camera apps give you the best control of your new Nexus 6’s camera and several take advantage of the new Camera2 API that was introduced with Lollipop. Give one or all of them a try and leave a comment telling us your favorite one. If we missed your favorite camera app, tell us down below in the comments, too!