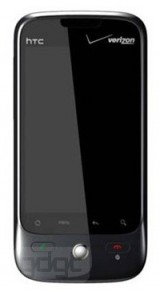 The more we hear about the Droid Eris, the more we believe our initial assumption will hold true.Â  This phone will likely end up being a Verizon-branded version of the HTC Hero.Â  They look nearly identical on the outside and now we’re hearing that they may be resemble each other on the inside.Â  BGR states that one of their sources tipped them off that the Droid Eris will sport the 528MHz Qualcomm CPU found in most HTC handsets.Â  Oh, and it will come with Android 1.5/Sense UI.Â

On the surface, this might seem disappointing when you stack it up against the recent Snapdragon stuff.Â  What good is 528MHz when the new models are coming clocked at 1GHz?Â  Even Samsung has 800MHz processors in their phones now.Â  However, if you think about it, there is a huge opportunity to hit a different demographic or user base.Â  Not everyone wants a slideout QWERTY.Â  Not everyone can afford to drop $300+ on the Droid (guessing).Â  Besides that, the Hero seems to be doing quite well for itself – here, and abroad.

Look for this to be in a Verizon store near you come next week!