Last year iconic Canadian smartphone maker, BlackBerry licensed its intellectual properties to Chinese company TCL who is now in charge of building and selling phones under the BlackBerry brand.

Now it seems that BlackBerry might be planning a similar move while smartwatches are concerned. You see, popular watchmaker Timex has recently signed a patent licensing agreement with the Canadian tech company.

The contract didn’t reveal which products or patents are involved, but given that Timex will be making royalty payments to BlackBerry we can speculate the two have teamed up to produce the first BlackBerry smartwatch. And given the latter’s reputation for making enterprise-oriented software, it can be easily assumed Timex/BlackBerry’s first wearable would be targeted at business users.

On the other hand, it’s also quite possible the agreement between the two companies is only about licensing patents and not the brand name or software. Given that BlackBerry owns more than 40,000, Timex might be considering launching a watch that includes features that are covered in said patents. Although, we’re hoping the first theory is the correct one. Actually we do have reason to believe this will indeed be the case.

“This license agreement with Timex demonstrates the strength of BlackBerry’s patent portfolio, and will enable us to focus on further patent licensing opportunities in the mobile communication market.”

That last part is interesting, as it obviously hints at the possibility Timex is indeed building a BlackBerry smartwatch.

What do you think? Would a BlackBerry intelligent timepiece made by Timex be able to revitalize the stagnant smartwatch market? 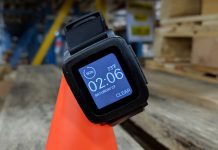