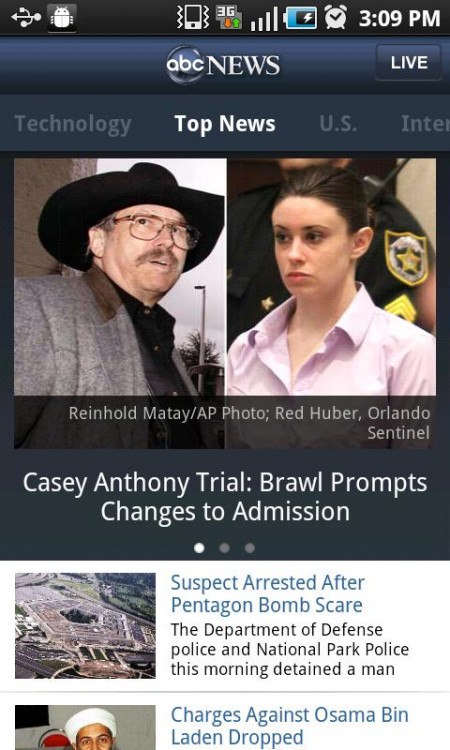 ABC News, one of the leading news channels in the United States, have finally launched their official application for Android. Now that they’ve realized Android isn’t going anywhere, bringing an app to the platform seems only natural. Android is now the #1 smartphone OS in USA, with more than a 38% share of the market. The app was already available for iPhone and iPad, and today’s news is sure to make a lot of Android users happy. “Android is an important part of our continuously expanding portfolio of digital products, and the launch of this app highlights our core strengths of providing news and video that is relevant, informative, easy to use, and helpful to our consumers,” said Joe Ruffolo, senior vice president of ABC News Digital. These are the features of app:

Advertisements
The local videos are available in following local stations:
Go ahead and download the application from Android Market and don’t forget to share your experience with us. Check out the press release below.

ABC News today launched its Android application, extending the journalism and resources of ABC News to an exciting new platform and giving Android users direct access to the excellence of ABC News reporting in the palm of their hands.

According to the latest comScore report, Google’s Android corners 38% of the smartphone market, and now Android fans will have complete access to the award-winning journalism of ABCNews.com, including rich content from “Good Morning America,” “World News With Diane Sawyer,” “Nightline,” “20/20,” and “This Week.”

The ABC News for Android app builds upon the features of ABC News’ iPhone and iPad apps including original stories, polls, show content and election results and is designed for user personalization.  Some of the new user-centric features include:

Timely and frequent live video— Watch the news as it unfolds from wherever you are with previously unseen speed and quality.

Personalized Content – Now you can save stories and relevant content to “My Favorites” for consumption later — whether you are online or not.

Enhanced local news integration –  Choose the content which is important to you with  location-based multimedia news from your local ABC station or from local markets nationwide.

“Android is an important part of our continuously expanding portfolio of digital products, and the launch of this app highlights our core strengths of providing news and video that is relevant, informative, easy to use, and helpful to our consumers,” said Joe Ruffolo, senior vice president of ABC News Digital.

About ABC News: More people get their news from ABC News than from any other source. ABC News is responsible for all of the ABC Television Network’s news programming on a variety of platforms: television, radio and the Internet.  With an average television and radio audience of 180 million people in a given month, ABC News surpasses the competition.  More than 2,000 affiliate stations broadcast ABC News Radio’s global news coverage.  In addition, ABC News NOW is a 24-hour news and information network currently available to 44 million users across cable, broadband, and mobile platforms. NewsOne, the affiliate news service of ABC News, provides live and packaged news, sports, and weather reports, as well as footage of news events, to 200 ABC affiliates and more than 30 domestic and international clients.