Back at MWC 2012, Acer officially revealed a sexy device known as CloudMobile and after long time, the device is finally available for purchase. UK famous online retailer Expansys is offering it for just £289.99 SIM-free and unlocked. After 8 months, it’s good to see the CloudMobile once again. The device was supposed to be launched on September 5th, but after one month, it’s still better late than never, right? 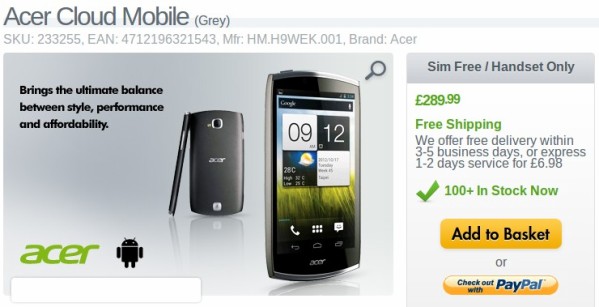 The smartphone is running on a 1.5 GHz Dual-Core processor, Android 4.0, 4.3-inch 720p HD touchscreen, an 8 MP rear camera with LED flash, 1GB of RAM, 8 GB of built-in storage and microSD support as well. And in this price, trust me it’s not a bad device to get your hands on. It’s not just an amazingly beautiful smartphone, there’s also some good dough under the hood.

If you want to grab one, then order one right now from Expansys before it runs out of stock. And let’s wait for the day when Acer will launch this phone in USA as well, and if Acer did, would you prefer picking one? Tell us about it in the comment box below.