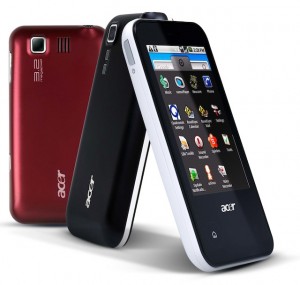 Are you able to keep up with all the Android news coming out of Mobile World Congress?  We didn’t think so.  It’s tough for us to stay afloat amidst all of these new phones being announced.  To make things “worse”, we have another pair of devices from Acer to talk about!  You’re not complaining, are you?

First on the podium is the beTouch E110, which appears to be an entry-level handset to help bridge the gap from feature phone to super phone.  With a small form factor, this device features a 2.8-inch screen, 3.0 megapixel camera, FM Radio and a 5-way navigation key.  The meat and potato specs include a 416MHz processor with 256MB ROM/ 256MB RAM.   For some reason, Acer has opted to load Android 1.5 on the handset.  The beTouch E110 gets its juice from a 1500mAh battery which much higher capacity than we expected from such a small unit.

There are a handful of pre-installed apps, including Twidroid and Facebook.  Acer is also loading up a few of their own titles – Acer Spinlets, NemoPlayer, and Acer UrFooz.  Look for the beTouch E110 next month (March) in black or and/or dark blue.

The beTouch 400 is the slightly stronger, more powerful of the two.  It runs Android 2.1, features a larger 3.2-inch screen and more horsepower.  The processor speed is 600MHz and the memory comes in the form of 512MB ROM and 256MB RAM.  Other differences include hard buttons instead of a navigation key and Documents to Go preloaded.