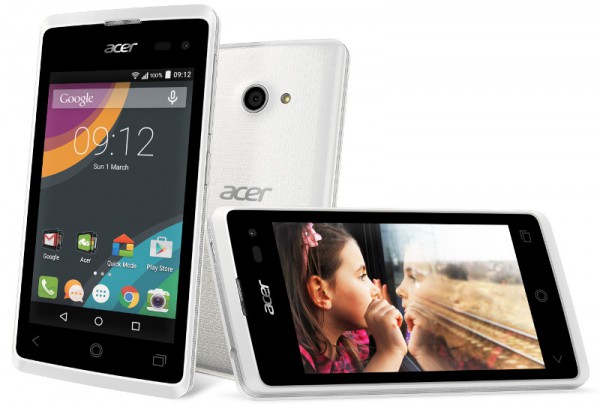 Acer on Sunday made additions to its popular Z-series of smartphones by announcing two affordable devices at the Mobile World Congress. The two new devices, the Z520 and the Z220 smartphones feature sleek design, excellent camera features and impressive quad-core performance to create a seamless mobile experience. The handsets appeal to different consumer groups adding to the growing list of smartphone offerings from Acer. The Z520 will target the users who play a lot of media on their phones whereas the Z220 is meant for those looking to buy an entry level smartphone.

The Z220 will be the first Acer smartphone to feature the Android 5.0 (Lollipop) OS and will feature 1GB RAM backed by 8GB of internal storage and comes with a Qualcomm Dual-core 1.2Ghz Snapdragon 200 processor. The device has a 4-inch WVGA display capable of generating a pixel density of 233 pixels per inch. A 5MP flash-equipped rear shooter sits on the back of the device with a 2MP front camera. The camera also allows you to control and adjust various shooting parameters such as exposure, focus and brightness letting you capture the perfect images. The sleek device also features a new textile pattern design inspired by Thai silk giving it a very elegant yet trendy appearance.

The Z520 promises to bring a host of features for media enthusiasts such as the DTS™ Studio Sound, which will deliver astonishing stereo sound with bigger sound field, higher vocal clarity and more natural details. The device comes with an 8MP auto-focus, rear-facing camera with LED flash allowing you take some crisp images. The device also boasts of a voice activated selfie camera making sure you don’t need to touch your phone to take that perfect selfie!

Both these smartphones come with Acer’s Quick Mode which comes with 3 distinct pre-set profiles catering to different customer segments based on their familiarity with the Android interface.

How to use screen pinning in Android 6.0 Marshmallow