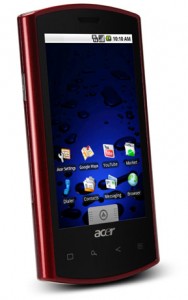 This is one of those cases where the headline says it all.  The Acer Liquid A1 handset that features the underclocked Snapdragon processor has just been officially announced in new form.  Called the Liquid E, it is essentially the same handset as before except now it has all the goodies we’re coming to love in Android 2.1 such as five home screens live wallpapers, quick contacts, and more.   It’s not know whether or not the original Acer liquid will get an OTA update to 2.1 but one would logically assume that this is the case.