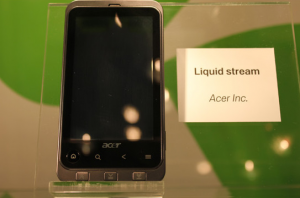 There were a handful of phones on display at last week’s Google I/O which have yet to cross our radar.  As good of a job as we think we do in keeping up with handsets, there are plenty out there we’ve yet to cover.  One such handset is the Acer Liquid Stream.  With only a display model behind a case to tease us, we were left to guess the specs.  That was until we talked to a little birdy.

According to our tipster, the Acer Liquid Stream currently runs Android 2.1 and is powered by a Qualcomm Snapdragon chip although the speed wasn’t 100 percent known.  We’d like to assume it’s the full 1GHz, but it could be underclocked to 768MHz. The phone also features a 5 megapixel camera that records in 720p with HDMI output, Bluetooth, WiFi, and GPS.  We’ll be doing our best to piece together the rest of the picture so check back often!