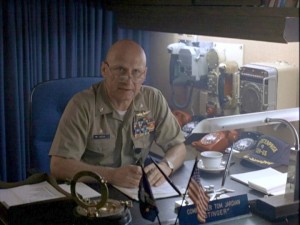 I believe the quote that I am looking for comes from Top Gun, “Son, you’re ego is writing checks your body can’t cash” in reference to the news that Acer’s CEO Gianfranco Lanci is predicting that Acer’s tablet division, which makes both Android and Windows tablets are going to go take over Apple’s early lead in the tablet market.

“While iPad has gained successful sales performance and good market response, Apple is centered around the US market with a significant leading status, but its competitive strength may not play out in emerging and other markets, this is the opportunity for Acer,” Lanci told Digitimes recently. “Sales of iPad pushed forward very fast initially, but have slowed down in the past few weeks. … We hope our tablet PCs can reach a global market share of 10 percent to 20 percent initially, and become the market leader in 2-3 years.”

Now, we certainly would not expect a CEO to be anything less than uber-positive about their products, but with Acer is going to have to step up their Android tablet game if they are going to make the above quote happen. Their two Android tablets, a 7 inch and a 10 inch, are not coming out until next April.  That is a lifetime in the technology universe, and from a market standpoint, there is going to be a flood of tablets being released starting now, not next April.  By the time they launch their devices, there is going to be a huge fight for market share in the industry amongst the different Android tablets.  The iPad, as much as I hate to say it, has no other tablets to compete with, it is all there is for Apple run tablets.

I think a more accurate statement is that Android tablets are going to take over iPad’s share in the market by sheer numbers, there is going to have to be a significant device released from Acer that is a true iPad killer, otherwise their offerings are going to get lost in the avalanche of Android tablet devices we are sure to see.  It will be interesting to see if Lanci’s predictions come true, until then, I wouldn’t be cashing those checks just yet.