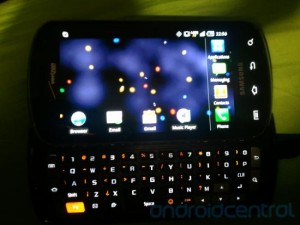 The guys at AndroidCentral have posted a few additional pictures of the sliding QWERTY from Samsung headed to Verizon in the near future.  First uncovered a few weeks back, these new images confirm a couple of details for what may ultimately be the carrier’s version of the Galaxy S II “Function“.

Among the features, we can expect support for Verizon‘s 4G LTE, Android 2.3.4 Gingerbread, a 5-megapixel camera, and a front-facing camera.  The source of the snapshots indicates that they screen is ‘awesome’, which jives with the Super AMOLED Plus stuff coming with other Galaxy S II models.

The keyboard and general form factor closely resemble the Epic 4G, Sprint‘s variant of last summer’s Galaxy S.  Maybe Big Red has dibs on the sliding QWERTY this time around?  Either way, does this appeal to you Verizon subscribers?